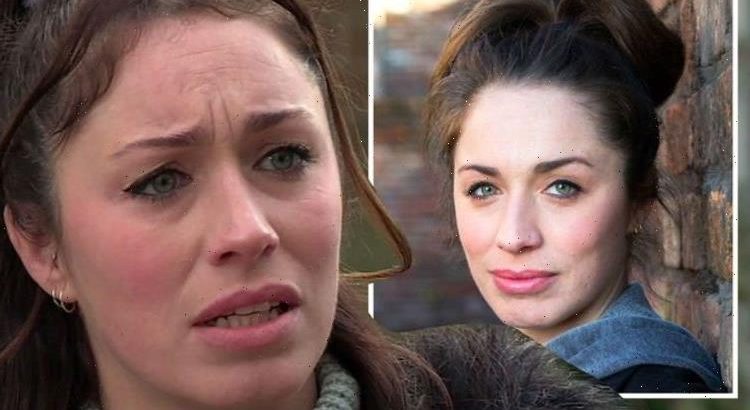 Coronation Street: Shona says Sharon is 'up to something'

Shona (played by Julia Goulding) has been taking a backseat from the drama on Coronation Street of late since she jumped down a drain hole to save Jenny Connor (Sally Ann Matthews) during storm week. However, she could be plunged into a brand new and gripping storyline in the coming months involving her stepson Max Turner (Paddy Bever). As his obsession with Summer Spellman (Harriet Bibby) becomes worse, could he end up killing his stepmother in order to get closer to his young mentor on the ITV soap?

Over the last few months, viewers have watched as Max has turned to Summer to help him with his schoolwork and she has guided him through his exams and coursework.

The young university hopeful was left furious with the young boy when she discovered he had posted an insensitive video about the night of the storm online claiming there was a conspiracy theory behind the deaths.

Once they talked things through, the pair were friends again and she even pushed him to take up videography for the greater good.

Unfortunately, this gesture of kindness have given David Platt’s (Jack P Shepherd) son the idea to put her on a peddle stool.

This would mean he would do everything in his power to ensure they could spend some more time together but in the coming months, the obsession could cost Shona her life.

David’s wife has been a surrogate mother to Max ever since her son murdered his mother, Kylie Platt (Paula Lane) several years ago.

She has been a huge source of support to him, despite being shot the Christmas of 2019 and losing her memory of her life on the cobbles.

In recent weeks, she has had to be more assertive towards her stepson as she has noticed his behaviour has become more rebellious.

Unfortunately, Shona isn’t the only person Max sees as a mother figure as Summer has taken the spot by being his friend and guiding him.

With the mother figure role in contention and his obsession with Summer growing, Max could take action to ensure the former takes the spot.

[Max’s] crush is developing on Summer

The actor who plays Max, Paddy, has teased his character’s obsession with Summer is going to reach new heights and Summer is becoming the centre of his world.

Paddy said: “I think he has a huge crush on her which has developed because she’s the only person who’s giving him the time of day at the moment, everyone else is quite dismissive of him.

“His crush is developing on Summer because she believes in him, she sees good in him whereas everyone else just sees a naughty little boy.

“He sees Summer as this positive female role model and having lost his mum that’s huge and another reason why he’s so protective of this relationship.”

This is the way Max should be feeling about Shona as his mother figure and therefore, it is possible she could be taken out of the equation if she is irrelevant.

Speaking about the Platt family dynamic as a whole, Paddy added: “For most of his life Max hasn’t had a stable family.

“He’s been moved around, he’s suffered the death of two parents, he’s had David come into the picture and then Shona after he lost his mum and that’s confusing for any child.

“It’s not been easy for Max and I think that’s where this misdirected anger comes from. Anyone in his situation is going to have a lot of frustration and anger and find it hard to process things.

“He’s far more complex than your average teenager and that was something that was exciting when I looked at playing him.

“People say to me ‘he’s a naughty boy Max’ but I think anyone in his situation would be, he’s had a really tough start to his life and there’s a lot of frustration there.”

With all this anger inside of him and his need to have Summer in his life, will he leave Shona for dead as part on a sinister plan?

As the residents of the cobbles grieve for Shona, Summer could spend a lot more time with Max to make sure he is ok.

Unaware of the youngster’s involvement in Shona’a death, the young university hopeful could put her own life on hold to be there for him.

This is everything he would want and more and he could even ask her to move in with the Platts as she is helping him with the loss of a third parent.

But as the pair get closer and closer, could Summer rumble his deadly deeds and discover he was the one who killed his stepmother?

If Shona were killed off, it would bring an end to her five-year stint on the show after arriving on the cobbles in 2016.

Last Christmas, she married David after a year of the pair trying to build a new relationship following the loss of her memory.

They have been on the strongest footing in years over the past few months and David could be left heartbroken if he loses another wife.

Could he be the one to discover his troubled stepson is the one who is responsible for Shona’s demise?