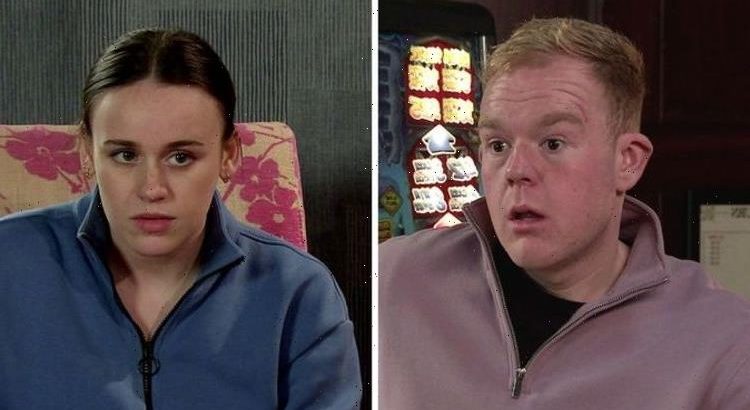 Craig Tinker (played by Colson Smith) has been edging closer to the truth about his housemates’ Faye Windass (Ellie Leach) and Emma Brooker’s (Alexandra Mardell) involvement in the death of elderly man Ted (Duggie Brown) on Coronation Street. The police constable looks set to rumble Faye’s killer secret in dramatic scenes on the ITV soap. Will this mean Craig will be forced to quit his job in the force after exposing the truth?

In upcoming scenes, Faye is left horrified when Craig informs her the police are going to conduct another thorough search of Ted’s home after suspecting foul play.

Later on, his mother Beth Tinker (Lisa George) overhears Faye asking about a job at the local factory for Craig.

She decides to probe him about the situation and is stunned to find out he’s resigned from the police force.

She later confronts Craig and demands to know why he decided to leave the force which she thought he loved being a part of.

This leads him to assure Faye leaving the force was his choice and after making the decision, he decides to talk to Sarah Platt (Tina O’Brien) about the job in packing the following day.

However, it appears as though he’s quit his police officer job after Faye confessed to being involved in Ted’s death.

She came clean to Craig after withholding the truth from him for weeks and being riddled with guilt.

The youngster was driving alongside Emma when they ran over the frail pensioner.

Ted insisted he was fine but was later found dead in his home by the girls who had decided to check up on him following the incident.

Faye and Emma have been trying to cover up evidence of their involvement ever since he was found deceased.

Faye has been desperate not to return to prison after spending several months behind bars after attacking Adam Barlow (Sam Robertson) who she had mistaken for sexual predator Ray Crosby (Mark Frost).

While she was released on bail before Christmas, she is still walking on thin ice with the police.

Now Craig is aware of her dark secret, will he turn her in or decide to keep his lips sealed as he cares for her?

Perhaps Beth will get the truth out of her son and report Faye and Emma to the police herself?

“The scripts are exciting and complicated, and funny as Emma is hapless. It’s quirky but at the bottom of it, it will trigger a seismic event in their lives,” Iain told The Mirror.

He added: “When you watch it happen, what you will feel that the decisions they make, when they add them up, it turns into a total nightmare.

“There are witnesses who can incriminate them which is a nightmare when it goes worse.

“I love stories that crash land out of thin air – sometimes they take years to manifest.”