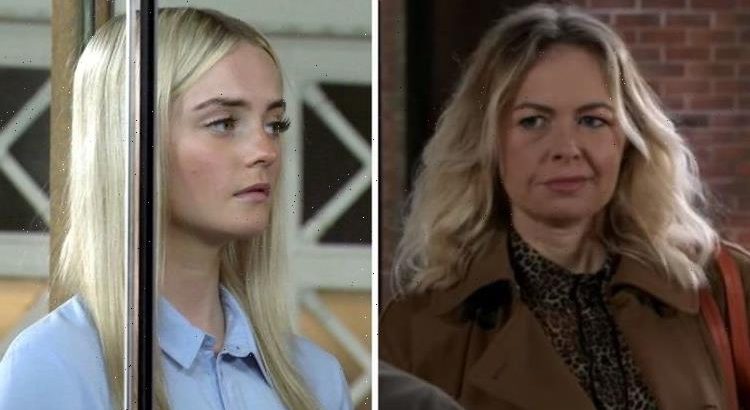 Kelly (played by Millie Gibson) has argued her innocence in Seb’s (Harry Visinoni) brutal murder ever since true killer Corey Brent (Maximus Evans) framed her as the main culprit. Monday’s episode of Coronation Street saw the youngster giving evidence in court, but she was up against a tough opponent in Corey, as it seems his dad Stefan (Paul Opacic) could be bribing witnesses to defend his son. Kelly’s final hope was for her mum Laura (Kel Allen) to provide a solid account for her in court, but the ITV soap saw further disappointment for Kelly as Laura messed up her evidence, which she claimed she was giving to protect Kelly. But could she have deliberately fluffed her court appearance after also being paid off by Stefan?

It wouldn’t be out of character for Laura, who has proved she will do anything to get her hands on some extra cash.

She even tried to sell her daughter’s story to the press while she was in prison, gathering information on what she remembers and, unbeknownst to Kelly, hoping to report back to the local paper, despite the fact it could have jeopardised her trial.

Abi Franklin (Sally Carman) recently became convinced that Stefan was bribing witnesses with jobs and money to support Corey at his trial, and Monday’s episode indicated that she was correct, with Imran Habeeb (Charlie de Melo) overhearing a suspicious conversation.

He went straight to Abi to validate her concerns, and claimed he would “find something to nail them with”.

Earlier, during Kelly’s trial, Laura appeared to accidentally make things worse for her daughter while trying to defend her.

Her evidence started off well, with the mother painting her daughter as a good person.

“There’s no way she’d have beaten up that lad Seb – no way, I know my daughter,” she argued.

But when Corey’s defence questioned her, it didn’t take long for her to slip up and present Kelly as a dangerous character.

Sabeen said: “You say Kelly was a model child, someone who looked after you, your relationship was always good, was it? Not a single bump in the road?”

But after prodding further, Laura stated that she and Kelly had numerous disagreements.

“More than disagreements?” Asked Sabeen, adding: “You were recently sent on a charge of child neglect.

“Can you tell us what you instructed your solicitor to say on your behalf about your daughter?”

The lawyer proceeded to read out a transcript as Laura claimed: “I didn’t mean it.”

Sabeen read: “I felt physically afraid of my daughter, she was violent, unpredictable and aggressive.”

It was indicated at the time of Laura’s arrest for child neglect charges that Stefan had told her to make sure Kelly gets blamed for the murder of Seb.

Could the manipulative woman have accepted a bribe and made the statement to destroy Kelly’s character in court?

While giving evidence, she pretended she wanted to take back what she had said, claiming the statement was made while she was angry with Kelly.

But this statement was soon torn apart when Laura felt she would be in more trouble.

“So you lied to get a reduced sentence?” the relentless lawyer asked.

She added: “Perhaps I should remind you that perjury is a very serious offence.”

Looking concerned, Laura changed her story, stating: “I didn’t lie, but she isn’t like that now.

“She was in a bad way – her dad had just been accused of murder.”

But she shared a brief look over at Corey, who seems to know what was going on.

Could Laura have been working to defend Corey the whole time?

She gained her daughter’s trust to speak for her in court but it was easily ripped apart by Corey’s defence, so it’s possible it was all planned.

Money-grabbing Laura has let Kelly down before, so it seems plausible she would allow Kelly to face prison if it meant there was something in it for her.

But will Imran be able to uncover the truth before it’s too late?

Coronation Street continues on Tuesday at 7.30pm on ITV.