Coronation Street aired its annual October mayhem this week, as Steve and Tracy’s wedding descended into chaos, Ali turned murderous and Nick made his long-awaited return to the show.

But which plots were must-see this week and which ones didn’t quite hit the mark? Here, we’re rounding up the highlights and lowlights with some more of our hits and misses. 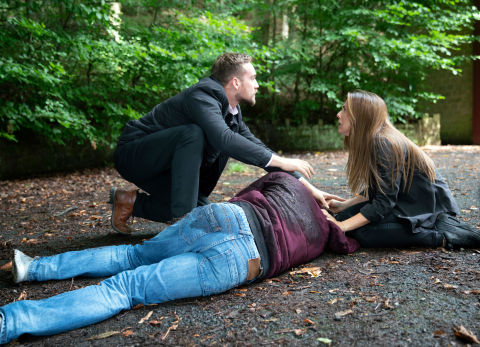 We always suspected that Corrie would need a new sinister figure on the cobbles with Pat Phelan gone, and after three months with no murders, it seems that Ali Neeson is our man. The local GP ruthlessly bumped off Ronan Truman to protect his family in Friday’s dramatic episodes, providing plenty of exciting new story opportunities for the future.

Opinion will definitely be divided among the fans over whether Ali’s dark moment should just be a one-off, or the dawning of a new reign of terror. It’d probably be refreshing for Corrie if one murder didn’t lead to several more for once, but Ali is pretty much a blank slate as a character rather than someone the viewers know well, so we reckon it could go either way right now…

MISS! What’s going on with Steve? 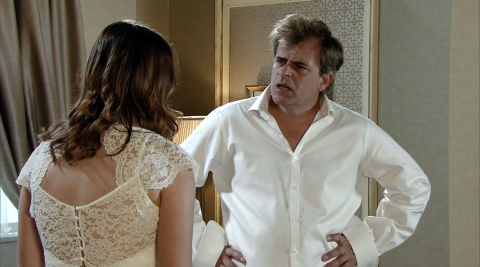 Is anyone else finding it hard to keep up with Steve’s motivations from one week to the next? One minute he doesn’t love Tracy and doesn’t want to marry her, the next he’s sleeping with Leanne on a whim, then he’s back to wanting Tracy after all and trying to make their marriage work.

While some might argue that’s just typical Steve, his characterisation has been pretty tricky to keep track of over the past few weeks. Did the desire for a big wedding day bombshell – ie Steve sleeping with Leanne – overshadow a coherent character journey here? 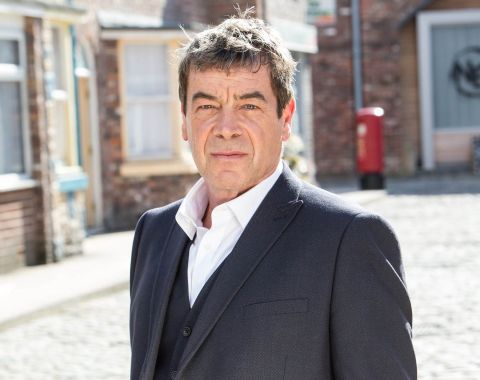 The turmoil in Johnny and Jenny’s marriage arguably deserved more screen time this week, getting overshadowed slightly by the other high-octane stories. We reckon Sally Ann Matthews (Jenny) and Richard Hawley (Johnny) were brilliant in their scenes on Friday night, as Hannah’s bombshell over Johnny’s infidelity threw a spanner in the works for their relationship.

Jenny’s desperation to believe everything was fine in the aftermath of Hannah’s claims made for some heartbreaking scenes, especially when Johnny finally ‘fessed up over his fling with Liz and she broke down. We’re definitely pretty intrigued to see what’s next for these two – can they work things out? 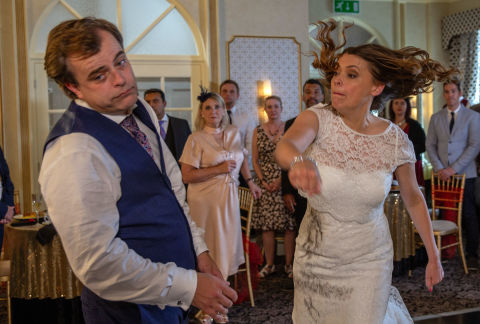 Maybe it’s just because all of the jeopardy surrounding Steve and Tracy’s wedding felt shoehorned in at the last minute, but we weren’t totally enthused by their chaotic wedding reception. Tracy violently punching Steve was played for laughs, but arguably seemed hypocritical after the show received so many plaudits for the Kirsty and Tyrone domestic violence storyline just a few years earlier.

Tracy and Leanne’s food fight also seemed like a budget version of Eva and Maria’s fountain catfight last year. At times it was hard not to compare the whole wedding saga unfavourably to last year’s Eva and Aidan ceremony, which worked much better as the pay-off to several long-running storylines. We did enjoy Daniel and Sinead’s heartwarming ceremony though – Ken and Beth definitely chose the right one to attend.

We definitely have to take our hats off to the show for managing to keep Leanne’s involvement in the big crash under wraps. Michelle, Ryan, Ali and Ronan were all in the official spoilers for the dramatic storyline, but few viewers will have guessed that Leanne would pop up to get injured in the carnage too.

Leanne’s crisis paved the way for Nick’s big return and we reckon it’s only a matter of time before these two end up back together. 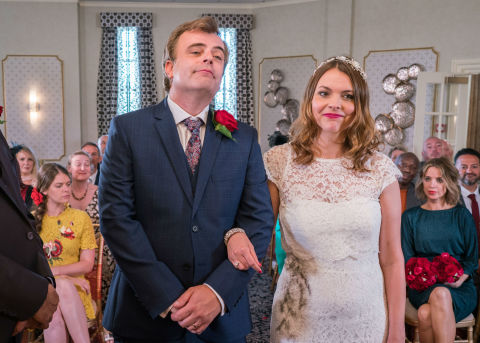 We also have to give a special mention to Kate Ford for her hilarious performances all week – Tracy on the warpath for six episodes was certainly something to behold and she had all the best lines, including her on-point impression of Sinead. (Maybe she shares a scriptwriter with Emmerdale‘s Kim Tate, who was also dishing out zingers all week?)

Of course, the funniest moment of the week was Tracy heading off merrily to Morocco with a quip about how her kidney gets homesick. How did Kate keep a straight face delivering that one?

Coronation Street airs weeknights at 7.30pm and 8.30pm on ITV.

Digital Spy Soap Scoop video – hit play below for all the latest Coronation Street spoilers, as Sinead receives her diagnosis and Nick faces a backlash.