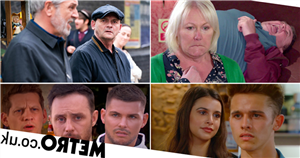 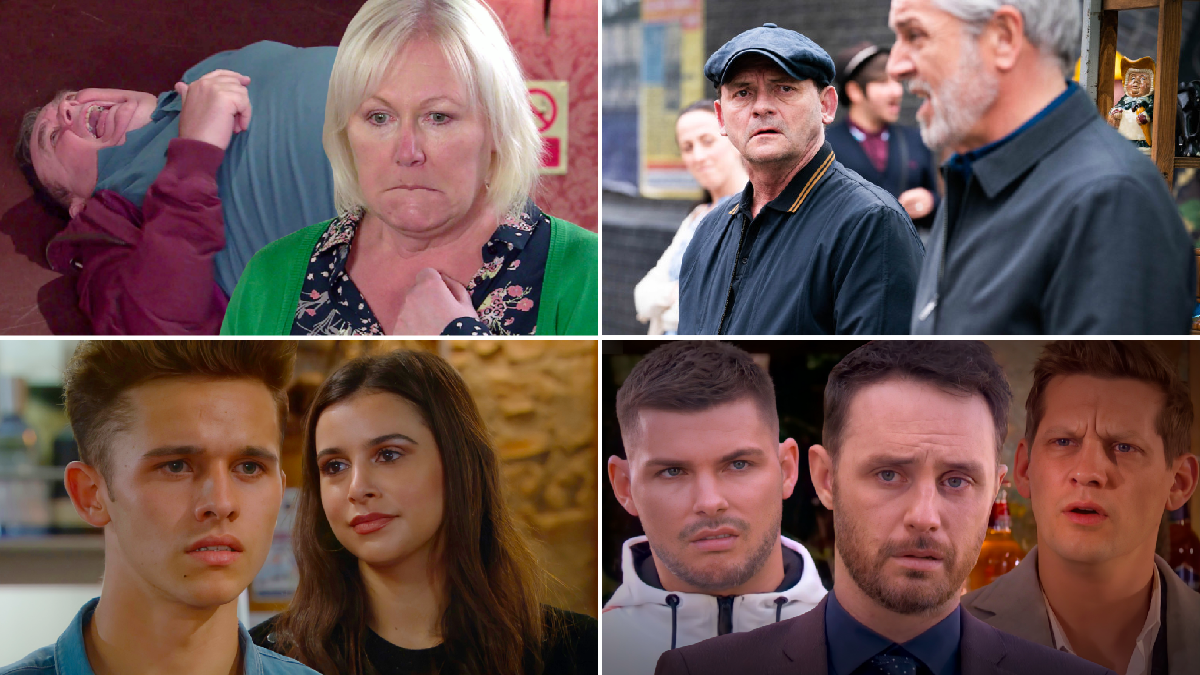 Eileen Grimshaw has had multiple brushes with death, which is to be expected when you’re married to a serial killer, but next week the Coronation Street icon finds herself having to drive a hearse with a body inside!

Speaking of death, Emmmerdale will air the aftermath of Leanna Cavanagh’s murder at the hands of Meena Jutla, but what will the ITV soap have in store for us?

Issac Baptiste takes shocking action which leaves Ruby Allen fearing the worst in EastEnders, while James Nightingale finds himself torn between his two loves over in Hollyoaks.

Coronation Street and Emmerdale ditch the box-set format and return to their usual schedule. EastEnders, however, will continue to be available to stream each and every Monday on iPlayer until the end of the Tokyo 2020 olympics, meaning that you can binge all of next week’s action in one go!

Hollyoaks, meanwhile, will air as usual on Channel 4 and E4 respectively.

But just what has soapland got in store for you next week?

1. Billy tells Todd, Summer and Will that he’s been given the go-ahead to spend £7,000 on a heat pump for the halfway house, which leads to Will instructing Todd to steal the cash from Billy! Todd thinks on it, and later tells Will he’ll need his help if they’re going to steal the heat pump. Will, however, gets his hands on Todd’s engagement ring, telling him he can have it back when he’s got the money. Todd steals the heat pump, which Ed then reports as stolen. Craig, having got word from Ed that he and Paul had fallen out, arrests Paul for the crime, as Billy and Todd watch on!

2. Eileen berates George for conspiring behind her back with Sean. However, George ends up toppling backwards, and he breaks his wrist, leaving Eileen completely mortified. In an effort to make amends, Eileen offers to help out at the undertakers, and George asks her if she told collect a body from the hospital. She does just that and parks the van outside No. 11 with the body inside. However, after lunch, they discover the van has been taken!

3. Todd returns the van to George, making out that he’d borrowed it to help a mate out who was having a crisis. He claims he would’ve never taken it had he knows there was a body in the back. Afterwards, he meets up with Will to assure him he’ll have his money within 24 hours.

4. Ryan is shocked when he wakes up in Daisy’s bed, but has he cheated on Alya? That remains to be seen, but he begs Daisy to keep shtum about what happened. Troublemaker Daisy, however, soon spills the beans in front of Alya, leaving her in shock. Alya declares that she and Ryan are over. Jenny offers Ryan a room at the Rovers, and accuses Daisy of deliberately causing trouble.

5. Fiz decides to get back in the dating game after encouragement from Sean and Beth, and she is matched with a guy called Chris. Chris, however, turns out to be a reporter hoping to run a story on aggrieved women who’ve been dumped for a younger model. Maria urges Fiz to take Chris up on her offer and do the article, as she’ll find it therapeutic. Tyrone and Alina are appalled when they see the article, and Ty confronts Fiz, evidently hurt. However, he plans on retaliating, as he approaches Daniel with a pitch of his own.

6. Steve raises £96,000 for Oliver’s fund, but resolves to take a step back. Curtis, however, has an idea, telling Emma of his plan to organise a naked calendar to help Steve reach his target of £100,000. The pair run their idea past Steve and Tracy, and in an effort to get Steve to participate, they suggest make out that they’ve offered the Mr December top spot to Dev. Offended, Steve makes out that he’d be much more suited.

7. Nick is thrilled when Natasha pops by and asks if Sam can stay the night with them. Leanne is pleased to see him so happy. However, there’s a change of plan when Natasha stops by the flat to reveal that, actually, Sam won’t be coming over after all.

8. Isaac’s auditory hallucinations prevent him from taking his medication, and when he crosses paths with Lily and Arthur, he tells him to go on a picnic and stay away from the house. He wants them out of harms way, as he attempts to break into Ruby’s! Ruby, however, catches him in the act, and she’s panicked when she can’t find the kids. Isaac, meanwhile, becomes more and more distressed, and runs into the house as Martin calls the police. Patrick attempts to gain entry, and he asks Isaac where the kids are, promising his son he won’t let anything bad happen to him.

9. Ash, still grieving following Jags’ death, has no idea where Peter is, revealing that she hasn’t seen him in weeks. Peter, meanwhile, is ignoring her, claiming he can’t handle being around her right now, much to Kathy and Bobby’s dismay. Ash asks Kathy if Peter is ghosting her, and as Peter sets off to speak with her, he sees her with another man.

10. Chelsea knocks over a plate that was a gift from Mia to Chantelle. Gray and the kids return, and she pretends that she’s going over the case.

11. Following her hearing, Chelsea has to wear an ankle tag, but is still eager to go to Gray’s work do. She wants to make the most of the free drinks, but ends up embarrassing herself in front of Gray’s boss Laura, who advises her to run while she can!

12. Kheerat is incredibly concerned for Suki, who is still struggling in the wake of Jags’ death. She’s having none of his worry, however, and heads to the Minute Mart. And she’s far from pleased when she finds Honey there running things.

13. Phil tries to convince Kat to let Tommy do a football trial. A conversation with Kim later results in Kat thinking over such a proposition, and she ultimately comes round to the idea, as she wants to show that Tommy is gifted.

14. Kathy and Terry walk by Billy’s stall, and Terry ends up winding Billy up. Billy therefore challenges him. The challenge? Whoever sells the most in ten minutes wins, obvs. Afterwards, Billy then suggests a competitive game of football. Will Terry agree?

15. Nicola reckons they Jimmy’s first day in court has gone rather well, but Jimmy’s not sure, evidently shaken by the experience. He’s evidently still prepared for the worst, something which leaves Nicola worried, as she fears her beloved hubby has given up.

16. Mandy reads aloud the speech that she’s prepared for the judge, and it’s clear that Jimmy is overcome with emotion. Both guilt and gratitude. Caught up in the moment, he leans in for a kiss. Mandy momentarily returns the kiss, before they both spring apart. Jimmy, like the last time, is mortified, and apologises. Nicola attempts to remain positive, assuring Jimmy that his flustered testimony on the stand was just that of an honest man. Jimmy, however, is riddled with guilt over his kiss with Mandy, and he rejects her positivity, as he’s utterly convinced that he’s going to prison. So much so, in fact, that he heads off to pack. But are his suspicions correct? Will Jimmy be going to prison?

17. Gabby and Noah, both of who have been spending quite a bit of time under the same roof due to Noah’s work up at Home Farm, ultimately bond. Will Noah be able to help Gabby in the wake of Leanna’s death?

18. Liv struggles with her feelings of overwhelming shame, guilt and despair in the wake of her relapse.

19. Tracy, who has been struggling since giving birth to baby Frankie, opens up to Nate, describing her feelings of inadequacy to Nate.

21. Martine struggles to hide the side effects of her chemotherapy, as she stumbles through the village, and on-lookers assuming that she’s drunk. Felix is heartbroken to discover that she has cancer, while Martine tries to focus on something else, as she goes shopping for an outfit for a night out. Her hair, however, falls out mid-try. She subsequently breaks down, just as Felix shows up with her a bunch of her favourite flowers. Martine opens up and, in touching scenes, Felix assists her in shaving her head.

22. Summer’s manipulation works, as the wedding is back on, but Sienna’s not in the least bit pleased, as she confronts her lover, and berates her for messing with Brody. Sienna’s evidently becoming insecure, and she gets into an argument with Summer regarding the wedding, one that ends with Summer admitting that tying the knot with Brody would make her dad Cormac happy.

23. James shares a kiss with ex John Paul, but John Paul makes it clear that he’s not ready to move on, and therefore James requests that he keep their kiss between them. But little does he know that Donna Marie has overheard their conversation! Donna Marie tells James she knows all about the kiss, and threatens to reveal it, unless James can get Juliet’s non-molestation order removed!

24. Liberty begs Summer to let her go. Summer, of course, refuses to do so, but she later slips up, resulting in Library getting her hands on a pair of tweezers! When Summer leaves her alone, Liberty attempts to pick the lock with the tweezers, but will she succeed?

25. Sami, desperate to get rid of Shaq, makes a phone call, and soon Shaq’s mum Hasina arrives in the village, hoping to take her son home. An argument breaks out between Hasina and Misbah, forcing Shaq to come clean with his theory about Kashif being his dad. Verity, meanwhile, tells Sami she helped Shaq do a DNA test, and they take a peek at the result. There is another twist in store.