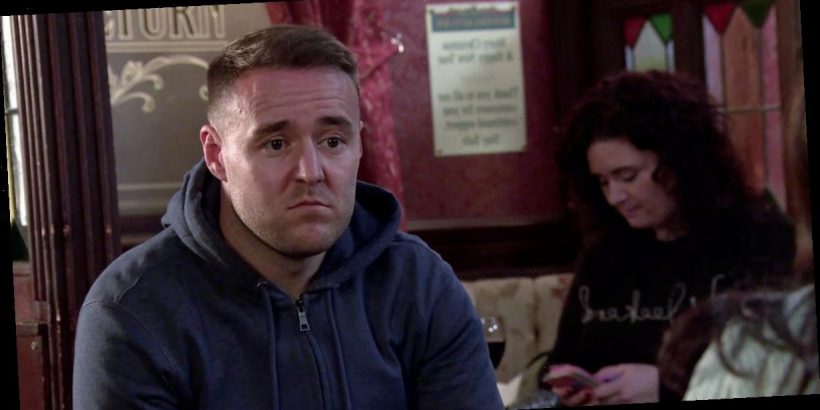 Coronation Street wouldn’t be the same without heartbreak and heart flutters, and this week’s spoilers promise just that.

And, Leanne Battersby (Jane Danson) is forced to put her life in danger in the hopes of saving her son, as Simon Barlow (Alex Bain) gets sucked into the seedy underworld of Weatherfield.

Below are the most outrageous spoilers of the week – don’t miss an episode.

When Peter shows up to work, Steve catches him stumbling and immediately assumes he’s drunk, locking him inside.

Meanwhile, Lucas (Glen Wallace) opens up to Carla about his experience of living with someone with an addiction, appealing to her vulnerable side.

When Carla happens across Steve, he says Peter has been rushed to hospital blinding drunk, convinced he has relapsed.

Carla heads to Peter’s aid, refusing to believe him when he insists he hasn’t been drinking.

Lucas asks her to move away to Devon with him, and Steve impulsively encourages her to do it, branding Peter an incurable drunk.

However, the doctor soon reveals Peter hasn’t been drinking, but simply fell ill from the toxins swirling amid his liver failure.

Carla pleads with Peter to accept her apology, but he makes it clear he doesn’t want her to stay with him out of obligation.

Meanwhile, Peter is disappointed to hear Steve encouraged Carla to leave him, and points out he’s meant to be a mate.

Ken Barlow (William Roache) is furious, and threatens to evict Steve from his home if he crosses another line – can he patch things up with the Barlow’s?

Rhydian arrives in a swish car with a stylish outfit and pleads with Sean Tully (Antony Cotton) to carry on with the business, catching his attention with his expensive gear.

Back in the factory, Kirk Sutherland (Andy Whyment) slips on the floor and is left injured, the Double Glammy boxes oozing liquid.

When Sean realises he is to blame for the accident, he quits and asks Eileen Grimshaw (Sue Cleaver) if he can keep the dodgy boxes at her house.

She refuses, taking Todd Grimshaw’s (Gareth Pierce) advice after he pointed out she lets Sean walk all over her.

Sean is convinced he can become just as wealthy as Rhydian, but Todd realises his car is on a lease, suggesting he isn’t as rich as he pretends to be.

Rhydian spins Sean a lie, claiming he can afford any car he likes and praising his work so far with the business scheme.

Sean is flattered when he’s asked to host his next recruitment seminar, and things are taken up a notch when Rhydian leases him a flashy sports car.

As Sean’s head fills with notions, Todd is exasperated, realising he has fallen victim to a pyramid scheme.

Will Sean escape the business before it’s too late, or will money – and friendships – be lost in the months to come?

Simon’s in over his head

Ken Barlow tries to talk to Simon about his involvement with the gang, taking him to the cafe for a heart-to-heart.

However, it doesn’t stop him from seeing Jacob, and Leanne is stricken to see the teens arrive back at her place with their gang.

Simon learns Jacob has been stealing from their boss Harvey, and when the drug lord confronts him about it, he assures him of his loyalty.

When Harvey offers him a promotion, Simon tries to escape the business altogether, but the drug boss reminds him he owes him £2,000.

He asks Leanne for help, but when they learn Kelly has overdosed on the drugs Simon supplied, they realise they can’t turn to the police.

Determined to save her son, Leanne vows to tackle Harvey herself – but will she survive the confrontation?

Asha’s ex Corey Brent (Maximus Evans) behaves horrifically when he learns she is dating Nina, insulting the young couple before storming out.

While Asha is pleased, she later realises Nina is growing more distant, and tries to save their relationship.

Asha books a hotel for the night, but Dev Alahan (Jimmi Harkishin) gets the wrong idea and confronts Nina, accusing her of rushing things.

Nina opens up to Asha and suggests they should stop dating and go back to being friends.

Asha is heartbroken and decides to go on a bender, asking Kelly Neelan (Millie Gibson) and Summer Spellman (Harriet Bibby) to get wasted with her.

Kelly buys some pills from Simon but ends up unconscious, leaving the girls panicking and calling an ambulance.

After the trip to the hospital, Dev instantly assumes Nina had something to do with it and confronts her for a second time.

Nina explains she split up with Asha, but asks Dev to be kind to her as she’s going through a hard time.

Is this the end for Asha and Nina, or could they revisit their romance when they feel more ready?

Tyrone has recently found a passion for yoga, and Alina also attends the local class, but when she reveals this to Fiz, he gets a little bit awkward.

Picking up on his body language, Fiz suggests he has a crush on young Alina, and then claims she too beautiful for an older man like Tyrone.

Meanwhile, Alina is devastated when she learns her family dog in Romania has died and turns to Seb Franklin (Harry Visconti) for emotional support.

Seb fails to see how much the news has hurt her, but when Tyrone bumps into Alina on the street, he offers the sympathy she needs.

Tyrone tells her about his late pet dog Monica, sharing in her grief, and later, when Sarah Platt (Tina O'Brien) tells Alina she can't take any time off to mourn her dog, he fights her corner.

Alina is grateful, and the incident leaves her looking at Tyrone in a new light.

Heading to the pub with Seb, Alina admits she has her eye on someone new, leading her ex-boyfriend to wonder who it could be.

If Alina makes a move on Tyrone, will he give in and break his trust with Fiz, or will he stand by his family and put their flirtation aside?