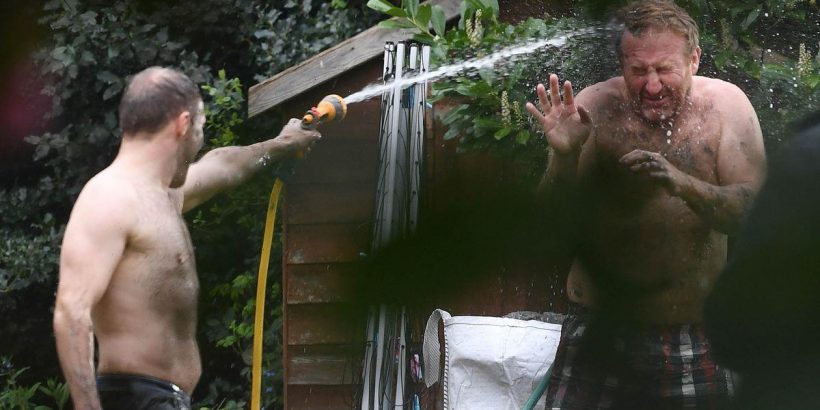 Tyrone Dobbs and Phill Whittaker are fighting dirty on Corrie.

The pair are locked in a long-running feud over Fiz Stape (Jennie McAlpine) in Coronation Street.

And our amazing snaps show the moment things reach fever pitch at the house which Phill (Jamie Kenna) has been renovating.

In hilarious scenes, the enemies end up scrapping and get covered in dirt.

A show insider said: “The rivalry between Tyrone and Phill isn’t going to end any time soon.

“There’s a lot of bad blood between them.”

Who do you think will win Fiz's heart? Have your say in the comments below

Tyrone (Alan Halsall) is struggling to cope after Fiz took their two children, Hope and Ruby, to live with her and new love Phill. The scenes will air on Corrie later this year.

They provided a chance for show favourite Alan to show off his new physique.

In recent years he has toned up after starting a fitness regime.

The storyline has led to some even suggesting Coronation Street could get its first ever throuple. That could be the way things are headed, as tension escalates between Fiz, Tyrone and Phill.

Ty is desperate to get Fiz back after his epic mistake, just as she is planning to settle down and buy a house with ex-council worker Phill.

Corrie has begun filming another epic showdown for the pair – with them squabbling at Fiz and Phill's new house, ending up slathered with cement among the renovation work.

And fans think that tension could escalate into something a lot steamier.

Taking to Reddit, one eagle-eyed fan penned: "When are Tyrone and Phill just going to get it on?

"The sexual chemistry is there for all to see and now it looks like they're going to have another one of their childlike 'fights' like at Christmas and fling mud at each other.

"Why don't they just become a throuple?"