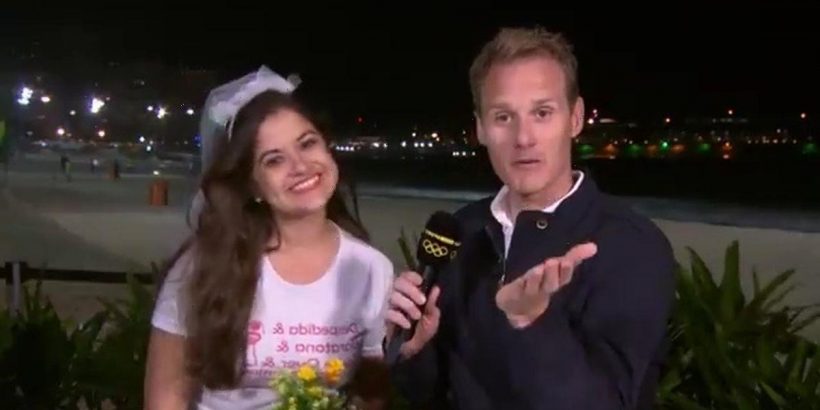 Olympics presenter Dan Walker has opened up about when a hen party interrupted his since viral Rio 2016 Olympics coverage.

Taking to Twitter, the presenter confessed that five years later he is still in contact with the bride who crashed his coverage.

When the Rio de Janeiro Olympic Games were in full swing in August 2016, Dan was presenting for BBC Four and hadn't anticipated the interruption to their broadcast that would gather attention around the world.

The buzzing hen party for Maria De Cezar's 2016 wedding were passing by when the bride was invited onto the broadcast for a chat.

In a sweet moment that was broadcast to millions she sent her love to her husband, calling him her 'crush' as her hen party loudly chanted at the barrier.

Now five years on, Dan has brought attention back to the viral moment and even revealed that they're still in touch.

"Five years ago this week, on Copacabana beach, this happened on live TV…," he wrote alongside a five minute clip of the infamous moment.

He didn't stop there, taking a stroll down memory lane the presenter continued in an additional tweet: "The next day @mariadecezar’s mum, Hercelia, came down and invited us to the wedding and it wasn’t long before we had another visitor on the beach.

"For those who remember the show, you might also recognise a few regulars."

The wedding took place just one month later in September 2016, sadly Dan couldn't make it there in person but that didn't stop him from being a part of the special day.

In a bizarre twist, the happy couple went on to be photographed holding printed out images of the presenter on their special day – which Dan shared on his Twitter.

He wrote: "This is where it gets beautifully bonkers… sadly, I couldn’t make the wedding so @mariadecezar’s mum printed off a picture for all the guests.

"Maria remains a friend and is still married to Everaldo. They have a beautiful daughter called Joana."

He went on to tell his followers that the happy family went on to relocate to Portugal and that they still talk to this day, the impact of that initial interaction having moved him so much he went on to write about it in his book Remarkable People.

He finished his Tweet thread by calling Maria "the brightest light in what was an unforgettable time in Brazil" – one Twitter user suggested they'd been moved to tears, asking if anyone had been chopping onions.

The BBC’s Olympics Breakfast Show airs every day from 6am to 9am on BBC One.