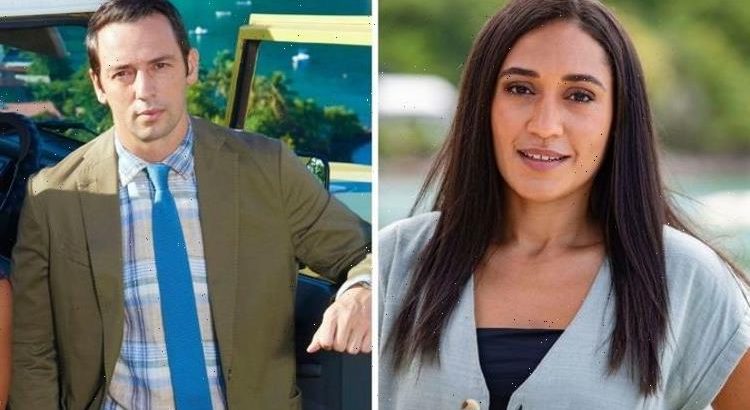 As Florence (played by Josephine Jobert) was in France with her family, she video called DI Neville Parker (Ralf Little) and he asked her out on a date. However, disaster struck when the Death in Paradise detective’s screen froze and he believed Florence could not hear him. It was at the end of the episode when Florence revealed to Catherine (Elizabeth Bourgine) she had heard everything and didn’t know what to do. If she decides to accompany Neville on a date when he returns from his trip to London, she may be left heartbroken if he returns engaged to another woman.

Neville tried desperately to keep his feelings for Florence under wraps until he built up the courage to tell her how he felt in the season 10 finale.

Florence was getting ready for a date when Neville appeared at her door.

As he began to reveal his feelings, she pointed out he had a mosquito on his head and whacked him.

However, he ended up being rushed to hospital with a nose bleed and failed to ask Florence on a date.

Encourage by Catherine, Neville tried again and on a call with Florence, he asked her out once again.

As Neville waited for an answer, it was revealed Florence had frozen on screen and the detective gave up.

Neville never tried to speak to Florence again and at the end of the instalment, prepared to head back to London with Dwayne Myers (Danny John Jules).

It was then Florence detailed their call to Catherine who was keen to find out what she would do.

Florence was unsure whether or not to date Neville and fans will have to wait until season 11 to find out if they do end up together.

However, with Neville seemingly giving up on his chance of a romance with Florence, he could fall for another woman in London.

As he celebrates the New Year, could Neville meet someone new and pop the question?

Neville’s fiancé could then accompany him back to Saint Marie so they didn’t have to work long distance.

By the time Neville returns to Saint Marie, Florence could have decided to go on a date and surprise the detective.

However, when she arrives at her home, she’d be shocked to find another woman there.

Neville would then have to explain he returned to Saint Marie engaged meaning he cannot pursue a relationship with Florence.

Florence would be left heartbroken to discover she’d missed her chance to tell Neville how she felt and be forced to watch him move on with someone else.

It comes after actor Ralf explained he has thought about leaving the role of Neville Parker.

Speaking on a Facebook Live with Radio Times, the star commented: “I don’t mind that nothing has been discussed. I only arrived in the UK two days ago.

“Nothing has been discussed and people are moving towards Christmas. I don’t think anyone is going to start having those conversations until in the New Year.

“It has been a wonderful ride already and we’ll see what happens.”

Death in Paradise returns to BBC One at 9pm on January 7.