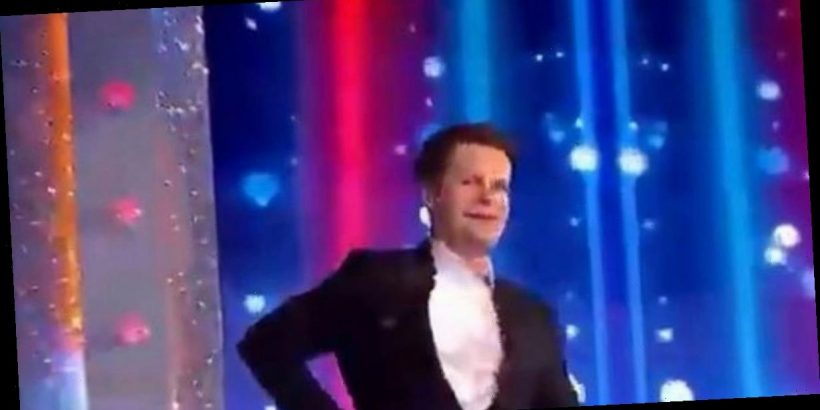 Declan Donnelly has sparked concern amongst fans after revealing he injured his back while filming Saturday Night Takeaway.

During this weekend's show, guest announcer Alesha Dixon welcomed Ant and Dec to the stage – prompting Dec, 45, to let slip about his injury.

The Britain's Got Talent judge said: "Guess who's back?, it's the one and only Ant McPartlin."

As Dec walked out, she continued: "Guess who's really hurt their back?"

As she did, Dec appeared to grimace in pain and clutched the small of his back.

Keen to make sure his pal wasn't in agony, Ant asked: "Are you ok?"

Later on in the show, Dec shed more light on the incident, adding it happened during a game of basketball.

Trying to play down the injury, the cheeky host smiled: "I'm fine now thanks for asking."

Twitter was quickly awash with messages from concerned fans worried about Dec's incident.

One fan wrote: "Has Dec actually hurt his back?"

Another added: "Awww bless Dec has hurt his back and he's fully carrying on as he usually would like the trooper he is."

Meanwhile, a third chimed in: "Dec's back hurts? BRO ME TOO."

Also during Saturday's show, Ant and Dec revealed that a series of strange TV moments last week were down to them.

The pair had enlisted Stephen Mulhern to take over Good Morning Britain, Lorraine and Loose Women as part of a sketch.

Lorraine was forced to do what she was secretly being told off camera by Stephen during her live TV interview with rapper KSI.

In a bizarre 10-minute segment, Lorraine complained a fly was buzzing around her, that she suffered cramp and that a mouse had invaded her studio.

During the chat, Lorraine told the star time and time again that she wanted to see him in person.

She was then caught doing a large yawn as the camera cut away.

At one point Lorraine, 59, complained she was suffering from cramp and had to get up to try and walk it off as the singer looked on baffled.

Halting the interview, Lorraine told KSI: "Oh darling I'm sorry.. I got cramp in my leg

"Ah sorry it's really annoying. It's poppycock that is what it is."

Lorraine then complained about a mouse running in the studio as the camera zoomed out but one couldn't be seen.

Getting up out of her chair, the star appeared to be looking for the mouse before sitting back down and carrying on the chat.