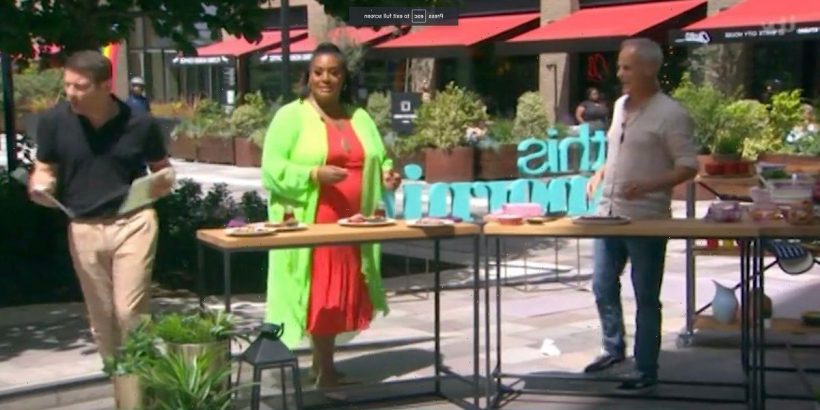 This Morning presenter Dermot O’Leary was forced to race off set during Friday’s episode of the popular daytime show, as climbing temperatures scorching the UK, began to damage the iPads he uses with fellow presenter Alison Hammond.

The pair had been filming outdoors during the summer heat as chef Phil Vickery showed them how to make their very own ice cream to help cool down in the midst of the heatwave.

Yet partway through the segment, Alison noticed that a warning had appeared on the screen of the iPad, stating that the temperature was too high, meaning it needed to be removed or risk suffering permanent damage.

“So I’m just taking the iPads out of the sun, because it says the temperature is too high,” said Alison.

After Alison Initially tucked them under the table, Phil warned that she could stand on them, leading the star to hand them to Dermot, who promptly raced off screen.

As he made his departure, the presenter could be heard exclaiming just how hot the tech devices had become during their short time outdoors as he said “Ow!” before racing off screen to cool down the expensive devices.

The on air gaffe did serve as an important reminder to viewers at home of some of the often overlooked issues caused by the current hot weather.

While sun cream, hats and sunglasses might immediately spring to mind, or even pet safety such as not knowing when it’s too hot to walk your dog – not everyone remembers that climbing temperatures can damagw electronics such as mobile phones, tablets and laptops.

According to tech experts at Lifewire, one top tip to help prevent your electronics from getting fried, is to turn them onto aeroplane mode, to limit battery consumption and help to reduce the core temperature.

They also advise keeping your devices out of direct sunlight.

Apple also advises against using your device in excessive heat, with iPhones in particular having an optimum ambient working temperature of between 16° to 22°C.

Anything higher than 35°C risks permanently ruining the battery capacity – which is bad news for some parts of the UK, as temperatures have already been predicted to climb to as high as 34°C.

The news comes as the UK experienced its hottest day of the year on Friday, with thousands of people from all across the country racing to the Island’s beaches in the hopes of enjoying the hot weather.