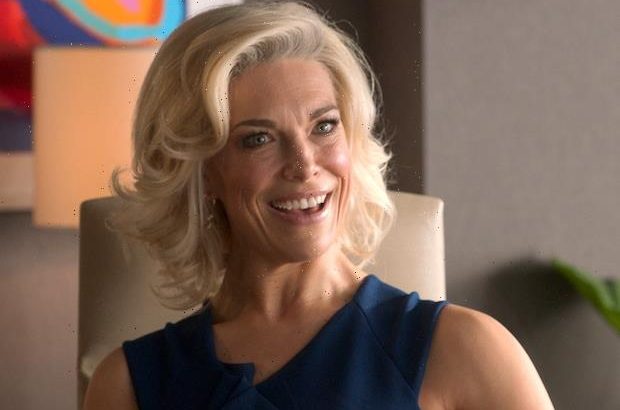 Do you believe in communism — err, rom-communism? What about a potential romance between a biscuit maker and a biscuit connoisseur? 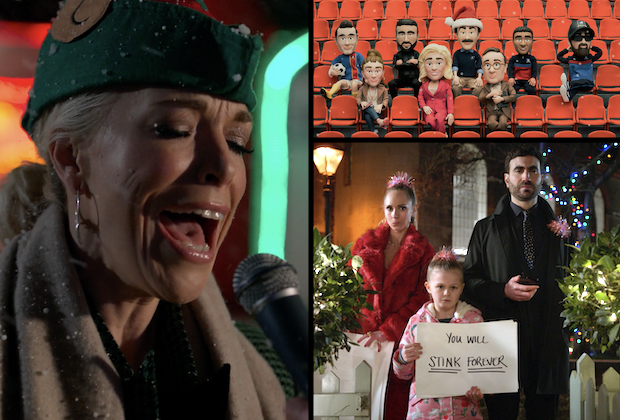 Friday’s Ted Lasso goes there (or at least hints at the idea of going there) with the eponymous Midwestern coach and “Bossgirl” Rebecca — and you probably have an opinion on the matter.

Throughout Season 2, Episode 5, Rebecca chats with her Bantr match, known only as “LDN152.” Asked what she’s looking for on the dating app, AFC Richmond’s team owner answers, “Love, I suppose.”

While in attendance at Richmond’s match against the Owls, Rebecca tells LDN152 that she’s at a football match. But when her mystery man asks her what team she roots for, she responds, “That’s too personal.” Upon seeing Rebecca’s response, Keeley encourages her friend to be upfront. “Tell him that you own Richmond and you’re f–king fit,” she says. Rebecca chuckles, then writes back. 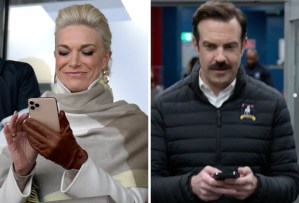 As she’s typing, we cut to Ted inside Nelson Road. He is walking down a corridor, towards the field, and looking down at his phone. Soon enough, he looks up, grins, then puts his phone in his pocket. Even after that, he’s still smiling.

So, has Ted just found out that he matched with his boss? Or is the cut to Coach Lasso intended as a red herring? Before you answer that, let’s run down some of the best moments from “Rainbow”:

INTRO TO ROM-COMMUNISM | After reviewing tape of their latest loss, Coach Lasso attempts to lift the team’s spirits by sharing his worldview. This prompts all the players to list off some of their favorite romantic-comedy stars. Among them: Drew Barrymore, Matthew McConaughey, the three Kates (Beckinsale, Hudson, Winslet), Renée Zellweger (whose knack for physical comedy earns snaps from Jamie) and Jennifer Lopez. “If all those attractive people, with their amazing apartments and interesting jobs — usually in some creative field — can go through some lighthearted struggles and still end up happy, then so can we,” the coach insists. “Believing in rom-communism is all about believing that everything is going to work out in the end.”

HOW I MET MRS. HIGGINS | When Rebecca turns to Leslie for dating advice, the communications director shares the story of how he and his wife Julie first met — and it’s adorable. “The night I met my wife, I was attempting to be a brooding punk with hair spiked out to here,” he shares. “And then ‘She’s a Rainbow’ [by The Rolling Stones] came on, and I started playing upright air bass — but I had a pint in my hand and wound up pouring beer all over my head. Everyone in the bar laughed, except for one person who handed me a damp, disgusting bar towel. And I’ve been married to her for 29 years.” D’aw! (Fun fact: Mrs. Higgins is played by Jeremy Swift’s real-life wife Mary Roscoe.)

THE POWER POSE | After Rebecca shows Nathan and Keeley how she presents herself in front of a room full of intimidating football club chairmen, Nathan tries to replicate it in the mirror at A Taste of Athens, as a means to boost his confidence. In doing so, Nate the Great ultimately secures the table by the window he wanted for his parents’ anniversary dinner. 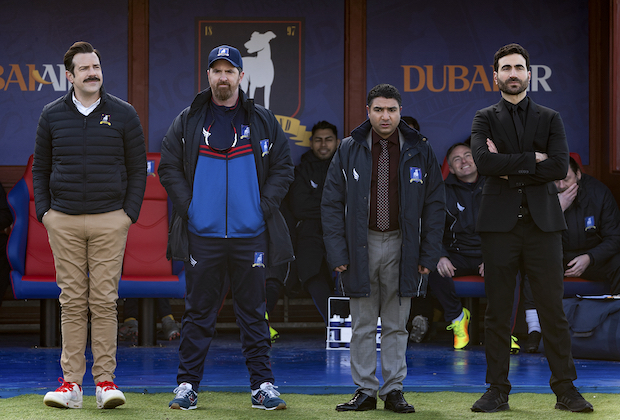 ‘YOU HAD ME AT COACH’ | Roy’s journey back to Nelson Road, where he accepts Ted’s coaching offer, borrows from several romantic comedies, including When Harry Met Sally and Jerry Maguire — and it made me as happy as anything in last week’s Christmas episode. It will be interesting to see how the expanded coaching staff affects Nate’s newfound swagger; the former kit man was clearly caught off-guard when Kent stood beside him on the pitch.

OK, now it’s your turn! What did you think of Friday’s Ted Lasso? And are you pro-Ted and Rebecca… or anti-Ted and Rebecca? Vote in our poll, then sound off in Comments.