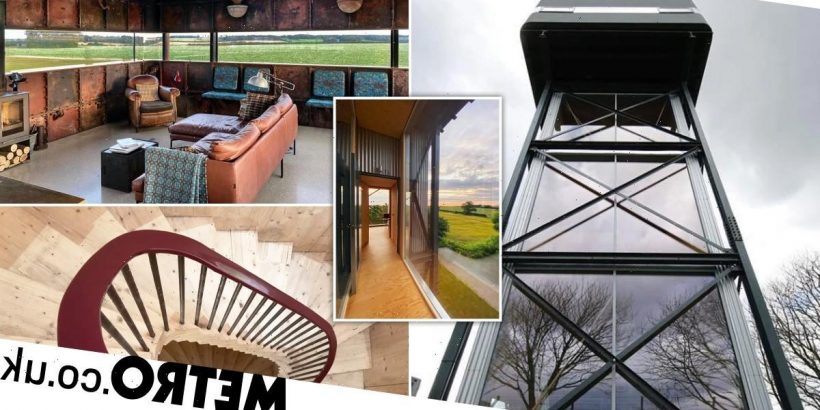 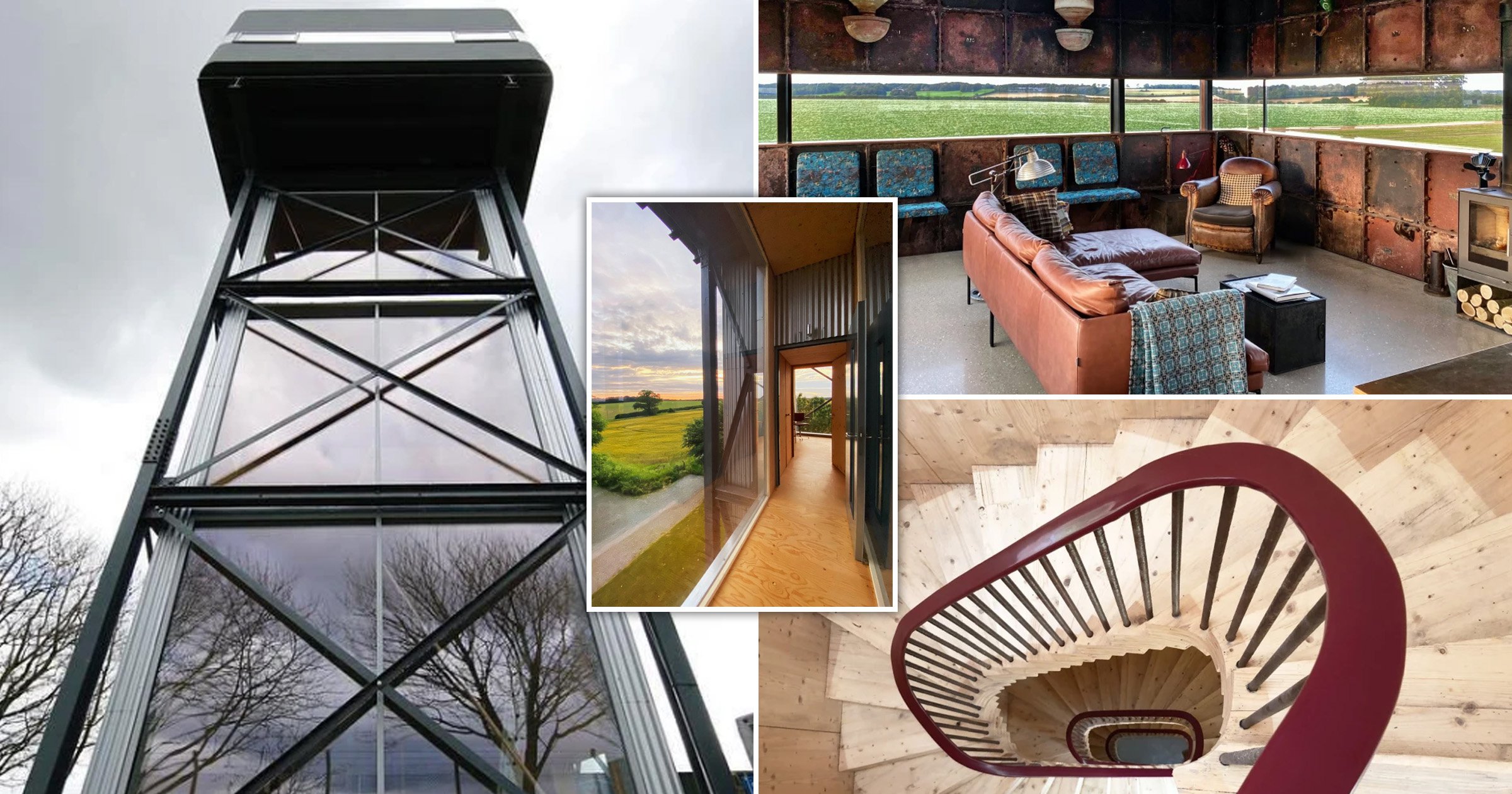 ‘Have you ever heard of The Jetsons?’ asks Dennis Pederson. ‘They go from tall building to tall building – it’s what we thought the future would look like.’

As far as inspiration for a holiday home goes, a 1960s cartoon family who lived somewhere in the distant future is a tricky one to realise – unless you have managed to get the keys to a 1930s water tower.

Looking at Dennis’s transformation of Castle Acre Water Tower into a residential home, with three storeys of living space and corrugated aluzinc sides, towering above a Norfolk field, it is clear that his passion project is not only outstandingly unique, but something you could imagine George and Jane’s flying car parked outside.

It has also been shortlisted for a prestigious Structural Award, a long-running programme which celebrates the very best work in the structural engineering community. The project started, like a lot of dicey purchases, on an internet auction site.

Having borrowed a holiday home from friends who were living abroad to get out of their London home at the weekends, Dennis and wife Misia Godebska had become accustomed to a more rural way of life.

Having inherited a small amount of money the couple decided to look for a place of their own in the country.

‘It could have been anything, a boat in a field, but something in the countryside,’ says Dennis. ‘And then this turned up on an auction website. We thought we’d have a look. We decided against it as the plot was OK to be used as a little campsite – but it was two hours from London and a bit too far.’

When bidding started there was only one other person – believed to be a scrap metal dealer intent on ripping down the dilapidated hundred-year-old water tower that many people in the nearby village of Castle Acre fondly remembered climbing at some point in their lives.

Dennis sensed a bargain and after a few bids bagged the whole 400sq metre plot and a rusting monolithic metal block on stilts for £25,000 in 2014.

‘The whole thing was a risk – but I am quite a risk-taking person,’ he says. ‘I don’t like doing the norm if I can help it. Initially we just came and camped for the summer. But we have various arty and architect friends and started coming up with some ideas.’

There was electricity to the tower, to monitor the water levels at one time, and new pipes could be laid through the existing pipework that would have fed water to the nearby village. But before anything could be done planning permission had to be gained.

‘I spent a long time in the pub in the village,’ he laughs. ‘People wanted to know what we would do with it. I bought a rusty Land Rover off someone, too. Everyone was having a laugh because I’m the guy who buys rusty things.’

The couple made models and had an open day to help bring local people in to the vision of sympathetically saving the tower. They listened to concerns and changed the plans where necessary, until one day permission was granted.
Work with architects Tonkin Liu, work could now start.

The internal piping and framework was removed and the steel frame was infilled with two sleeping pods and a downstairs recreation area, dubbed the garden room.

A cross-laminated stair tower sits to one side, reminiscent of a NASA launch tower, connected by two glazed bridges to the pods and stabilizes the whole structure.

At the top, the steel tank became a living room, with a 360- degree panoramic ribbon window cut out of the metal all around.

All of the cross-laminated structures – that is everything apart from the steel water box at the top – was designed on CAD and delivered as a gargantuan flat pack that was assembled in just a couple of weeks.

The windows, which mimic a castle in their seemingly random placement, were already cut. The local hardware store must love Dennis – in total he spent £6,000 buying his own screws to assemble it. ‘We had not built anything before, it was all new to us,’ says Dennis. ‘When they put in the pods and staircase in three weeks it was super exciting. But then we had to do the wiring and plumbing and door frames, it’s never-ending after that. It went on and on and on.’

The whole project took six years. Dennis’ Jetsons dream stands above a barley field like a cross between a futuristic barn and a space station fortress. A clock on the side faces the village as a thank you, allowing local dog walkers to know when it is time to head home for supper.

Inside it is kept as bare wood, with minimalistic intent – as if Le Corbusier had favoured plywood over concrete.

‘I am a painter and decorator by trade,’ Dennis says, ‘and I didn’t want to paint another house.’

The en-suite shower rooms are filled with coloured fibreglass making them waterproof and also reflecting the outdoors – the first is earthy, the second green and finally the top one sky blue.

The sleeping pods are adorned with a single chair, picked up in an antique shop, and there are 1960s bedside lamps bought from eBay. A pair of binoculars and a giant window at the end of one of the beds take the place of a TV.

Both bedrooms have mezzanines for children to sleep on and use ladders repurposed from the original building.

Galvanised piping carries wiring in the downstairs garden room and an Ikea sofabed has been hacked with a plywood reskin to fit the wooden theme. Follow the castle-like staircase as it plumes upwards and eventually reach the water container-cum-living room-cum-observation post.

The rust is still there, the old stopcocks being repurposed as lights, different parts of metal work now serving as railings and bars. A Heals sofa and a green barber’s chair mingle as if in a Jules Verne dream. Dennis enthuses as if it is the first time he has entered the room.

Seating inspired by those found on London Transport can be unclipped and reattached anywhere on the walls around the room.

‘The idea is that when the wind blows the balustrade at the top makes a humming noise so sounds like a spaceship. We designed the chairs like bus seats – they have a look of transportation so you feel like you can actually take off.’ There is one more ladder, this time going up onto the roof. In all its bluster in the Norfolk autumn air it seems fitting this is the last outpost of such a brave project.

‘It’s an incredible place to be,’ says Dennis. ‘It has made me feel in touch with nature. You see a kestrel hovering, watching the seasons change, day to day. A lot of the family and neighbours were involved and I thank them all. I feel extremely lucky.’

How to get your Metro newspaper fix

Metro newspaper is still available for you to pick up every weekday morning or you can download our app for all your favourite news, features, puzzles… and the exclusive evening edition!