It was Patrick Troughton's second Doctor Who who, back in the 1960s, offered us this pearl of wisdom: "There are some corners of the universe which have bred the most terrible things. Things which act against everything we believe in. They must be fought."

Those words, and decades of action peppering an almost thousand-year-old life, have defined The Doctor, Gallifrey's last and lonely son, a source of great selflessness, if not actually a man of action in the truest sense of the phrase.

The 11th television iteration of The Doctor – there are a few more if you include the large and cumbersome mythology of spin-offs and strange projects over the decades – lands with glorious mischief but immediately plays to that core mission statement: the protection of those too vulnerable, or unaware, to defend themselves.

Within the larger story, The Doctor of Doctor Who fame is a Time Lord from the planet Gallifrey, a wanderer in time and space who abandoned that social order and instead sought to feed a hunger for exploration, investigation and, where warranted, somewhat presumptious interference.

Each has regenerated to the next when a body becomes old or an actor is anxious to move on. (And on the odd occasion, when the series was placed on hiatus or, in one case, an actor was for all intents and purposes sacked.) But the upshot is the same: a blast of regenerative energy and presto, changeo, kaboom, a new Doctor.

This regeneration comes with an added twist: Jodie Whittaker's Doctor is the first to be played by a female actor and while it may have generated acres of online chatter it was an issue in the season's premiere for a nanosecond. As it ought to be. Whittaker is perfectly cast, and her immediate command of The Doctor's vocabulary and innate sense of wit is obvious.

There was chatter too that the show's new cast – Whittaker's Doctor plus companions Bradley (Graham O'Brien), Ryan (Tosin Cole) and Yasmin (Mandip Gill) – would overfill a time-travelling Tardis more accustomed to one Time Lord and one companion in the Tom Baker plus Elisabeth Sladen style which is, of course, much loved by fans.

But this reboot in a sense returns Doctor Who to its origins in 1963, when The Doctor was accompanied by schoolteachers William and Barbara and granddaughter Susan. For a mad moment the show was going to be properly educational, but that packed Tardis took on a long arc of adventures before the more recent two-hand structure took hold.

The show's tone, too, seems to yearn for that first decade, where genuinely little was known about the mysterious time traveller at the centre of the story. It's hard to see Whittaker in the way, given so much of the show's history is now in the history books of modern pop culture, but it's refreshing to think this is a Doctor Who with a blank whiteboard driving its storytelling.

In the very best tradition of protecting everyone from spoilers, little real detail about Whittaker's season is known, except that there will be no interaction with classic villains from the show. That means no Daleks, no Cybermen, no Ice Warriors. Nothing that dips too deeply into the old days, aside from some gentle and subtle nods to the past.

It's a nice reboot in that sense, but a departure from past showrunners Russell T. Davies and and Steven Moffat who both took great delight in playing with the iconography of their childhood memories. Don't think for a moment that new showrunner Chris Chibnall isn't an old school fan – he is – but he's cleverly opened the field for a wider audience, and perhaps a return to the infancy of the show where there were, genuinely, limitless possibilities. 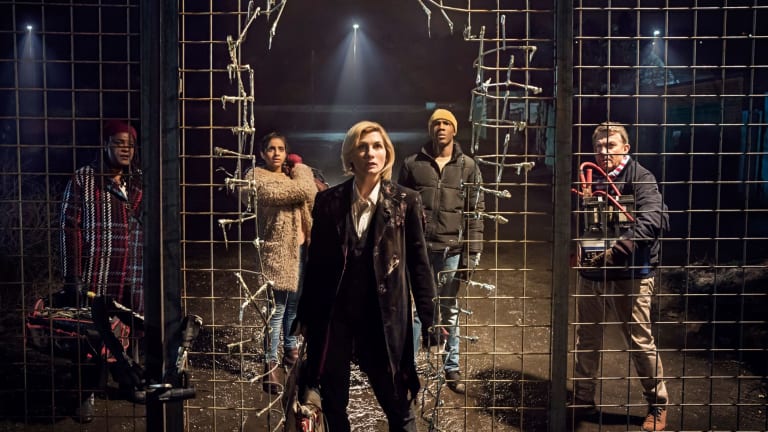 Jodie Whittaker (front) stars as The Doctor in the rebooted Doctor Who.

Doctor Who screens on ABC on Monday nights at 5.55pm and on iview.