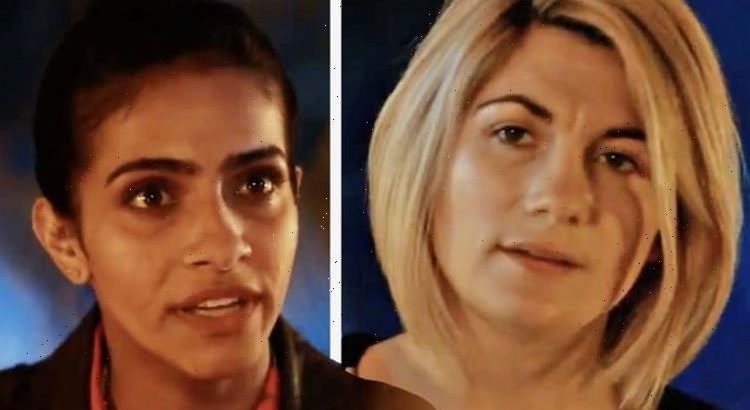 Doctor Who is back sometime this year and Jodie Whittaker’s character returns for her “biggest adventure”. After months of Whovians begging the BBC for details about the new season, a trailer has been dropped which shows The Doctor and her companions back in action. However, during one short moment, PC Yasmin Khan (Mandip Gill) is seen asking the time-travelling figure what she is hiding. Could Yaz be feeling a regeneration is about to happen thus coinciding with the rumours Jodie is going to be leaving the show?

The 43-second teaser kicks off with a scene that returns after the titles have tolled.

“Get inside!” Jodie’s Doctor is telling her companions and newcomer Grey Worm (Jacob Anderson) exclaimed: “Whoa.”

The title then reads: “The Doctor returns for her biggest adventure yet.”

It then moves onto the team presumably meeting new people as the lead character explains: “I’m the Doctor, this is Yaz, this is Dan.”

Someone then falls through the ceiling and onto the floor and Yaz comments: “Hiya.”

Before switching to a scene where she confronts The Doctor: “You’re hiding something,” the companion says.

As for the regeneration process, Whovians know each Doctor has the biological ability to undergo a transformation into a new physical form and somewhat a different personality after instances that would normally result in death.

Regeneration has been used 12 times throughout the history of the show as a device to introduce a new actor for the lead role.