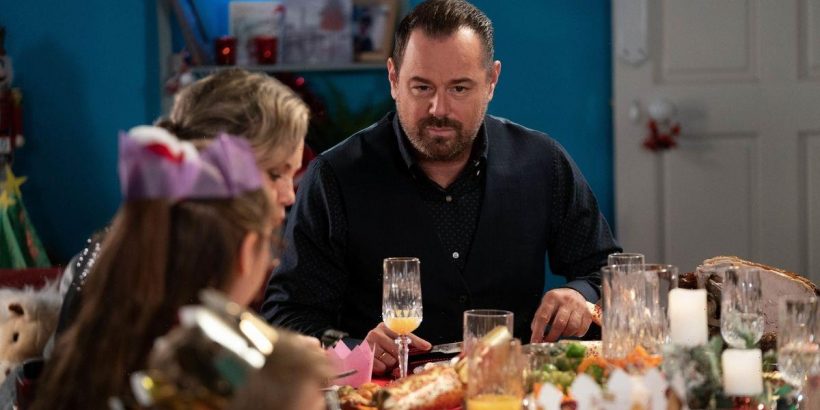 Eastenders fans were left in tears on Sunday night, as they bid a final farewell to Danny Dyer ’s character Mick Carter, as the nail biting conclusion of his storyline with Janine Butcher (played by Charlie Brooks) came to a watery end.

The character was killed off in true soap style as part of this year’s Christmas Day episode, when he tried to save his ex-wife Linda (played by Kellie Bright), after she and Janine drove off a cliff and into the English Channel.

Diving into the water to save the love of his life, fans couldn’t hold back the tears as he swam out into the sea, only to be lost to the dark waves.

The heroic act came after Janine’s treachery was finally revealed earlier in the episode, and the truth that she had framed Linda for a devastating car accident finally came to light.

The exciting storyline all came to a head, as Janine tried to escape her husband and his ex-wife who were determined to bring her to justice for her crimes, hopping into a car to drive to Dover.

However, not willing to let her get away so easily, Linda jumped into the passenger seat and wrestled with her love rival over the steering wheel, causing them to lose control and drive off the side of a cliff and plummet into the English Channel below.

Watching the horrific scene unfold before his eyes, Mick bravely leapt into the water to try and rescue the pair, who were trapped within Janine’s car.

Rescuing Janine first as Mick believed her to be pregnant and taking her back to dry land, he then went back for Linda, yet unbeknownst to him, she had already safely escaped on her own.

In his final scenes, a struggling Mick could be seen battling against the waves, before vanishing completely and ending his nine long years on the show.

Within minutes of the scenes airing, fans raced to social media to share their thoughts, with many left in tears at the loss of an East End staple.

“That ending was the best I’ve ever seen on Christmas Day. Pure emotions! Thank you Danny Dyer for being a legend in Eastenders. The soap won’t be the same,” gushed one emotional fan.

Another also agreed as they wrote: “OMFG what a phenomenal episode!! Huge well done to Kellie, Charlie, Danny and Linda.”

They then continued: “Incredible acting Mick could have survived because it didn’t show his body thank god. I literally cried so much! Mick and Linda forever you deserve so many awards Eastenders.”

While a third viewer weighed in by adding: “BBC One. It was everything we expected from the BBC soap and so much more. Brilliant. Edgy. Shocking. Surprising. And quite the exit for Danny Dyer. Watched the ending five times.”

Many fans were also left speculating about whether Danny would one day return, as they had yet to see a body on screen.

One fan said: “Danny left the show but they didn’t show us the body so I think it’s an open ending still (that’s if they don’t show it soon) & I reckon in a few years he might want to come back.”

Another also agreed, as they suggested his exit had come “Too soon.”

They wrote: “Also I low-key think Mick has survived and we won’t find out until/if Danny Dyer decides to come back. Lastly, years later and I still haven’t got over Ronnie and Roxy dying together smh.”

Despite the widespread praise of the episode, not everyone was quite so impressed, with one fan even dubbing the storyline “anticlimactic” after so much build up.

They said: “Danny Dyer's exit was announced months and months ago.We had so much build up. So much drama. So many theories about his exit. And that is how he exits? A disappointment to say the least!”