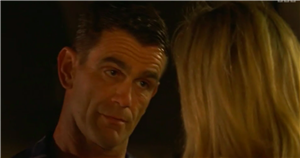 EastEnders viewers believed they have ‘worked out’ who took the mystery video of Sam and Jack kissing after the two drunkenly exchanged a smooch at the end of tonight’s episode.

Jack had been drowning his sorrows after a series of drama with his daughter Amy, who he believed had slept with Denzel.

After he got into a physical altercation with the 14-year-old and slammed him against the wall, Amy sought revenge and called the police station, putting his job as a police officer at risk.

As he spilled out of a bar with Sam, she was seen planting a kiss on him before he pulled away.

Unfortunately, someone was filming the pair, and now fans believe they’ve figured out who it is.

One fan guessed: “So I'm guessing that was Amy or Denzel!*!” another shared a similarly theory that it was his daughter Amy or her boyfriend Denzel.

“Who caught the kissing cheating ones on camera? Maybe Denzel (or Amy).”

A third agreed: “def Denzel or Amy getting their revenge on Jack!”

Denise, Howie and Kim were previously seen trying to calm Jack down as held Denzel against the wall while Amy insisted they had not slept together.

Denise does all she can to calm the situation but Jack puts harsh punishments in place for Amy by grounding her and taking away her phone.

As Denise worked to calm him down, he gets a call from his boss saying he’s been reported for assaulting Denzel and will be investigated.

Jack accuses Howie and Kim of making the complaint before being heartbroken to discover that Amy reported him.

Jack then left to visit a boozer and bumped into Sam before their kissing saga began.

Elsewhere in the episode, Nina rushes to Nish’s side after he collapses and arrives to find Ash tending to Nish who has an infected cut.

She later ends up alone with her dad and he confesses that he knows she was in a relationship with another woman.

Shocked, she seemed relieved to hear that he just “wants her to be happy.”

Meanwhile, Kheerat fumes after the run-in with Nish and his day gets worse when he realises Stacey knew about Suki and Eve and also about his father.

Feeling betrayed, Kheerat leaves and is despondent to find Nish has now also won Ash round.

EastEnders airs Monday to Thursday on BBC One at 7.30pm