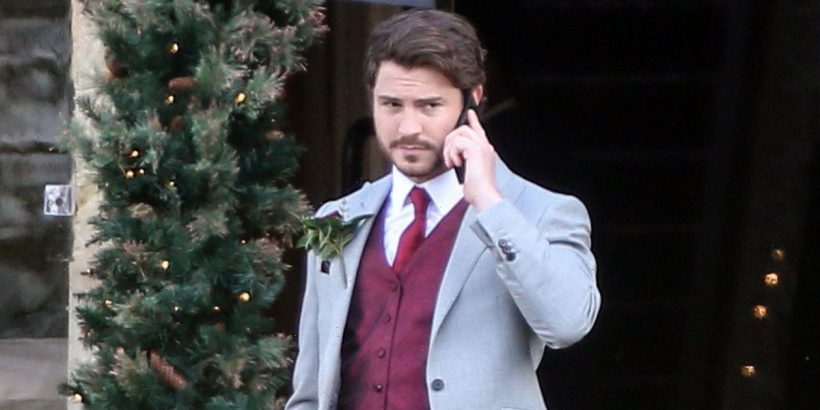 New photos from the set of EastEnders show villainous Albert Square resident Gray Atkins being stood up at the altar, in a plot that could possibly reveal his serial killer past.

The pictures show Gray Atkins, played by Toby-Alexander Smith, looking stylish in a grey suit and red waistcoat, ahead of his winter wedding.

With Gray making a move on Whitney this week in EastEnders, could it be that he pops the question to her later in the year?

And if he does, is she the one who stands him up at the alter? Or is another Albert Square resident in Gray's sights?

It is one of two weddings to air this festive season, with Jack preparing to marry Denise Fox as part of the Christmas double wedding storyline.

However, further pictures show Gray desperately trying to call the bride after she doesn't turn up at the church.

When he can't get hold of her, Gray storms out of the church and he's seen talking to Kheerat.

However, Kheerat is taken back by Gray's furious temper, and after he leaves in a taxi, Kheerat begins to suspect Gray.

The latest photos from the set show what are reported to be some of Gray's last scenes in the soap, prompting thoughts that his serial killer past could have finally been revealed and that it could be the end of his time on Albert Square.

Photos show a huge turnout for both weddings with viewer favourite characters from Albert Square, including Karen Taylor and Denise's sister Kim Fox.

The Albert Square residents are dressed up to the nines for the special occasions, including Karen Taylor in a floral mini dress and faux fur grey gilet, and Kim Fox in a pink and silver stripe dress with a pink jacket.

While it looks set to end badly for Gray, Jack and Denise look excited for their big day in photos outside the wedding venue.

Jack Branning, played by Scott Maslen, can be seen in the photos outside the church wearing a long winter suit jacket.

And why has Gray been stood up at the altar?

Viewers will know that Gray has a dark past, having abused wife Chantelle Atkins before her tragic death in the soap last year.

Since then he has also gone on to kill Tina Carter after she discovered the truth behind Chantelle's death, and Kush Kazemi, who was planning to leave the Square with Whitney, who could potentially be Gray's latest victim.

Could this be the storyline that reveals his awful crimes?

Senior Executive Producer Kate Oates previously told press earlier in the year that "Gray hasn't been as clever as he thinks. Smoking guns are all over the Square, just waiting to be found.