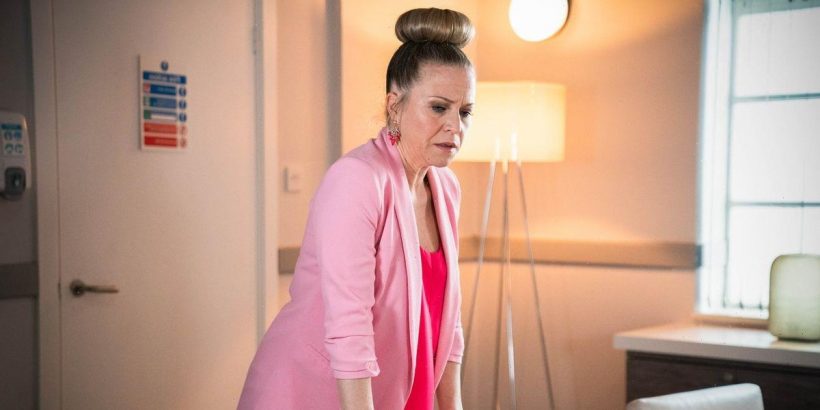 The Queen Vic landlady makes the shock discovery after an explosive argument with her daughter Nancy (Maddy Hill).

Awkward Mick (Danny Dyer) tries his best to diffuse the situation between the pair and play happy families.

Frankie spots Nancy going to the doctor and shares the news with a concerned Mick and Linda.

Mick later warns Linda that she's only making things worse but he eventually gets Nancy to cut Linda and Frankie some slack.

Taking matters into her own hands, Linda makes a call pretending to be Nancy.

At the clinic, Linda speaks to Nancy's doctor but she suddenly feels faint.

The doctor agrees to check her out but Linda is forced to admit that she thinks she's pregnant.

Back at The Vic, Nancy is fuming with Linda's meddling and things get nasty between the mother and daughter.

Will Linda tell Mick and the rest of the Carers about her pregnancy scare?

Fans of the BBC One soap will know that Mick and Linda separated for a short while and she began an affair with Max Branning (Jake Wood).

She even considered moving away to New Zealand with the businessman but she changed her mind at the eleventh hour.

Max is no longer living in Albert Square so will Mick consider raising the unborn child if its not his?

Viewer have already spotted that the character has been having cravings and hot flushes.

One fan wrote: "I think it's just the menopause, either that or she is up the duff again."

A second posted: "She thinks she’s going through menopause but will discover she is pregnant.

While a third person predicted: "Find out she’s quite far gone. The baby is Max’s as her and Mick weren’t sleeping together at that point so there is no way it can be Mick's."

Another said: "Yes I agree that the reason for Linda’s 'hot flush' is that she thinks it’s menopause but it probably isn’t."

Actress Kellie Bright, who has played Linda since 2013, will be leaving the soap following the announcement that she's expecting her third child.

The TV personality underwent IVF from a frozen embryo to conceive her third child.

Kellie, 44, and her husband Paul Stoker already have two sons Freddie and Gene.

Speaking to OK! magazine, she said: "I want to be open and honest about this, because I think it's important for younger women to understand.

"It's important for women to know that, yes, you can have children in your forties and, yes, you can be lucky and do it naturally.

"But for a lot of us it doesn't work that way, so I wouldn't suggest leaving it late by choice."

EastEnders airs Mondays, Tuesdays, Thursdays and Fridays on BBC One