EastEnders‘ Linda Carter faces some tough questions tonight (November 9) as her family confront her over what’s going on with Stuart Highway.

Linda (Kellie Bright) has seemingly turned against Mick since he was sent to jail over the shooting of Stuart – ultimately deciding to block all contact from him.

Although viewers know that Stuart shot himself in order to frame Mick, Linda has found herself suddenly doubting her husband and befriending the family’s enemy instead. 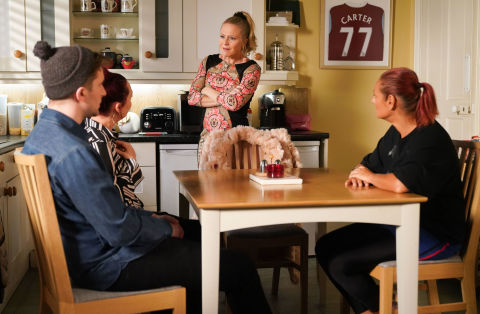 Having removed her wedding rings, scenes airing earlier this week have seen Linda make even more shock moves, as she’s started having secret meetings with Stuart behind her family’s back.

Last night’s episode saw a horrified Linda’s secret rumbled when Tina followed her to a cafe, and she’ll waste no time in interrupting the pair’s cosy meeting in Friday’s scenes.

After lashing out at Stuart, Tina then relays her discovery to an equally shocked Halfway and Whitney.

Backed into a corner, Linda is forced to explain herself after being confronted by her angry family, but what does she have to say for herself? And how will they react?

EastEnders airs these scenes tonight at 8pm on BBC One.