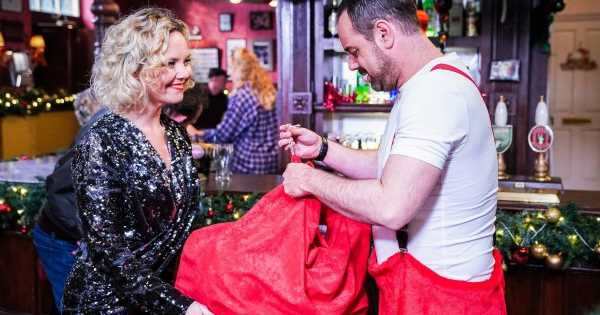 At the Vic, the pair discuss their upcoming festive event – Best Sprout In The 'Ouse.

A flirtatious Janine is helping Mick as a wary Nancy (Maddy Hill) and Shirley Carter (Linda Carter) watch on.

As Best Spouse in The ‘Ouse gets under way, Janine messes with the questions for Stacey Salter (Lacey Turner) and they go head to head.

Even more worrying is the fact Mick doesn’t have presents for the kids at his Christmas event. Mick says he could kiss her and Janine clearly wishes he would.

Later in the week, Janine is provocatively dressed up as Santa’s Little Helper but fails to get Mick’s attention much to Nancy’s amusement.

Billy arrives with the presents for the kids but as they begin to open them, Mick and Janine quickly realise they’re terrible.

Scarlett and Kat give Janine a gift and tell her Scarlett will be spending Christmas with the Slaters, leaving Janine hurt.

She opens up to him about her sadness at not seeing Scarlett and Mick encourages her to do something about it.

Mick later invites Janine downstairs for a friendly drink butt Janine places herself under the mistletoe and kiss Mick.

Janine reveals to Billy that she kissed Mick the following day and that she needs to get rid of Nancy.

Trying to get Mick to herself, Janine schemes and convinces Zack that Nancy still likes him and he should ask her out.

Shirley complains to Mick that no one is helping downstairs as Janine’s gone AWOL.

Once Shirley leaves, Mick heads into the bedroom and is shocked at what he finds.

Fans will have to wait if Mick remains loyal to Linda or will he embark on a steamy affair with Janine.

EastEnders continues Monday on BBC One