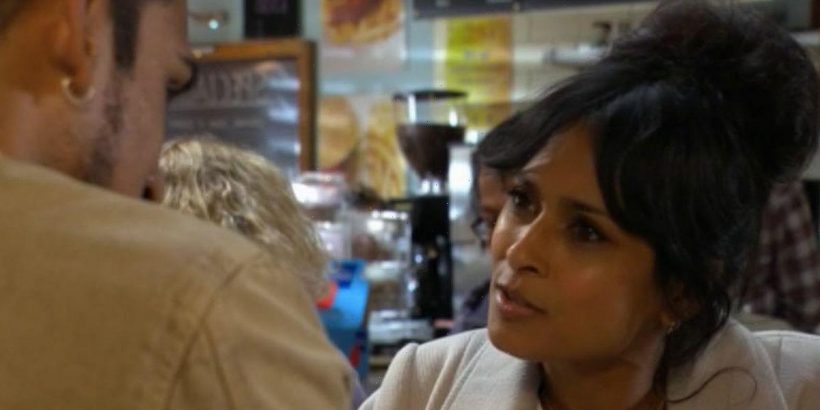 EastEnders fans were left feeling hot under the collar after sexy GP Nina was seen offering up a romp with Ravi.

The stunning brunette was having an intimate chat with Ravi after she spotted him chatting to Nugget following the revelation that Ravi is Nish’s son.

As Nina steps in concerned that his priorities lie with Nish and not her, she made a generous bid to win him over and takes him to the GP surgery for a sex session.

“Nina is a GP on the NHS and has no patients? What fantasy land is this? rimping in the middle of the day # EastEnders.”

After a steamy romp, the pair were interrupted by the police who has further questions about Ranveer’s death.

With DS Manners seeing discrepancies with their original statements, Nina plants the seed that Suki was responsible for Ranveer’s murder and admits she and Ravi were together on the night he was killed.

Suki and Kheerat arrived home to find Nish preparing a meal and wanting to put her family first, Suki fetched Nugget to join them.

Suki decided to stand by Nish but their family’s happiness is short-lived when the police arrive and arrest Suki for murdering Ranveer.

Elsewhere in the episode, Callum encouraged Ben to tell Lexi the truth about Lola’s prognosis but Ben was more concerned with doing research and finding her treatment options.

At the hospital, everyone rallied round Lola and Callum suggested Ben moves back in with him to help support Lexi as Lola is touched by the support.

Linda let slip to Shirley about Janine and Mick’s engagement leaving her furious at the news.

Linda picked up that all is not well with Mick and checked in on him, giving him advice on his future with Janine.

Later on, Mick proposed properly to Janine and allowed Scarlett to call him dad.