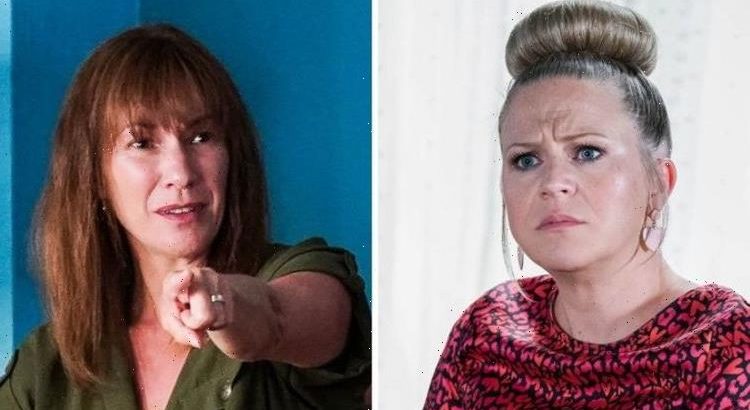 EastEnders Linda Carter (played by Kellie Bright) recently had an affair with Max Branning (Jake Wood) and soon found out she was pregnant with his baby. Deciding to keep him in the dark about her pregnancy, Linda and her husband Mick (Danny Dyer) tried to put the past behind them. However, a desperate Rainie Highway (Tanya Franks) might put Linda and her family at risk by exposing their dark secret.

Rainie and husband Stuart Highway (Ricky Champ) have been desperate for a child and have recently been involved in a surrogacy storyline.

They agreed to let Bernadette Taylor (Clair Norris) be their surrogate but wanted to get a firm option if anything happened.

However, it was soon revealed that Max had run off with his granddaughter without telling any of the family, leaving Rainie heartbroken.

Meanwhile, Mick and Linda have been keeping her affair with Max and the fact she is having his baby a secret.

Linda embarked on the affair with Max after constantly being rejected by Mick, who was struggling with a historic child abuse secret.

When Mick finally opened up to Linda, she chose to stay with her husband and send Max packing whilst keeping her pregnancy a secret.

In upcoming scenes, Stuart and Rainie clash over her obsession to find Max after the revelation he has run off with her adoptive daughter.

Linda tries to comfort Rainie, but she soon comes to regret her decision as she worries she will find out her secret – Max is the father.

Vi mentions to Linda that she looks much bigger than she should for how far along she is which prompts the expectant mother to laugh it off.

Rainie, however, soon begins putting two and two together.

Wanting to get answers, Rainie pops round to see Linda for a cup of tea and soon spots her hospital bag in the corner.

Whilst Linda is out of the room, Rainie starts to root through her bag, trying to find anything that will give her the answer’s looking for.

Later in the week, The Vic is dressed for Pride, and Linda texts Rainie to check in on her.

Worried she might start to ask questions, Mick tries to reassure his other half as he tells her that if she were suspicious, they’d know about it.

However, it all kicks off when Jack Branning (Scott Maslen) arrives in The Vic and demands to know the truth about Linda’s baby.

With Rainie desperate to bring up little Abi herself, will she expose Linda’s baby bombshell secret to bring Max back to the square?

Or could there be a more sinister plan to take Linda and Mick’s baby at play?

Speaking to the Sun and other media, the soaps executive producer Jon Sen teased: “Linda is pregnant with Max’s baby, and they’re desperate to hide that from the Square.

“But Rainie, as ever, is intent on finding out the truth and will Carters be able to convince everyone that Mick is the father in time?”