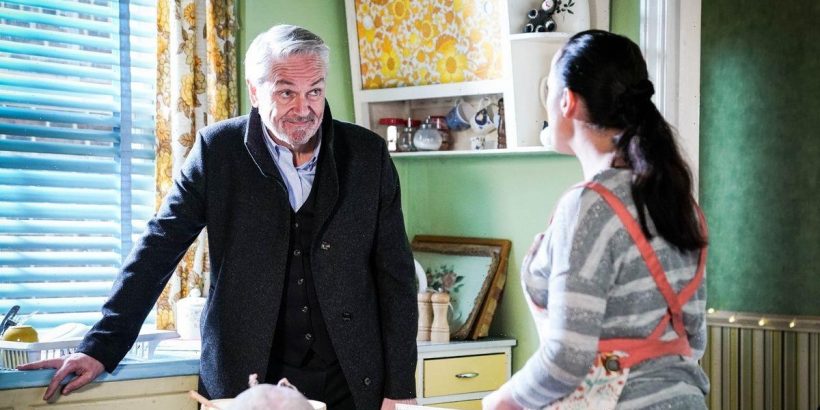 EastEnders bad boy Rocky has finally been exposed as evil Tom Cotton as his niece Dotty got the ultimate revenge.

The scheming teenager announced Rocky's true identity in the middle of Christmas dinner in dramatic scenes.

Earlier in the week, Dotty asked Rocky if he saw her mum Sandy but he lied and says he didn’t.

Peter later revealed to Kathy that he saw Rocky buying drug. After confronting him, Rocky denied meeting a dealer

Rocky got stuck between a rock and a hard place as both Sonia Fowler (Natalie Cassidy) and Kathy Beale (Gillian Taylforth) assumed he'd be spending Christmas with them but he quickly hatched a plan.

Dotty was despondent and Rocky snapped at her with some offensive words about her mum.

Sonia’s oven broke on Christmas Eve and Rocky proposed going to Kathy’s but Dotty was determined to ruin Rocky’s plan and suggested they called Stuart around to fix it.

As Stuart arrived, Dotty confronted Rocky about what he said about her mum and he admitted she’s like a daughter to him.

Stuart later announced the oven was just switched off at the wall but as he leaves, he hands Sonia a note he found with her name on it.

Realising it was the letter he wrote confirming his real identity, Rocky froze as Sonia was about opens it.

Dotty created a diversion as Rocky quickly swiped the letter.

As they headed over to Kathy’s, Rocky’s heart dropped as Dotty's mum Sandy pulled up in a cab.

Rocky told Kathy not to invite Sandy round for dinner, but she insists it’s the right thing to do at Christmas.

Sandy enjoyed teasing Rocky and the power she had over him.

He tried to appeal to Sandy but she blackmailed him.

Rocky revealed that he was the one that found her in the park, Dotty overheard and was left furious.

As Rocky proposed a toast around the Christmas table to family, Dotty watched him with daggers and decided she couldn't deal with his lies anymore.

She told everyone that Rocky is Tom Cotton and explained everything to a gutted Sonia.

Dotty later returns home but a furious Sonia threw her out of the house.

She wen to find her mum who doesn’t offer her any comfort and dropped her own bombshell.