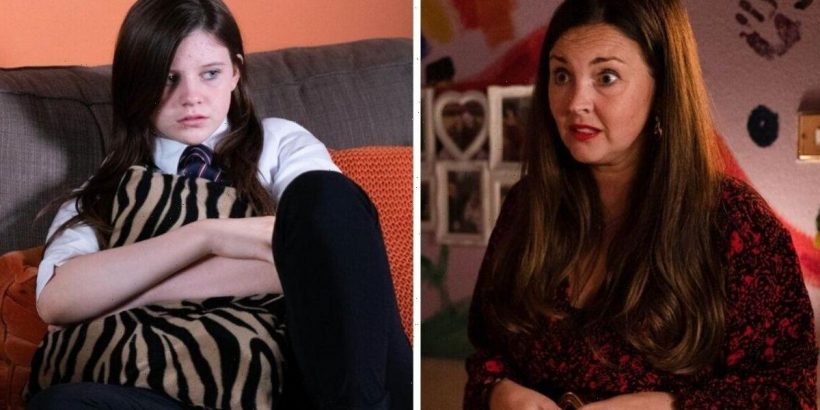 EastEnders: Janine is taken away in police car after arrest

Sunday’s EastEnders saw disaster strike at the Slater household during the New Year’s Eve party as a carbon monoxide leak saw guests collapsing and getting ill one by one. However, another shock awaited Stacey (played by Lacey Turner) after doctors later revealed Lily (Lillia Turner) was pregnant. Actress Lacey stated the unexpected plot will see the character “in complete and utter panic” as the BBC soap storyline escalates in the coming days.

Stacey is instantly worried for her daughter as she gets caught up in the chaos and is found unconscious.

Detailing how the plot unfolds, Lacey explained Stacey first noticed something was wrong “when people start dropping like flies around her”.

She continued: “Eve (Unwin, Heather Peace) collapses, and then Jean (Slater, Gillian Wright) goes, and then someone comes in and says Lily’s gone.

“People are just fainting one by one, and after the third person has fainted, I think that’s probably when Stacey thought, ‘Okay, something’s going on here. It can’t just be Eve’s punch.'”

Talking about the moment Stacey realises Lily is in danger, the actress went on: “Lily ends up at the bottom of the stairs, so I think Stacey goes into complete and utter panic.

“It’s at this point where she thinks, ‘What the hell is going on here?’”

Later at the hospital, Stacey is informed by doctors that Lily is in fact pregnant.

“They’re talking about her twelve-year-old daughter, who doesn’t have a boyfriend, and as far as Stacey knows, isn’t really that into boys.

“Initially, Stacey thinks that the doctors must be wrong.

“After that, she goes through every single emotion that you could possibly feel in such a short space of time.”

The shocked mother later had to explain to Lily that she’s pregnant.

Lacey detailed how difficult the scene was, stating: “I found it really hard to say the lines because Lillia is so brilliant that you can’t help but feel like it’s real when you are filming it.

“Stacey has got her head around the fact Lily is pregnant at this point, but has not thought much more than that.

“She wants to try to stay calm and not make a big deal for Lily’s sake until it sinks in for her.

“When Lillia and I were saying the lines, it was so hard to get the words out of my mouth because I’d gone into the moment and felt like Stacey talking to Lily.”

The actress went on to tease how Martin Fowler (James Bye) might find out about Lily’s pregnancy.

“She needs to find out from Lily how this happened, who the father is, and all the details.

“But to do that, she needs to build trust with Lily, and if her daughter wants it to be a secret, then Stacey will keep it secret.

“That’s why she doesn’t confide in Martin because she’s just trying to get the information and build that trust and not break it.”

Thankfully, her mum Jean discovers the truth and Stacey is able to turn to her for advice.

“Jean is Stacey’s rock, her best friend, and they have such a strong connection,” the actress added.

“Stacey and Jean have been through so much together, and Jean’s the only person who can really properly understand Stacey inside and out.

“For Stacey to share this secret with her mum is a massive weight off of her shoulders, but she also wants someone to tell her what she should do.

“In Stacey’s head, she’s thinking, ‘Do I just go with what Lily wants? Should I be angry? Should I tell Lily she can’t keep the baby?’

“Stacey is just looking to Jean for some help. She wants someone to tell her, ‘Stacey, this is what you do.’”

EastEnders continues on Monday at 7.30pm on BBC One.