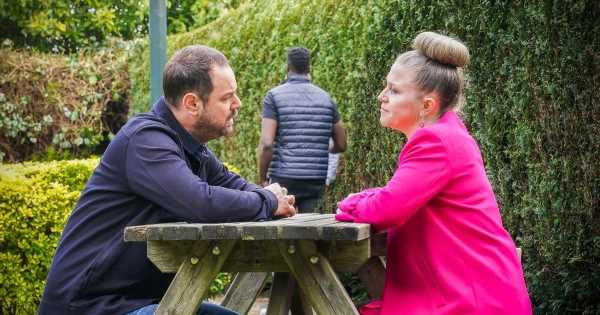 Mick and Linda Carter first arrived in Walford back in 2013 and quickly became fan favourites.

However, viewers will be bidding farewell to Mick over the Christmas holidays following Danny's decision to quit the show.

His exit storyline is being kept secret by bosses for now but what does this mean for his one true love Linda?

She told Daily Star: "I'm staying for the foreseeable future.

"I'm still having a great time there and I've always said I've loved it and I feel quite excited about what the future might bring for Linda.

"It's going to be a brand new chapter for her and I don't know what that looks like.

"She has been with him since they were kids. It's all she's ever known and I think she's going to find it hard.

"She hasn't been with him but he's still been there. Even though they haven't been together towards the end, he's always been around."

Opening up about what fans can expect over the festive season, Kellie teased: "It's explosive. I don't think anyone will be disappointed.

"Across the Christmas episodes, I think people will be happy with what EastEnders have done.

"It incorporates Danny's exit from the show and includes the Mick, Janine, Linda triangle.

"I'm not very good at saying goodbye at the best of time but everything about that job has been me and him so it did feel like the end of an era.

"Danny is so well loved there and there was a lot of care and attention and the scenes had the best team behind it."

Scenes photographed in The Sun show dramatic scenes will see a car go over a clifftop with Danny seen being filmed jumping over the cliff into the waters below.

Kellie was filming as Linda at the scene and was covered in blood. Has Mick dived in to save Linda?

Charlie is also leaving EastEnders so this could be her big exit also.

EastEnders airs Monday to Thursday on BBC One at 7.30pm