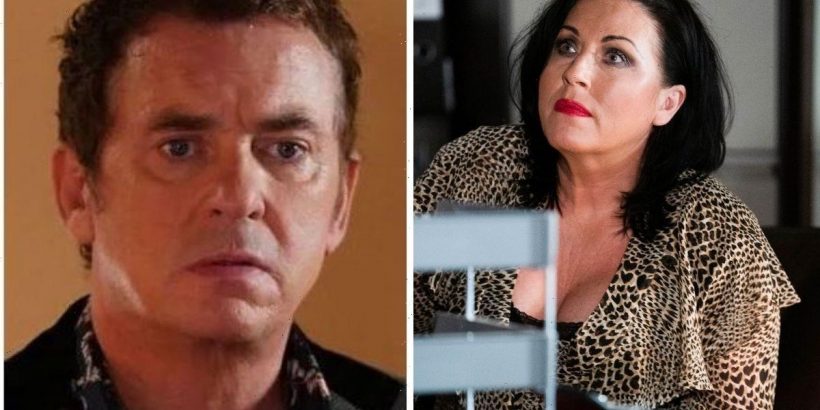 Pictures snapped show Alfie (played by Shane Richie) looking furious as he arrives at the church where his ex-wife Kat (Jessie Wallace) and enemy Phil (Steve McFadden) are set to tie the knot. From the looks of the pictures of the upcoming EastEnders drama, history will repeat itself as Alfie manages to stop, or at least delay, the wedding. But could he drop the bombshell he and Kat are actually still married?

Spoiler pictures from the BBC soap depict the actors filming the explosive episode.

Kat looks shocked as she spots her ex-husband, and they later appear to be having a heart-to-heart in a van.

Snaps also show Phil sitting outside the church looking confused, while another shows Kat in her wedding dress – covered in mud.

It seems Phil is in for an anxious wait as he pauses the ceremony and stands outside with a crowd of guests including son Ben Mitchell (Max Bowden), Sam Mitchell (Kim Medcalf) and Lola Pearce (Danielle Harold). 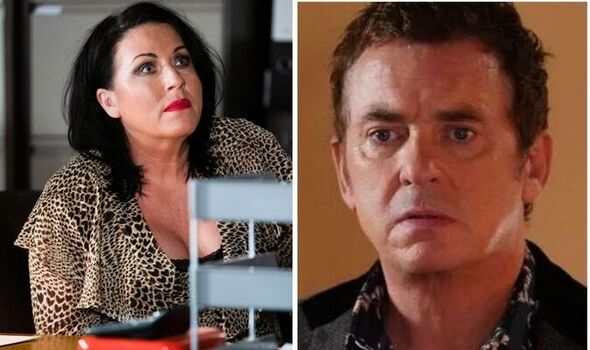 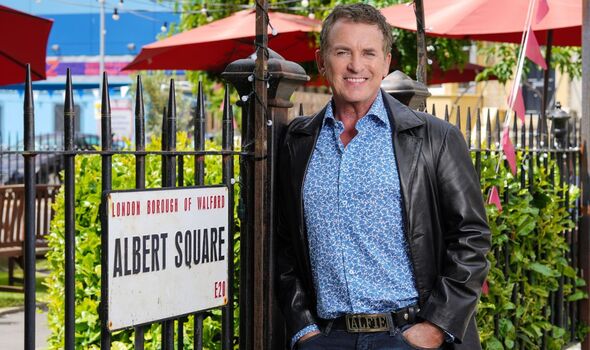 Alfie hasn’t been seen in the soap since early 2019 following the breakdown of his and Kat’s marriage.

The two fell in love when Alfie turned up in Walford in 2002, and throughout their several stints on the soap, they’ve faced huge highs and lows.

It seemed as though things were officially over when Alfie didn’t return after departing three years ago, and Kat moved on with the Square’s gangster, Phil.

It’s unclear what will happen on the wedding day, but it definitely won’t be going according to plan. 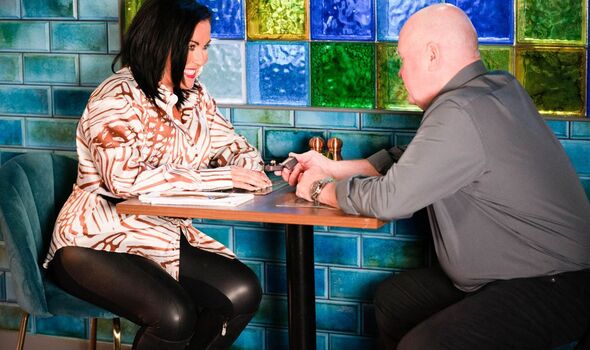 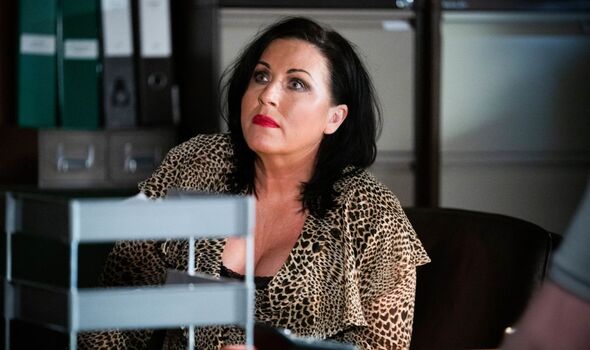 It could be a misunderstanding meant Kat believed she was good to go with her marriage to Phil, but perhaps Alfie hasn’t done his share of admin for the divorce but pretended he had.

Loyal soap fans will remember Alfie has in fact crashed a wedding of Kat’s before, back in 2003.

He declared his love for her as she was set to marry EastEnders bad man Andy Hunter (Michael Higgs).

Things turned out well for him back then, but will history repeat itself or will Kat be determined to stay with Phil?

It’s possible the wedding may not be able to go ahead, but Kat and Phil could remain an item.

An insider confirmed: “Alfie makes a surprise appearance at the wedding and causes chaos.

“After Kat sees him, she jumps in the van even though it’s really dirty.”

Speaking to Daily Star Sunday, they added: “It means her wedding dress gets completely ruined.

“Things get messy in every sense. It looks like Phil will be stood up on his wedding day.”

Phil’s ex Sharon Watts (Letitia Dean) is also in the pictures, at one point seeming to have a chat with Alfie.

Viewers saw weeks ago how Phil and Sharon were set to reunite after she was left devastated when she thought he had been killed in prison.

Could the chaos of the wedding see this shocking news exposed?

It’s possible the two former spouses could team up to break Kat and Phil apart, believing they belong with them.

With the possible news they are still married, and the potential for secrets concerning Phil and Sharon to come out, will the entire thing be called off?

Perhaps during their conversation, Sharon will explain to Alfie how she and Phil shared a kiss just weeks ago, and Alfie, keen to stop the wedding, will tell all to Kat.

With the wedding turning into a disaster, it seems likely Phil and Kat could end up breaking up thanks to their exes.

Will Kat and Alfie reunite, leaving Sharon and Phil free to get back together? Or will a furious Phil be out for revenge?

EastEnders continues on Monday at 7.30pm on BBC One.