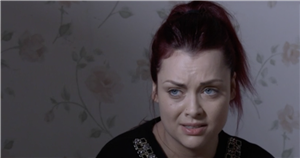 EastEnders viewers couldn't quite believe their eyes during tonight's episode as Walford saw even more drama.

Fans were left furious when Whitney Dean explained to Sonia Fowler that she almost kissed murderer Gray Atkins, admitting she felt as though she had "cheated" on her ex-boyfriend, Kush.

Kush was killed by Gray ahead of his departure, having been pushed in front of a tube going at high speed as it entered Walford Underground.

Following his tragic death, Whitney had grown close to Gray, without knowing he was responsible for his horrific death.

Speaking to Sonia ahead of her performance in a local talent show, Whitney revealed she was feeling anxious but her nerves were not just centred around her gig.

The fiery redhead said: "My head is all over the place," before Sonia added that everybody would feel nervous if they were in Whitney's shoes.

"It ain't just nerves, me and Gray, we nearly kissed, he'd had a really tough day right and I was there for him, it was just a moment," confessed Whitney.

She went on to add: "I just can't stop thinking about it, feeling guilty, like I've cheated on Kush."

Sonia reassured her pal, saying: "I know you miss Kush but you are allowed to move on you know and he'd be so made up, seeing you do something like this, you know he would.

"He'd be in that front row, cheering you on, that's why I think you should do it, do it for Kush."