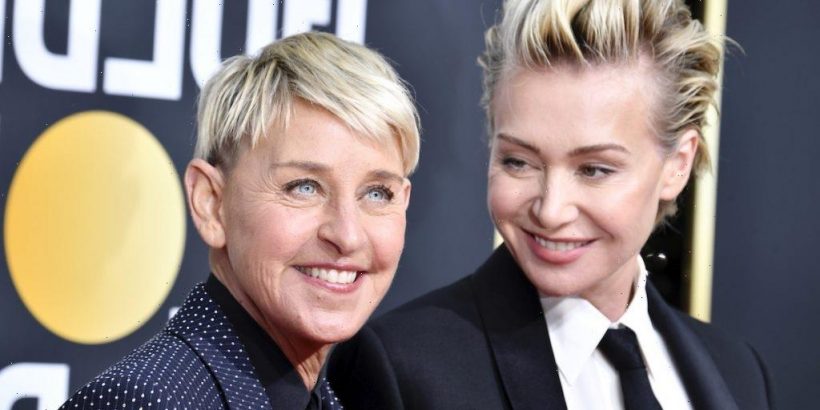 Ellen DeGeneres is back to hosting her own show. She revealed she’s living at Courteney Cox’s home. This is what she had to say about her marriage to Portia de Rossi and those who might think they’re having marital troubles.

The couple recently made headlines because DeGeneres took de Rossi to the emergency room in March. DeGeneres talked about this in her appearance on Jimmy Kimmel Live!

DeGeneres said her wife wasn’t feeling well one night and wanted to go to bed early. So DeGeneres decided to experiment alone.

“Chelsea Handler told me about these weed drinks, they’re called Cann, and they have CBD or [THC] — I don’t know what the good thing is,” DeGeneres said. She drank one, then had three. The talk show host then took a sleep aid.

When she went to bed, de Rossi was on the ground moaning in pain. DeGeneres then had to drive her to the emergency room. She had an appendectomy and is now doing better.

DeGeneres is now staying at Courteney Cox’s home. She joked about this with Cox on May 6’s episode of The Ellen DeGeneres Show.

“The world knows our first guest from a little show called Friends, but currently I just know her as my landlord,” she said when introducing the actor for the episode. Cox corrected her saying she thinks of DeGeneres more as a roommate.

DeGeneres asked how she’s doing as a roommate. Cox said she moved all of her stuff to the right side of the bathroom so the talk show would have space for her things. But her assistant checked the bathroom, and DeGeneres took over the whole room. “So essentially, you’re a terrible roommate,” Cox joked.

DeGeneres claimed it was de Rossi who actually moved her things. “I’m not having marital troubles… I’m not living with Courteney Cox because I’m kicked out of my house,” the host said.

They actually sold their house in Beverly Hills. So they’re staying there until they find a new place.

They sold their home for millions

DeGeneres has been open about her love for real estate. The home they recently sold reportedly went for $47 million, according to Mansion Global.

The couple bought the home in May 2019 and the news of the sale was released in April 2021. The couple did make a profit off the 10,000 square feet mansion since they bought it for $42.5 million.

It sounds like the couple had a dramatic couple of months with trips to the emergency room and moving. But they’re now having fun staying at Cox’s home while they look for a new mansion.