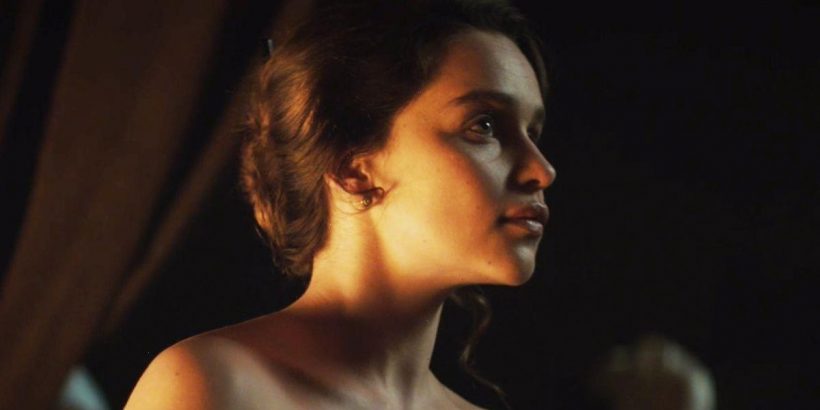 Emilia Clarke is no stranger to a sexy scene, and has starred in many sultry roles in her career.

While she starred on Game of Thrones as Daenerys Targaryen she was often found to be stripping off completely nude and in engaging in some extremely raunchy sex scenes.

She’s also steamed up the screen in a variety of other projects, including indie films like Spike Island and Voice From the Stone and big-budget romance Me Before You.

For her 35th birthday, Daily Star has taken a look back at her hottest scenes both on TV and film and round up the steamiest ones.

In 2012, Emilia took the role of Sally, a young woman who crosses paths with a group of guys obsessed with The Stone Roses in the early 1990s.

Along with the boys, Sally attempts to get into the band’s legendary gig at Spike Island in Cheshire, England and hijinks soon ensue.

While the film was not a hit with movie critics, Emilia’s fans will love the movie for its scene in which she engages in intimacy with lead character Gary Titchfield, played by Shameless star Elliott Tittensor.

Sally can be seen stripping off her dungarees down to her bra to lock lips with Gary in a passionate embrace.

Voice From the Stone

This indie supernatural film stars Emilia as Verena, a child psychologist attempting to help a young boy move past his mother’s death.

She soon realises that she looks just like the boy’s late mum and begins to dream about having sex with his father Klaus.

She agrees to pose nude for him and the scene is cut with shots of her lying in bed pleasuring herself in a scene that is equally bizarre and hot and will have fans wild with desire.

While Daenerys' relationship with Khal Drogo (played by Jason Momoa) begins with marital rape, by the second episode of the show she begins to assert her dominance in the bedroom.

The star climbs on top of her husband demonstrating the moves she’s learned and fundamentally changes her role.

Finally she is able to take the lead and in doing so shifts the power imbalance between the couple and allows them to bond.

There’s nothing sexier than woman with power and Khal Drogo knows it.

Emilia has built a career out of playing assertive women so it came as no surprise to see her take up the mantle of playing the iconic role of Sarah Connor.

Sarah once again find herself the target of Arnold Schwarzenegger’s Terminator and her son and Human Resistance leader John Connor sends his friend Kyle Reese back in time to protect his mother and they engage in a sweet romance.

While the film wasn’t a huge hit with fans, the scene they were most enamoured by was where Sarah strips off to a sexy black bra before preparing to travel through time to the year 2017.

Along with getting to see Emilia kick some major butt, it’s no wonder this film rates as one of her sexiest.

The final of the first season of Game of Thrones ends with Daenerys setting herself on fire along with her dragon eggs.

The flames burn everything around her but leave her unscathed and she stands completely nude and covered in ash surrounded by her three dragons.

While the scene isn’t sexual in nature, it’s impossible to look away as hundreds of Dothraki kneel before a woman fully owning her nakedness, and is a favourite for fans.

Emilia plays Lou in this tear-jerker of a film, based on the novel by the same name.

The film follows a London banker named Will who is paralysed from the neck down after he’s involved in an accident.

His mother hires Lou as a companion for her son and the two soon fall in love.

With its PG-13 rating, Me Before You gives even the most buttoned-up a chance to experience Emilia’s sexy charm.

One memorable scene is when Lou dresses up to go to a concert with Will in which she stuns in a gorgeous red gown with a low neckline, that is sure to be a hit with her fans.

Emilia’s role in Star Wars isn’t quite as steamy as that of Game of Thrones, but it does provide a new dose of sexual tension for the franchise.

Emilia plays Han Solo’s lover Qi’ra who reunites with the hero to plan a coaxial heist together and even share a kiss or two.

Fans will adore this one for her incredible costumes, including one plunging black dress with a gold decorative detail that hugs her curves and means viewers and Han Solo are unable to take their eyes off her.

In the finale of Season 7 of Game of Thrones, after dropping many cues of a potential relationship, Jon Snow and Daenerys finally sleep together.

However, the pair are unaware that Dany is in fact Jon’s aunt, as Bran reveals in a voice over.

While the scene is inescapably incestuous, viewers went crazy for it and especially the sight of a naked Emilia and Kit Harington.

Controversial it may be, but it remains undoubtedly one of Emilia’s sexiest scenes on the show.