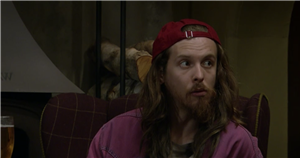 Emmerdale fans were left baffled on Thursday evening, as Ryan Stocks was 'replaced' by another character entirely.

Ryan was chatting to Matty in the café about shifting some dodgy perfumes when his mum Charity walked in and disrupted the discussion.

But, as Ryan hatched a plan to get rid of the colognes and get Mackenzie off his back at the same time, viewers were sure they'd spotted something strange within the scenes.

They theorised Ryan had undergone a complete 'personality transplant' after living with Mack and becoming embroiled in his dodgy schemes.

Taking to Twitter, an army of eagle-eyed fans were set to point out the inaccuracies, as one wrote: "So Ryan's a gangster now, yeah okay!"

Someone else penned: "I hate what they're turning Ryan into!", while a third fan moaned: "Not liking the direction the producers are taking Ryan in… #Emmerdale."

Another fan warned: "You shouldn't have got started in the first place Ryan!"

"Ryan you obviously can't handle it!" someone else said, as Ryan displayed his fear at finally being confronted with the potential of legal action.

Later, Charity tied Mack up and gagged him before stuffing him in the boot of her car.

When Matty and Ryan arrived, she announced that she'd called the police over the dodgy plot – leading Ryan to fess up to everything and beg her to reconsider.

But Charity later revealed it was all a ruse, once he'd promised to never do anything so bad again.

"I hope I didn't tie you too tight," Charity told Mack.

"I was just trying to help!" she insisted to Ryan, as he told her: "You really scared me!"

There was some more flirty banter between Charity and Mack later on, as he said: "I'm glad you're not my mum."

"As if I'm old enough!" Charity said, clearly affronted, as Mack fired back: "As if you're not!"

Charity mentioned she'd like to smack him, and Mack definitely hinted he wouldn't mind as the pair made eyes at one another.

But their relationship – and subsequent love making – didn't please Ryan, as their bedroom shenanigans were aired to the world, and Ryan ordered his mum out of the house.

Will the pair be able to make amends, or has Charity once again gone a step too far with her kids?