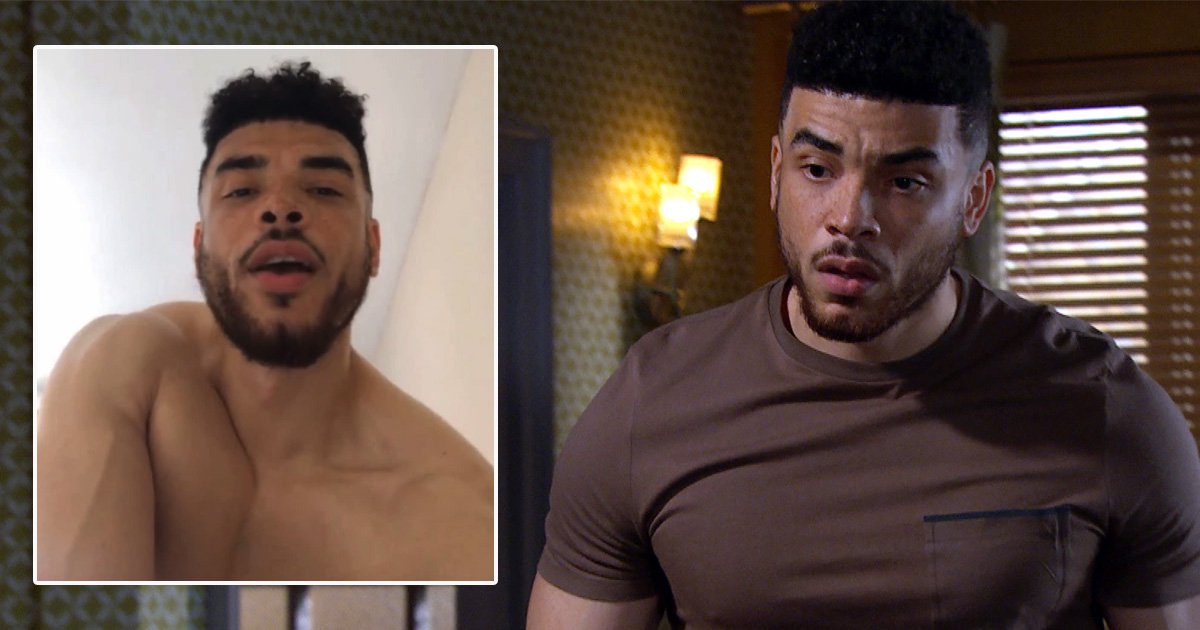 Emmerdale actor Jurell Carter left fans gawping after he posted a seemingly naughty clip on Instagram at the weekend.

The star, who plays farmer Nate Robinson on the ITV soap, looked as if he may have been performing an explicit act on himself in a short video.

His Instagram Story showed his naked upper torso with his toned arms and shoulders on display.

He could be seen looking straight into the camera with his mouth slightly open as he had a wistful look on his face.

Jurell appeared to be bobbing up and down and he captioned the film: ‘Physically I’m sweating on a dull day in Yorkshire.

‘Mentally I’m in Jamaica on the beach sippin couple cocktails… we move.’

His shocked fans bombarded him with questions in a bid to find out what he was up to.

Posting some laughing emojis later on, he wrote: ‘Let a man live. I was on my spin bike.’

The ITV hunk then deleted both posts but his fans had already kept screenshots as souvenirs.

One person remarked: ‘It looked like he had posted his own sex tape by mistake.

‘Disappointed to realise he was just riding his bike.’

Jurell hit the headlines last month after he linked to an account on Instagram that shares conspiracy theory posts regarding satanism in Hollywood and the coronavirus pandemic.

He also spoke out earlier this year with his controversial views on the coronavirus vaccine, describing it as ‘experimental’ and saying that people are being ‘demonised’ for not wanting it.

Last month, Jurell shared several posts on his Instagram Story, one of which linked to an account that has made outlandish claims about satanic practices among celebrities in Hollywood and spread dangerous falsehoods about the Covid-19 pandemic.

Another post shared on his Story prompted an Instagram user to send him a direct message calling him an ‘anti-vaxxer’.

Sharing a screenshot of the DM on his Story, the actor wrote: ‘Again with the anti vaxing labels [sic],’ alongside a snoring emoji, before adding: ‘Also trolls stop hiding behind these profiles you clowns.’

On the NHS website it says the Covid-19 vaccine ‘is safe and effective’ and ‘gives you the best protection against coronavirus’.

ITV declined to comment when contacted by Metro.co.uk at the time in regards to Jurell’s remarks.

Got a story? If you’ve got a celebrity story, video or pictures get in touch with the Metro.co.uk entertainment team by emailing us [email protected], calling 020 3615 2145 or by visiting our Submit Stuff page – we’d love to hear from you.