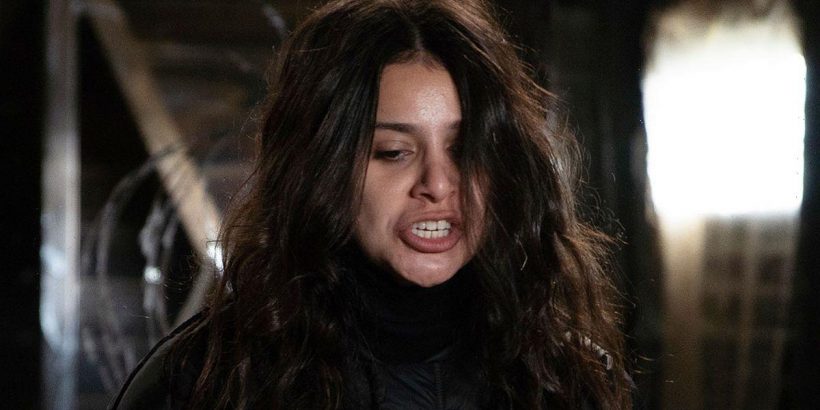 Emmerdale's Meena Jutla might have run away to Glasgow after holding Vinny and Manpreet hostage – but she won't get far until her past crimes catch up to her, at least according to ITV soap fans.

Eagle-eyed viewers are sure they've spotted a key piece of evidence which will finally bring Meena to justice after her killing spree – and it isn't the box of evidence she's buried in Liam's allotment.

Instead, they think Andrea's dog – Princess – could be the key to bringing Meena down.

Since murdering Andrea Tate in the maize maze during the survival week, Meena has been holding onto Princess for safe keeping while Wendy was away, looking after her in the B&B.

But when the police launched a raid on the property this week, fans think them finding Princess could be a vital clue.

If nothing else, the dog might be able to tie Meena further to one of her victims.

Taking to Twitter, one fan theorised: "The police are going to find Andrea's dog that Meena was looking after! Hasn't been seen since before Manpreet was held captive in the barn, and Meena's gone but nobody seems to be caring for the dog!"

Someone else posted: "Wonder what happened to Princess the dog – did Meena kill her?"

As someone else suggested Princess could be even more intrinsic to bringing the villain down, suggesting she could find Meena's box of evidence: "They'll probably have Princess the dog dig it up and drag it into the woods!"

It came as Vinny and Liv shared an emotional visit in prison, after Liv's solicitors informed her new evidence had been found in her case – and she would be up in court the next day.

Viewers haven't yet been clued in on what the evidence might be, but they did get to see police investigating the B&B.

And later, Mandy, Vinny and Lydia were celebrating the news that Liv could soon see freedom after being convicted of Ben's murder – though nothing has been promised yet.

When Chas arrived it looked like nothing could dampen the mood – but she went on to confess that Aaron wasn't coming back for the hearing.

As they discussed potentials – including that Meena could have been caught – worried fans turned to social media with their own doubts, with one writing: "Why do I have an itchy thought that the evidence is a tally or something from Meena implicating Liv more?

"Want my gal free but also know Emmerdale loves to make her miserable!"