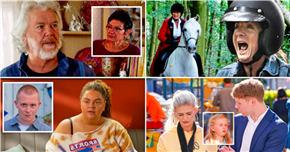 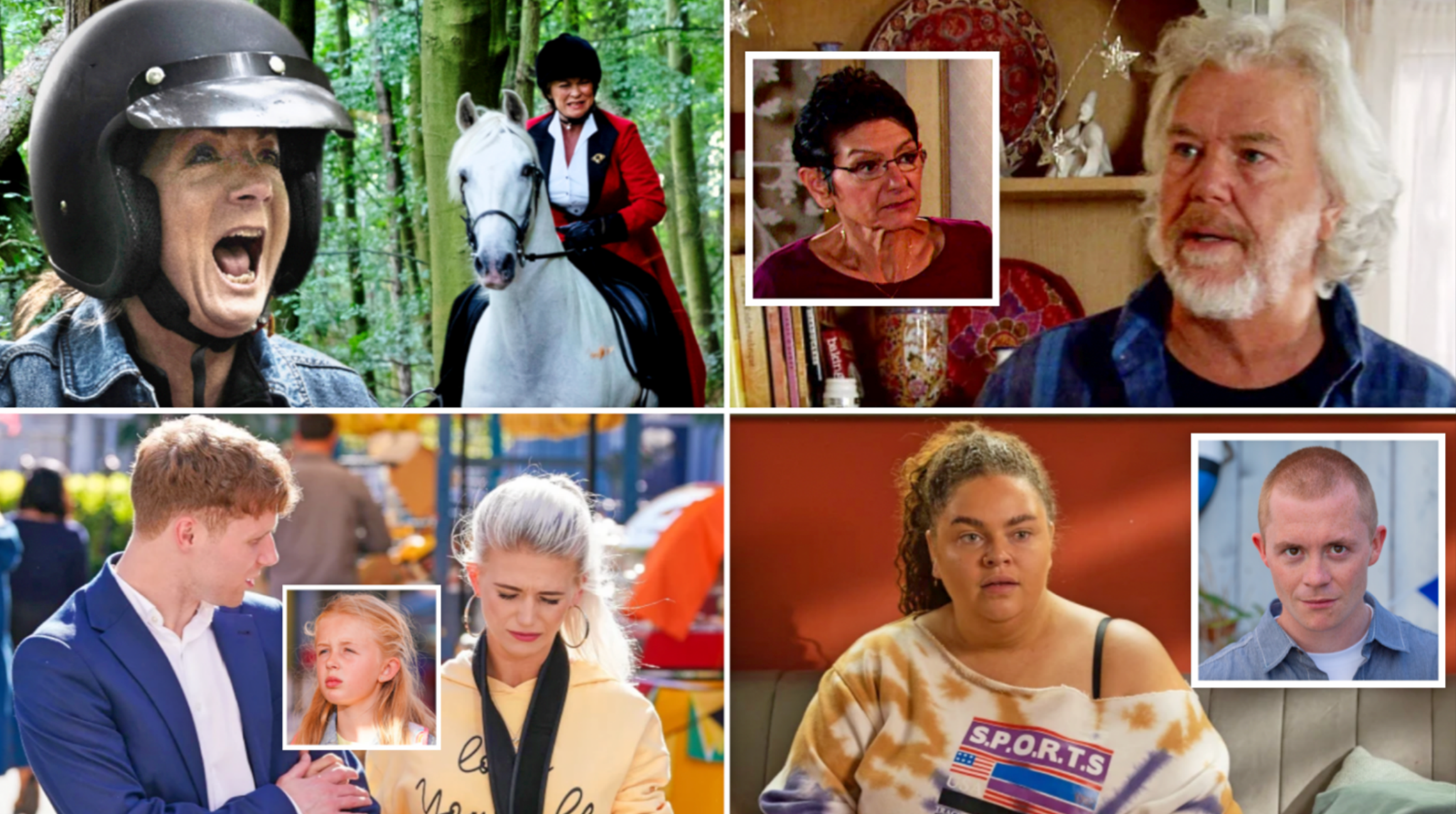 It’s going to be a week to remember in soapland, with shock developments left, right and centre!

Emmerdale marks its 50th anniversary with a huge week of death and destruction as a storm wreaks havoc on the eponymous village, leaving chaos in its wake.

Strap yourselves in, it’s going to be quite a week in the Dales, and we recommend that you don’t miss a moment of all the drama.

Over in EastEnders, Lexi Pearce is on to Lola and Jay Brown’s big secret, while Hollyoaks sees radical misogynist Eric Foster sink to a devastating new low as he spikes Lizzie Chen-Williams’ drink.

Is his time up?

If you can’t wait to find out all there is to know about next week’s soapy shenanigans then Metro.co.uk has lined up just about EVERY big development from next week, so why wait?

1. Leanne visits Harvey in prison, determined to find out why he’s got in touch with her. To her shock, Harvey reveals that Sam has been writing to him, and he asks her to get him to stop. Leanne relays her discovery to Nick, who confronts Sam. Sam wants to know why Harvey killed his mum and agrees to stop writing on the condition that he can go and see Harvey for himself!

2. There’s a big shock in store for Summer, as she discovers that she is pregnant! Chesney finds a positive pregnancy test in a denim jacket that Gemma bought from a clothes swap, but is relieved when Gemma reveals it’s not hers. Paul, however, recognises the jacket as Summer’s and subsequently asks her about it. Summer later confides in Paul, revealing that she and Aaron are back together and thus will make a decision about the baby together.

3. Having found out that Lucy and Bridget have both been charged, Stu masks his anxiety for Eliza’s sake. Alya’s awash with guilt but Dee-Dee assures Alya that she did the right thing. Bridget calls Stu from prison and tells him that she and Lucy have pleaded guilty to murder and she’d like him to take care of Eliza for her. Stu and Yasmeen reel in shock.

4. Fern arrives for her cleaning job at the jewellery shop, but the owner assumes that she is Bernie, and thus leaves her to lock up when she’s finished! Fern robs the shop blind. Fern exits via the back of the shop and after stripping off her Bernie outfit, she surveys her ill-gotten gains with glee – while Bernie faces the music for her doppelgängers crimes!

5. Sally is shocked to discover that Tim bought Aggie a necklace. She subsequently confronts Aggie, explaining how hurt she is that Tim prefers her company, before suggesting that in future she should focus on Ed and leave Tim alone!

6. A despondent Jenny confides in Stephen that she’s not heard a thing from Leo and suspects he’s met someone else in Canada. Stephen feigns sympathy.

7. Daniel suggests to Daisy she should move in with him properly. Daisy confides in Jenny how Daniel’s asked her to move in but she’d rather they found their own place as she doesn’t feel comfortable knowing the flat holds memories of Sinead.

8. Nish is disappointed when Ash and Kheerat fail to show up for a family lunch. Kheerat, meanwhile, reveals to Stacey that his dad killed someone who got too close to Suki. Nish tries to settle himself back into the family businesses but after a run of awkward incidents, he has a confrontation with Kheerat. Alone, Nish collapses on the floor.

9. Kheerat fumes to find out that Nish has won Ash and Vinny around, and when he finds out that Stacey knew about Eve and Suki, he’s left feeling utterly betrayed.

10. Lily learns that Amy plans to sleep with Denzel. Stacey picks-up that Lily is hiding something and after learning what’s going on, she finds Jack. Denzel, meanwhile, arrives at Amy’s and tells her he wants to take things slowly. As the two kiss, a raging Jack storms in and slams Denzel against the wall!

11. Zack spots Martin chatting up his delivery driver, Jenny, and helps him to secure a date by suggesting he joins them with Jenny’s friend, Amber. Sam gets jealous to hear Zack is going out and tells him he has to work.

12. Denise talks to Jack but as Jack starts to calm down, he gets a call from his boss – he’s been reported for assaulting Denzel and will be investigated! Jack throws accusations about who is responsible, and he’s left surprised when Sam offers him support. Sam, however, leans in for a kiss – and someone is recording it!

13. Jay and Lola tell Martin they’re back together but ask him to stay quiet, unaware Lexi is growing suspicious.

14. Kim and Will have it out over the latter’s feelings for Harriet, but Will is insistent that he wants to marry Kim. Kim confronts Harriet, who snaps and grabs her by the throat! The wedding guests, meanwhile, prepare for the ceremony, and Kim soon arrives on horseback – but there is a storm brewing.

15. Amelia is hopeful as she awaits Noah’s arrival for a romantic picnic, but the storm soon picks up, as she’s blown about. Suddenly, her contractions begin – just as her phone battery dies! Amelia finds shelter in a barn, and she prays for the safety of both she and her baby. The residents, having realised she’s missing, commence searching for her – but will they find her before it’s too late?

16. Out in the fields and fighting the dangerous conditions, Harriet flies across the countryside on a quad bike. Kim, meanwhile, is struggling against the elements on her horse when she spots the tyre tracks of Harriet’s quad. She begins to follow Harriet’s path into the woods.

17. A barn at Moira’s farm collapses and the cows escape, panicking in the wind they begin to stampede.

18. Chas is angry at Al, blaming him for her not being there for her mum, while Aaron believes she is truly done with Al. Al speaks to Chas and, realising it’s over, states that if he can’t have her, then he’s leaving town! But is that truly the end of it? Perhaps not, as Chas and Kerry are both injured by flying debris in the storm, and Al is forced to choose between them.

20. The sun rises over Emmerdale in the aftermath of the storm, and the full devastation is revealed.

21. A shocking display of transphobia is uncovered on school premises when cruel flyers appear with Sally’s picture on them. Despite being encouraged by Nancy to find the culprit, Sally insists on rising above it – but just who is to blame?

22. Eric takes some time away from the school before returning, but when Sally yells at him, he retaliates by wrecking the hall, before acquiring a job at The Love Boat. He subsequently spikes one girl’s drink, and it turns out it belongs to Lizzie, who ends up in hospital!

23. Ethan pulls out all the stops to avoid going down for Maya’s murder and even blackmails Sienna into helping him, and soon there are questions of a possible spark between the two. Heartbreaking consequences ensue, however. Just what fate lies ahead for Ethan?

24. Wedding plans are back underway for Prince and Olivia, but as Olivia details her dream wedding in a castle, will Prince be able to meet her expectations?

25. Damon builds a make-shift water fountain out of materials from the emporium. Things take a turn when Faith starts to play with it unsupervised, but a handsome new stranger saves the day.