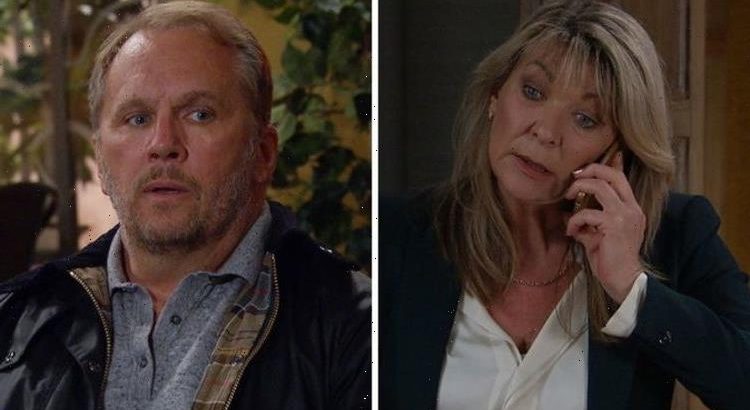 Will (played by Dean Andrews) began to panic when Kim (Claire King) considered allowing part of her land to be used – the exact location where Will buried a body over a year ago. The Emmerdale villager was forced to open up to Kim about what he had done. Ever the manipulator, Kim could see this as a chance to get what she wants out of Will. Will the ITV villain end up exposing him?

She told her lawyer to do “whatever it takes”, to make sure she gets custody, despite Millie currently living with her mum, Andrea Tate (Anna Nightingale).

Kim is obviously willing to play dirty, and she may now have the perfect threat to persuade Will and his daughter Dawn Taylor (Olivia Bromley), who was also involved in the murder, to help with her case.

They wanted to move the base camp to a different area of Kim’s land, and Will was instantly alarmed.

He ordered Kim not to use the land and she demanded to know why he was opposed.

After he suffered a panic attack, the pair sat down and spoke about what was going on.

“I don’t know where to start,” Will told scheming Kim.

“I just wish that day had never happened,” he began.

“What day?” the antagonist asked. Will replied: “I had to do something, I didn’t have a choice, and I’m so sorry.”

“Is this about Jamie?” Kim assumed. “Did you help him do a runner? Answer me!”

“No,” the former criminal responded. “I had to protect her!”

When Kim asked who he was talking about, he revealed it was his daughter, Dawn.

“But this isn’t her fault,” he quickly added to a baffled Kim.

“What have you done?” she asked. Eventually, the former drug dealer explained: “The base camp – I can’ let you go back to the original plan.

“Because I killed someone, and I buried the body there.”

The body is that of DI Mark Malone (Mark Womack), who was killed by Dawn last year.

After making Dawn’s life hell, a confrontation led to a huge showdown, which killed Malone.

Will, Dawn, and Harriet Finch (Katherine Dow Blyton) made a pact to keep it a secret and buried the body.

The trio haven’t mentioned it to anyone else, but now that Kim knows, trouble is bound to start.

She usually has a scheme up her sleeve, and now that she has a hold over Will, it’s likely she will use it to her advantage.

Because Jamie Tate (Alex Lincoln) and Dawn used to date, it’s possible Kim will enlist her help, along with Will, to try to convince authorities that Andrea isn’t a fit mother.

Will wouldn’t normally go through with a plan like this, however, now that Kim can threaten to expose the truth, he might have to.

It’s likely he will do all he can to protect Dawn, as she was the one who killed Malone.

Not revealing this to Kim, Will is probably going to do all he can to keep his daughter’s name out of it.

Will Kim be able to blackmail Will for a long time?

Emmerdale continues on Thursday at 7pm on ITV.