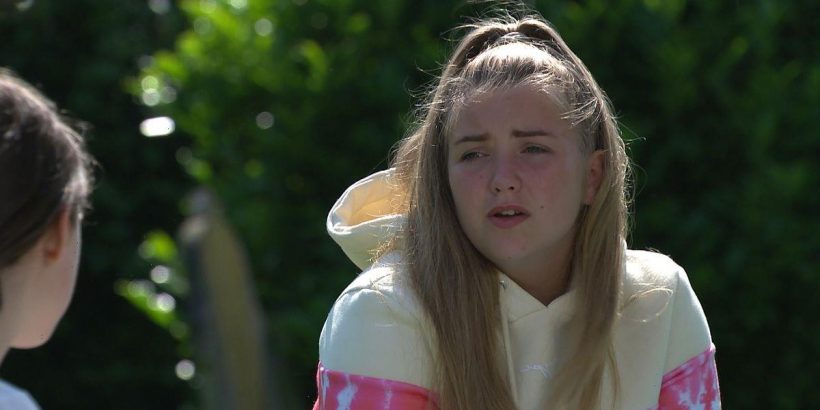 Emmerdale is set for dramatic scenes next week as Cathy Hope breaks down and tells April Windsor that she is the person who started the online bullying.

Only recently, viewers were left disgusted after it was revealed that Cathy was April's "evil" bully and had been tormenting her online over the past few weeks.

In upcoming scenes, Cathy reveals to April that she was the one who started the online trolling. April is furious, and Cathy is terrified about the consequences.

The next day, Heath reveals that Cathy has gone missing, leaving Bob and Brenda frantic with worry. But it’s a furious Rhona who finds Cathy, and tells her she’s going to tell the school, as well as Bob and Brenda about what she’s done.

Cathy tries to run away, but as Rhona grabs her, Brenda appears and a scuffle ensues. Rhona pushes Brenda and she falls. Have things gone too far?

Elsewhere, April's father Marlon is stressed out about the Woolpack finances. Coming up with the idea of a barbecue to lure the punters, he ropes in Matty to help. However, when Matty squirts lighter fluid on to the grill, it causes a fireball and he gets burnt.

Moira is furious at Marlon for the accident and insists Matty is paid compensation. Chas worries how they will be able to afford it and is left shocked when an offer of help comes from an unwelcome source.

Also, Al suggests Ellis and Priya join forces for a boot camp survival event. The pair like the idea, but Priya tells Billy to pitch it to Kim before Al runs off with all the credit.

It was revealed last month that Cathy was in fact April's "evil" bully after the character was targeted online with the troll even sending a sick meme of her late mother Donna.

At the time, viewers were left disgusted over the revelation and one viewer tweeted: "Darn it’s been Cathy all along #Emmerdale."

A different soap watcher commented: "I knew it was Cathy!!!!!#Emmerdale

Another fan exclaimed: "CATHY, HOW COULD YOU?! #Emmerdale."

A different viewer put: "Knew it would be cathy!! #Emmerdale."

While another account added: "I hope that nasty Cathy gets dealt with in a nasty way. To do that to your own niece and mock your own dead sister. #Emmerdale."

For all your updates on Emmerdale and juicy spoilers, sign up to our daily OK! newsletter.