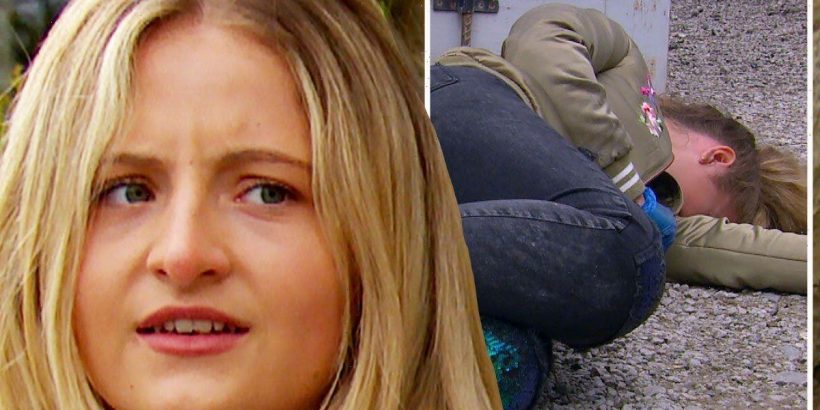 Emmerdale: Dan and Amelia both collapse after accident

Amelia (played by Daisy Campbell) has become the focus of a self-confidence storyline on Emmerdale in recent months, with the youngster becoming obsessed with the number of likes she receives on social media posts. In order to be what she believes is the best version of herself, she has begun to change her physical appearance, whether this is through extreme forms of exercise or taking dangerous substances. Something from Friday’s edition of the ITV soap seemed to indicate the teenager is going to get herself into a problematic situation that she might not be able to get out of.

One of Amelia’s latest attempts to change her appearance came as she began drinking weight gaining syrup to make parts of her body look bigger.

Unfortunately, this came as a result of a conversation with Samson Dingle (Sam Hall), who inadvertently gave her the idea to buy such products.

Instead of feeling scared by the impacts the supplements can have on someone’s body, she was keen to buy them and as soon as she got the package, she was constantly drinking it.

The negative effects soon kicked in as she started to get blurry vision as she couldn’t read some of the revision she was doing.

This is only going to get worse in the coming weeks until someone other than Cathy Hope (Gabrielle Dowling) realises what the young woman is doing to herself.

However, from these scenes of the young woman drinking the harmful syrup, viewers took to Twitter to voice their suspicions this could kill her.

Michelle wrote on the social media platform: “What did Amelia just drink? She’s gonna end up killing herself #Emmerdale.”

Dan added: “Hopefully Amelia realises that stuff can be dangerous #Emmerdale,” with Chris writing: “#Emmerdale will they take the Amelia story right to the end or just a visit to the magic hospital?

“#Emmerdale If they don’t really hurt or kill Amelia off aren’t they setting a really bad example to young vulnerable people,” they continued.

What did Amelia just drink?

As Amelia ingests more of the dangerous syrup, it could be she is going to end up poisoning herself and she will need help to reverse its effects.

Unfortunately, it could be too little too late by the time she is admitted to the hospital and the medical professionals get to work.

The amount she has been drinking could result in organs shutting down and with no hope of getting a transplant in time, she could die.

Emmerdale are trying to highlight the dangers of young people trying to change their appearance by unconventional and harmful means.

But in order to make the most impact, will they decide to kill off the beloved character?

It was explained by the producer of the show, Laura Shaw, that another villager would be facing a health crisis following Marlon Dingle (Mark Charnock) suffering a stroke.

Speaking with Express.co.uk and other media, she said: “Marlon’s long recovery continues, another character will face a health storyline.

“It will have a huge impact on everyone close to them,” she continued but could this character be Amelia?

The youngster’s death would send shockwaves around the village and would have an effect on several of the show’s best-loved characters.

How will they react when they discover she poisoned herself and will they realise Cathy knew about Amelia taking supplements?

Executive producer Jane Hudson has also spoken about the importance of the younger cast taking centre stage in storylines.

Speaking to Express.co.uk and other media, she said: “I think it’s really important for the show that we have stories aimed at everybody.

“What makes soaps different from a lot of dramas is our reach, which is teens right up to 90 plus. We’ve got a lot of viewers to keep happy.

“This year the likes of Noah, Amelia, Samson, Archie, Cathy and Sarah – you’re going to be seeing them much more prominent in the stories.”

“Because they deal with topics that affect their generation and we see how they handle things,” the soap boss continued.

“It’s really important that we keep our youngsters coming through because they are our next generation.”

Amelia has been a member of the cast for over 10 years and she has become a character in her own right in recent years due to the more mature storylines she has been tackling.

Will this really be the way she leaves the show or are writers wanting to take the youngster on a much darker journey?