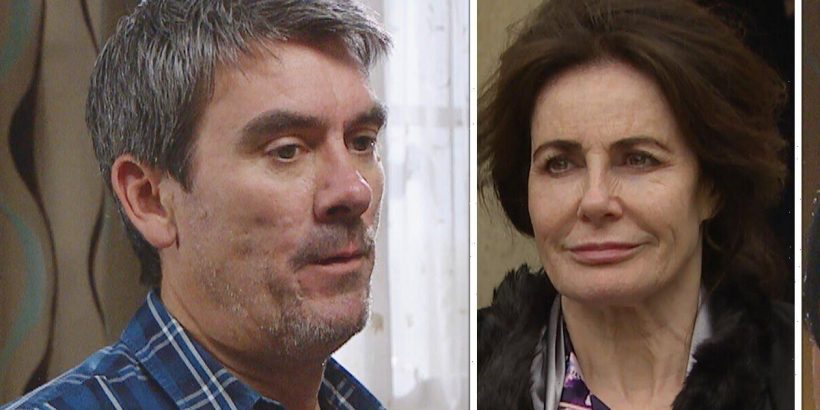 Last week, Dingle matriarch Faith (played by Sally Dexter) revealed to her children Chas Dingle (Lucy Pargeter) and Cain (Jeff Hordley) that her breast cancer had returned and was incurable. As expected, the Dingles struggled to come to terms with the news as Cain remained bitter about their strained relationship. Now a new theory from Express.co.uk could see Cain accused of murder after refusing to help Chas convince their mother to get the chemotherapy help she needs.

During Monday night’s episode, Chas and Cain continued to battle with the news that their mother was dying.

Chas and Faith had an emotional conversation where she begged her mother to speak to her specialists and go through the chemotherapy process.

However, Faith was unsure as she had already been told it was incurable and only had a couple of months to live.

Chas asked her mum how the treatment was going, and Faith revealed: “Well, I have done two out of the three initial rounds of chemo so far.

“And apparently, they are just waiting to see where we are after the third. I wouldn’t say no to a new set of lungs, except it is in my bones too.

“I think the chemo is not for me, Chas, not this time. The best it is going to do is give me a couple more months, but at what cost, I think it is time to knock it on the head.”

Confused at what her mother was asking, Chas broke down at her mum’s revelation.

Later, Chas paid Cain a visit and begged him to help her convince Faith to carry on with the chemotherapy treatment.

Cain bitterly replied: “It’s her choice, it’s not going to save her, she is terminal that is what she is saying.

“She is playing you, and you are buying it. You do realise she is doing this for effect?”

Chas furiously shouted back: “What the hell is wrong with you, she is dying! So will you please give her a reason to fight, to prolong whatever time she has left, you owe her that much.”

Later, Cain bumped into Liam Cavanagh (Jonny McPherson), where he revealed that he knew about her diagnosis before anyone else due to working in the surgery.

Furious at the revelation, Cain pushed Liam to the ground and stormed off, as he tried to battle through his emotions.

Faith and Cain have had a troubled past, with the pair not speaking to one another for a number of years.

His distant and cold attitude towards his mother could set tensions high between the Dingle family, with Chas trying to save their mother on her own.

Could Cain put aside his bitter feelings and join forces with his mother to help her to die?

Faith has made it clear that she no longer wants to prolong the inevitable, so she could turn to her son in a time of need.

If Cain helps Faith, will he be accused of murdering his mother in an explosive twist?

Chas actress Lucy Parteger recently opened up about how her character reacted to the news and explained: “It’s not looking good for Faith.

“She says she’s not going to go for the chemo, but Chas has talked her into it; it’s not Faith’s decision herself.

“It’s Chas saying, ‘come on, mum, you’ve got to do it, you can’t give up’ so Faith does the right thing for her daughter and goes for the chemo.

“Chas, underneath it all, knows it’s not going to lead to a great diagnosis long term,” she told Digital Spy.

Emmerdale airs Monday to Thursday from 7pm on ITV.