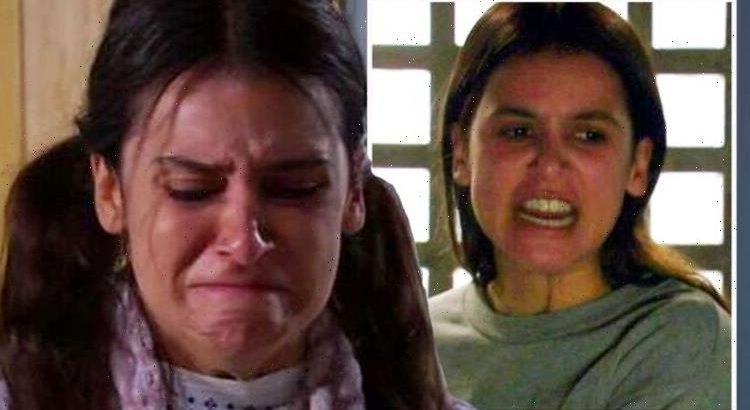 Meena (played by Paige Sandhu) was never going to walk free after the jury found her guilty of murder in last week’s episodes of Emmerdale. The most recent instalment of the ITV soap saw her sentenced by the judge, who bestowed upon her three life sentences of a total of 75 years for killing Leanna Cavanagh (Mimi Slinger), Andrea Tate (Anna Nightingale) and Ben Tucker (Simon Lennon) last year. Fair to say, this was not the outcome the villain had expected but her ordeal might not be over just yet as she may well find herself in danger from other criminals.

As the judge made his ruling, Meena was in a state of disbelief not only because there was a very small turnout but she believed she shouldn’t be punished for killing the villagers.

With the sentencing made, the villain kept stating: “You’ve got me all wrong. This isn’t right,” but her pleas were not acknowledged.

When it was time for her to be sent down, Meena turned around on the stand and begged her sister Manpreet (Rebecca Sarker) to help her.

Unfortunately for her, having been held hostage and almost killed by her sister on a number of occasions, the doctor just watched with a blank expression on her face.

Liam Cavanagh (Johnny McPherson) decided to stay in the village instead of listening to the sentencing and as he made his final speech to his late daughter Leanna, her killer could be seen clawing at the prison guard to let her go.

Locked up in her cell, never to see the light of day again, Meena cried out in desperation as she didn’t want to be isolated.

With the latches up and no one around to hear her pleas, the villain was talking to herself as she asked: “Is there anyone there?

The end of the dramatic instalment marked the end of Meena’s journey on the show on-screen as it is likely she will be referenced by Manpreet in the future.

However, one of these instances could be when the doctor discovers her sister has been killed in prison by her other inmates.

Not wanting to live out her days in jail, Meena could have targeted some prisoners she knew would take her out if she goaded them enough.

The villain’s plight would have been successful but it would have happened off-screen as it could be in a few months’ time Manpreet is given the news.

It could form the basis of a new storyline as the impact of her death on the residents of the village would be far-reaching.

Not only would it have an impact on Manpreet, but Liam would also have a reaction to his daughter’s killer meeting her maker.

A few others, such as David Metcalfe (Matthew Wolfenden) and Billy Fletcher (Jay Kontzle), would also be affected seeing as they had romantic relationships with her.

It could be an eerie end to Meena’a time on the show, given how much damage she caused and the lives she changed with her actions.

Producer Kate Brooks spoke with Express.co.uk and other media and explained there was going to be an alternative ending to the villain’s storyline.

The show boss said: “She has given us so much storyline recently that of course there is always that temptation to let her get away with it.

“A person who is capable of such heinous crimes and has no remorse can’t stay long in the village; they can’t continue on that path because there is nowhere else for her to go.

“We knew that we needed to draw a line under it, not just for the viewers but for our characters who are left, they need justice and need for Meena to be punished for her crimes.”

“If they don’t get the closure then there is no way to move them on as characters,” Kate continued to explain.

“So we knew that we had to let Meena’s fate rest in the hands of the soap Gods; and so I hope people will be very satisfied with what she gets.

“This woman wreaked havoc on the village and destroyed lives. Liam lost his daughter, Manpreet has been through it all.

“So I think we were very conscious not to tie it up in a very neat bow and say well, Meena is gone, so let’s move on.

“The ramifications will continue around the village for a very long time after Meena has gone, we have got loads coming up over the rest of the year.”

Viewers will be pleased to see the back of Meena as some of them have been sharing their reactions to her exit on Twitter.

Michelle wrote: “I’m not ready to say goodbye to queen Meena Jutla she will go down as my favourite Emmerdale villain.”

Matthew added: “I’ll be breaking out the Champagne! And she can stay gone I don’t want her anywhere near the 50th in October, artistic licence or not!.”

Pat commented: “Huge congratulations to the writers and researchers for Meena’s storyline it’s been fantastic and I’m going to miss her.”