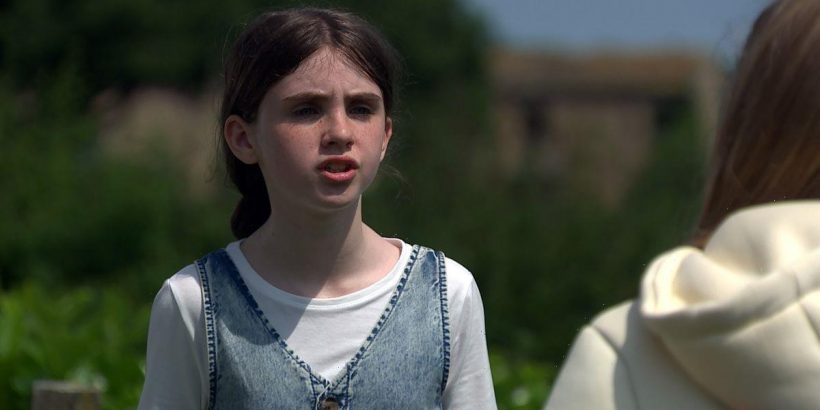 Emmerdale was full of drama on Wednesday night as April Windsor finally discovered that her aunt and friend Cathy Hope is the person who started the online bullying.

Only recently, viewers were left disgusted after it was revealed that Cathy was April's "evil" bully and had been tormenting her online over the past few weeks.

During the latest instalment, Cathy finally came clean as she said: "Please don't hate me!"

To which a hurt April replied: 'You're my mum's little sister, you're my aunt, you're supposed to look after me!

"It's wrong and it's horrible, I'm telling my dad, Rhona and the school what you have done. I'm telling everyone, you big bully!"

With Cathy replying: 'I'm not a big bully, I'll get sent away!"

Delivering a parting blow, April declared: "I wish you were in the grave instead of my mum, you made me say that!"

Soap fans were left heartbroken for April as despite claiming she would tell everyone that she is the bully, she continued to remain silent about her discovery.

A different account put: "April should tell her dad and Rhona #Emmerdale."

In upcoming scenes, Heath reveals that Cathy has gone missing, leaving Bob and Brenda frantic with worry. But it’s a furious Rhona who finds Cathy, and tells her she’s going to tell the school, as well as Bob and Brenda about what she’s done.

Cathy tries to run away, but as Rhona grabs her, Brenda appears and a scuffle ensues. Rhona pushes Brenda and she falls. Have things gone too far?

It was revealed last month that Cathy was in fact April's "evil" bully after the character was targeted online with the troll even sending a sick meme of her late mother Donna.

At the time, viewers were left disgusted over the revelation and one viewer tweeted: "Darn it’s been Cathy all along #Emmerdale."

A different soap watcher commented: "I knew it was Cathy!!!!!#Emmerdale

Another fan exclaimed: "CATHY, HOW COULD YOU?! #Emmerdale."

While a different viewer added: "Knew it would be cathy!! #Emmerdale."

For all your updates on Emmerdale and juicy spoilers, sign up to our daily OK! newsletter.