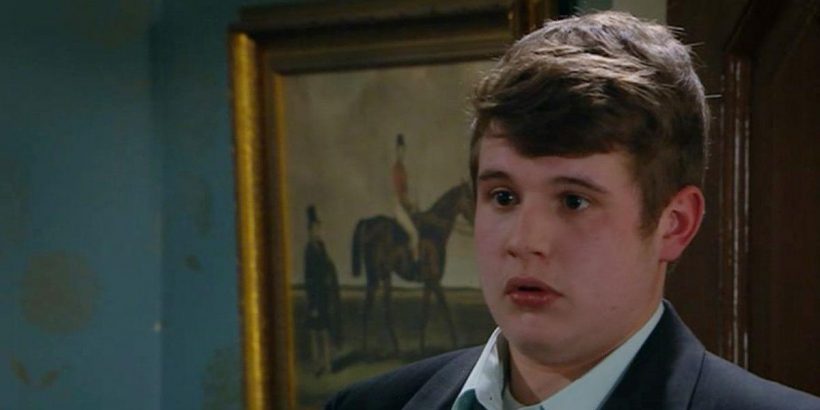 Emmerdale fans were heartbroken back in 2018 when Gerry Roberts was killed off.

The teenager, who had been Lachlan White’s cellmate during his stint in jail, was murdered at the hands of his former friend.

He first appeared in the Dales in 2017, and became a firm favourite after striking up a friendship with Liv Flaherty.

Lachlan murdered Gerry with a brick at the B&B after he found out the horrifying truth that the youngster orchestrated the deaths of his mum and grandad, Chrissie and Lawrence.

But where is actor Shaun Thomas now? From his major Hollywood roles to his stint in Casualty, Daily Star has taken a look into the star’s life since Emmerdale.

Why did Shaun leave Emmerdale?

Shaun admitted he was "shocked and upset" after learning his character Gerry would be killed off.

He admitted at the time that he was only supposed to appear in Emmerdale for two episodes while filming the prison scenes with Lachlan.

Shaun confessed: "It were a shock because I was only meant to come here for two episodes in the prison scenes with Lachlan, and then I ended up staying here for a year and a half.

"So I really got used to being around everybody and making a connection with everybody. And then to be told that it would be coming to an end, it were pretty upsetting."

He admitted he would have stayed in the show if he’d been asked – but sadly wasn’t given the chance.

Since leaving Emmerdale, the star has picked up a major role in coming-of-age comedy Ladhood, alongside the likes of Liam Williams and Oscar Kennedy.

Shaun played Tom Cragg for 12 episodes of the show from 2019 to 2021, and definitely seems to be enjoying it, as he regularly promotes the programme on his Twitter page.

He also starred in drama flick Ali & Ava this year as Callum.

But before his Emmerdale stint, Shaun made a name for himself in teenage blockbuster hit Miss Peregrine’s Home for Peculiar Children, with stars including Judi Dench, Samuel L. Jackson and Asa Butterfield.

He portrayed Dylan, a teenage beatboxer, in the film.

Shaun has also appeared in films like The Brothers Grimsby and The Selfish Giant, along with an episode of crime drama WPC 56 back in 2014.

Emmerdale isn’t the only soap Shaun has appeared in.

Despite racking up an impressive stint of 92 episodes of the ITV favourite, he went on to appear in a very different soap entirely after Gerry was killed off.

He went on to appear in an episode of BBC medical soap Casualty earlier in 2021, as Bruno Wilding.

And though he only appeared in one episode, he made a definite impression on fans, as they took to Twitter to gush about Shaun’s appearance.

"Gerry from Emmerdale is on Casualty!!" one eager fan penned, while another rejoiced: "Gerry’s alive!"

Someone else followed up: "It’s Gerry from Emmerdale, remember him! #Casualty."

Shaun’s career hasn’t only been marked by his acting credits.

He’s also scooped up a few awards along the way.

The actor was awarded the Best Supporting Actor trophy in 2014 at Film Club’s The Lost Weekend awards for his role in short film The Selfish Giant.

He also picked up an award for Best British Newcomer at the London Film Festival for the role, sharing the award with Conner Chapman.

He’s also been nominated for three other awards for his performance in the short film, which was later broadcast on Film4.

Though you can take Shaun out of Emmerdale, it might be a bit tougher to separate him from his co-stars.

The star still follows some of his former co-stars on Twitter, including Mark Charnock who plays Marlon Dingle, Amy Walsh who plays Tracy Metcalfe, and Liv Flaherty star Isobel Steele.

James Hooton, best known for playing Sam Dingle in the Dales, was also quick to praise Shaun, tweeting in 2018: "Real shame to lose a charismatic young talent like @ShaunThomas97, a joy to work with and fun to be around!

"I look forward to watching his career soar onwards and upwards! Needs to work on his tracking back at football though…" he added cheekily.

Former Emmerdale star Adam Thomas – who fans will know from his stint as Victoria's husband Adam Barton in the soap – also reached out to congratulate Shaun on his performance.

Writing on Twitter, the I'm a Celeb star penned: "The world is yours bro, congrats on everything you've achieved so far my man… now the fun begins! Wish you all the best."

But he also had an effect on those a little further away – in Manchester, in fact.

Reaching out on Twitter at the time, Andy wrote: "Alright mate, just wanted to say me and my wife thought you were brilliant in @Emmerdale, gutted you’ve left but I’m sure you’ll do really well, all the best for the future."

A clearly emotional Shaun replied: "Thank you mate. Glad you enjoyed it pal. Thanks for the tweet. Hope the family’s good."

Andy went on to add: "No worries at all mate, we thought you were hilarious at times […] I’m sure you’ll have a great career, congratulations with what you did on Emmerdale, you should be proud."