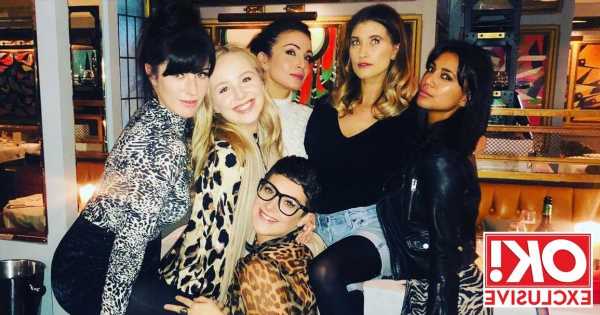 We know and love (or sometimes love to hate) their characters on screen, but now it’s time to discover all the behind-the-scenes secrets from our favourite soap stars.

In OK!'s exclusive interview, Soap Stars Coming Clean, we're finding out all the juicy gossip about what happens when the cameras stop rolling, as well as the actors’ favourite memories with their co-stars so far.

We recently caught up with Emmerdale actress Laura Norton who recently returned to the soap as Kerry Wyatt. Here, she opens up about the early days of her romance with Mark Jordan, looks back on living with her co-star besties and shares details of the time she and Samantha Giles were booted off set

What’s your favourite memory on the show so far?

I've had to go with my top three as I couldn't pick just one. The earliest one would be when Kerry hit rock bottom and burned down Andy Sugden's (Kelvin Fletcher) house. It was my first time doing night shoots and stunts – I even had a stunt double which I thought was amazing!

My other one was Dan Spencer (Liam Fox) and Kerry's wedding. It was so much fun. Getting to dress up in that wedding dress. Having to learn a dance routine and do it in the middle of the Woolpack was a bit daunting but we just went for it and had a right laugh.

Finally, when Daz Spencer (Mark Jordan) came back – obviously I was with Mark at the time and we got to work together and build a relationship together at the same time.

What do you always have in your dressing room?

I've always got fairy lights for a bit of nice ambience and I've got a little elephant that's become my lucky charm. I just walked into my dressing room one day and it was there. I still don't know who got me it or where it came from.

Who’s the messiest member of the cast?

I'd have to say me! I can't throw anyone else under the bus. My corner of the dressing room when we used to share was a bit ridiculous. I had boxes on the floor, a pile of magazines and I used to get told off all the time!

Who are your funniest co-stars?

Everyone is absolutely hilarious but I'd have to say KDB (Katherine Dow Blyton). She's so funny, so sarcastic and it never stops. She played my mum in a play about 13 years ago so we were really good friends. When she joined Emmerdale we already had a good relationship and we just laughed so much.

Leslie Dunlop and Samantha Giles are hilarious too. Sam and I laughed so much one day we got sent off set to go and calm down. We got so giddy and Sam knocked loads of props over.

What’s the best night out you’ve ever had with your co-stars? Tell us about it…

A lot to choose from! But there was a huge party after the 40th anniversary episode of Emmerdale. I remember being so happy. Everyone got drunk really quickly and we were all euphoric. I danced until I couldn't dance anymore.

Which celebrity would you love to see doing a guest role?

Who are you closest to from the cast?

Far too many to choose from! I was in an amazing dressing room with Roxy Shahidi, Fiona Wade, Eden Taylor-Draper, Isabel Hodgins, KDB. I also lived with Isabel, I lived with Fiona, I lived with Chelsea Halfpenny. I've been in a band with Michelle Hardwick and Amy Walsh. I was dead close to Kelvin as well. It sounds so cheesy but the cast really do love each other.

Are there any old cast members (who have left) that you’re still in touch with?

Obviously Mark [Laughs]. We live together and have a child together now. I still see and speak to Chelsea all the time. I keep in touch with Kelvin and went to see him on Strictly. I went to Sammy Winward's wedding and I see her all the time. Loads of people!

If your character could have a romance with anyone in Emmerdale, who would you like it to be?

This is random, but Paddy Kirk. Me and Dominic Brunt have had a few scenes with each other and I think the characters would be so funny together.

If you could play another character on the soap, who would it be and why?

Laurel Thomas. I've always said that just because she's so far away from the character that I play at the moment, but quirky enough to get my teeth into. She's such a sweet character and I love the way Charlotte Bellamy plays her.

What’s the strangest or funniest fan encounter you’ve ever had?

I went to V Festival with Chelsea and Isabel. We got talking to this couple who thought that I was Chelsea's mum in real life. I'm only six years older than her, so it wouldn't even b possible!

For all the latest cast updates and juicy Emmedale spoilers, sign up to our daily OK! Newsletter.

Do you ever have to go out in disguise to stop people recognising you?

I've never had to go out in a disguise. I don't seem to get recognised. Kerry's larger than life and wears crazy costumes and lots of makeup. I don't dress like her, I don't wear loads of makeup when I'm out… it's only when I open my moth that people start to recognise me.

If you weren’t an actor, what would you be doing?

I don't know if I'd have ever achieved this but I'd love to have been a forensic scientist. I really enjoy all the crime dramas where they analyse the blood splatter patterns.

It’s not unheard of for actors to swap soaps… if you weren’t in Emmerdale, what soap would you like to be in?

EastEnders. I'd like the challenge of seeing if I could hold up a cockney accent and make it believable. It'd be hard, but I'd love to try.