A review of this week’s Fargo, “The Nadir,” coming up just as soon as I stand between you and a lifetime of being dog catcher…

Early in “The Nadir,” Loy Cannon’s henchman Opal Rackley brings him the bad news that his plan to free Gaetano so that one Fadda brother would kill the other has failed, and the brothers are closer than ever. “So what do we do?” Opal asks. Loy’s answer is short and direct:

He is referring to his pals from up north who owe him a favor for the guns he gave them. But the line has a double meaning due to this series’ title. This has, to date, been the least Fargo-y of Fargo seasons for a variety of reasons, from the emphasis on gangster maneuvering over human behavior to the miscasting of our central mob bosses to the way these middle chapters have been structured. In that moment, it almost feels as if Loy himself is also recognizing that none of this is working out the way that it should, and that the only hope left is not Fargo the place, but Fargo the mood.

“The Nadir” doesn’t quite recapture the vibe of the series at its best. There’s still a lot of Josto and Loy (and barely any of Ethelrida, while Rabbi and Satchel remain absent entirely for yet another episode), and there are two different action set pieces in the concluding passages. But one of them happens to be terrific — even if, due to its location, it mostly evokes a famous non-Coen brothers movie — and some of the individual moments and interactions are stronger than this season has presented in a while. If it’s not exactly Fargo yet, at least it’s closer.

The big highlight is Deafy and the cops attempting to catch Zelmare and Swanee before they can board their train to Philadelphia. Though the season is set in Kansas City, it was filmed in and around Chicago. That means the outlaws’ plan to go down with their guns blazing is filmed in that city’s Union Station, previously home to one of the more iconic shootouts ever put on film: the staircase sequence from 1987’s The Untouchables. (If you haven’t seen it, I highly recommend taking the 10 minutes to watch now. This recap will be here when you get back.) It’s a great-looking space, ideal in its architecture for period pieces, and “The Nadir” tries not to dwell too much on those steps. (Though Deafy does move through several other areas that Andy Garcia traversed in the film.) Mostly, though, the focus is on Zelmare and Swanee trying to live up to the code they told Ethelrida about earlier in the season. Neither has any illusions of making it out of the station alive, especially since both at different points spot a ghost creeping up on them. They’d rather die than be caught, and find the whole thing incredibly romantic, no matter the collateral damage. Their kiss right before Zelmare pulls out her Tommy gun and Swanee unholsters her six-shooters is classic, widescreen Hollywood all the way — and a case of the show briefly turning two minor characters into something major. Regardless of my disappointments with other parts of this season, when I think back on classic Fargo TV moments, that kiss and its immediate aftermath will be high on the list.

The only disappointment of the shootout is that, as the dad in Walk Hard(*) liked to put it, the wrong kid died. Or kids, in this case. Odis, desperate to finally act like a real cop again — or, at least, temporarily convinced that this is what he wants to do — gets his OCD under control long enough to charge in and see the aftermath of the women’s rampage, and to find them cornered by Deafy, out of ammo. But rather than keep playing hero — or, at least, hero’s sidekick — Odis instead sees an opportunity to free himself of Deafy by killing him and any witnesses to the crime, shooting the marshal and Swanee before he loses steam and lets a hysterical Zelmare charge past him and get away. Neither Deafy nor Swanee were especially crucial parts of the story, but both were vastly more entertaining than Odis has proved to be. And by killing them and going back to his crooked roots, he now likely becomes even more crucial to whatever this season’s endgame is.

(*) Played by Raymond J. Barry, who was Timothy Olyphant’s dad on Justified.

But that’s a problem for another episode. The train station sequence as a whole is so vibrant that it almost singlehandedly elevates a lot of this sluggish middle portion of the season. At the same time, it renders the shootout that follows between Gaetano and the boys from Fargo a bit of an anticlimax. Gaetano again is presented as superhuman, wading into rifle fire with only his two pistols and living to tell the tale, but he and Josto suffer a huge casualty: their mother. Salvatore Esposito sells Gaetano’s grief and fury at the discovery, even though Mrs. Fadda was, like so many of this season’s women, barely even an afterthought, so the moment doesn’t really land.

Far more effective is the Fadda brothers’ reunion earlier in the episode, where we see how Loy’s plan backfired. Rather than seek vengeance on his brother for leaving him to die at the Cannons’ hands, Gaetano instead returns with newfound respect for Josto, “the chameleon,” who suddenly seems craftier and more ruthless than Gaetano initially suspected. We know that Josto mostly just stumbles into good fortune, but it’s still an amusing turn of events, because Gaetano seems like a much bigger pain to be around when he’s your friend than when he’s your enemy. The version of Gaetano who wanted to kill everyone all the time did not seem sustainable, whereas this one, who violently loves too much, brought him just close enough to human scale without taking away the livelier aspects of Esposito’s performance. Though now that he wants to avenge his mother, we’ll see how long this more genial version of the character lasts. 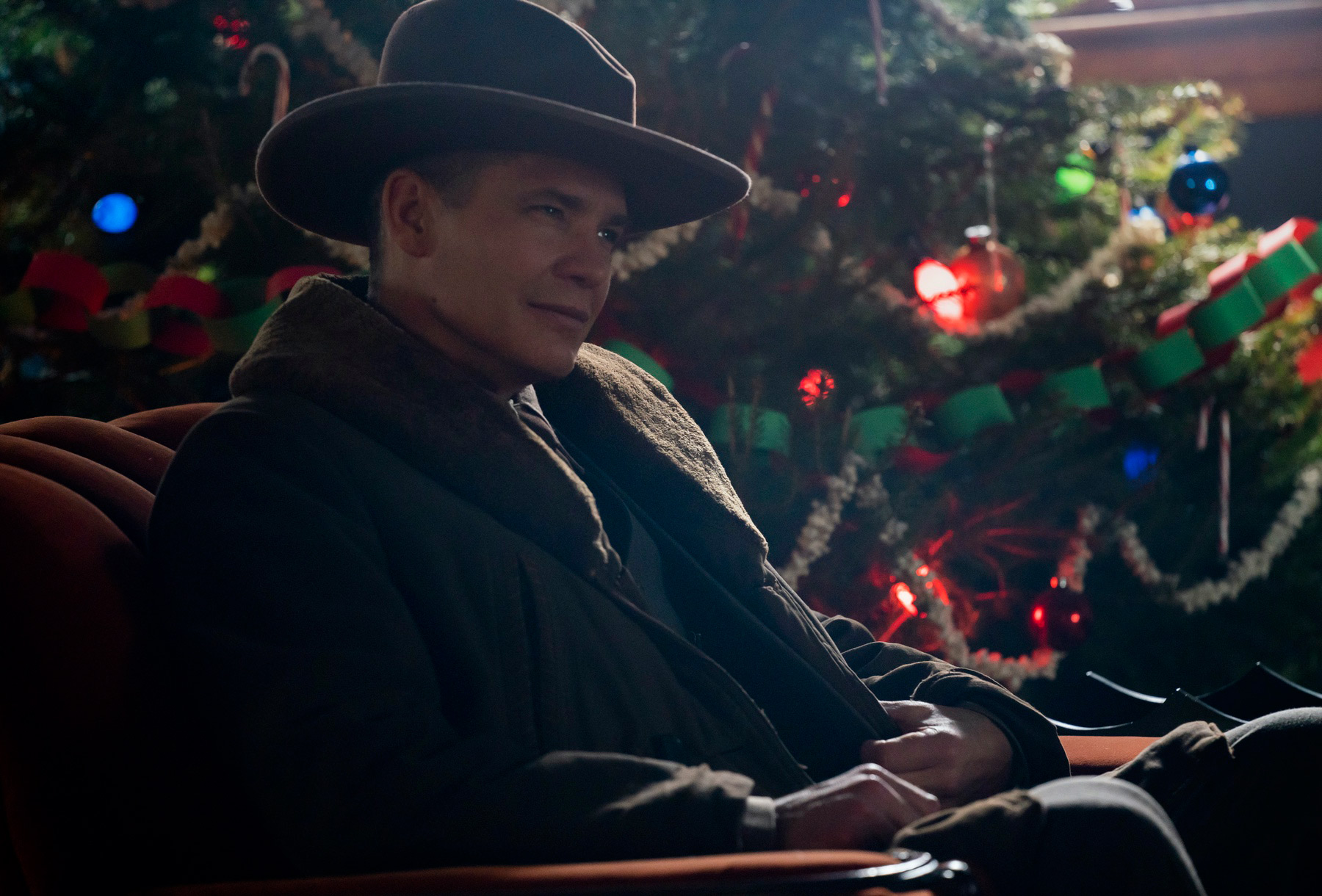 Ethelrida remains frustratingly marginalized — it feels like a million years ago that she was the story’s narrator and central character — but she does get a decent moment with Lemuel Cannon where they talk about his love of jazz. Lemuel enjoys going where the music takes him, he explains. “I like structure,” she replies.

Structure has very much been lacking from Fargo of late. “The Nadir” doesn’t entirely solve this problem — it’s not hard to imagine pieces of the episode having originally co-existed with scenes from the last few before Noah Hawley started re-editing — but it has dramatic highs to cover for it that recent episodes lacked.

And next week? Well, I’m really looking forward to talking with you again next week.

* Kelsey Asbille really was a lot of fun in her brief pockets of screen time as Swanee. If she has to go, at least it’s with a link to her other current TV job on Paramount’s Yellowstone, where she has a supporting role opposite… Untouchables star Kevin Costner.

* As for Timothy Olyphant, in hindsight it feels like a bit of a mistake to have cast him in this role. That’s less because it’s such an on-the-nose choice — after all, The Mandalorian just did the exact same thing with him — than it is that hiring him to play such a Raylan Givens-esque figure created unfair expectations for what turned out to be such an inconsequential role. As a one-shot appearance, it works just fine. As someone who was in the majority of the season — albeit often appearing only briefly in some episodes, and not at all in others — it just feels disappointing when he’s killed so abruptly. He doesn’t even work as a red herring, because it’s not like Deafy had been positioned for significantly more important things. The whole thing feels like a waste, especially since so many more prominent roles on the show don’t fit their performers nearly as well as this one fit Olyphant. Oh, well. At least he got one last opportunity to play smug, in the scene where Deafy makes clear how little he thinks of Loy’s moral code, while Loy in turn describes Deafy’s brand of Mormon unfriendliness as “like you’re doing me a favor.”

* Finally, Oraetta remains stuck largely on the fringes, though this week she has more enemies to add to her list, now that she both knows Dr. Harvard survived her macaroon poisoning and connects the dots to Ethelrida and the incriminating letter. The most interesting scene she’s in is actually more revelatory about Josto, as he alludes to having been molested by Owney Milligan during the time when he and Rabbi were traded for one another.