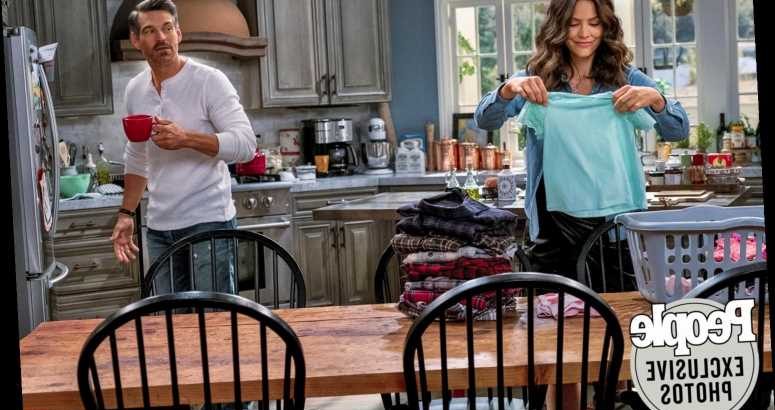 Katharine McPhee is about to sing a new tune… and we're not just talking about the upcoming arrival of her first child with husband David Foster.

The singer and actress, 34, stars in the new Netflix comedy series Country Comfort — which PEOPLE can exclusively reveal will premiere on March 19 — as an aspiring singer named Bailey who takes a job working for a rugged cowboy named Beau (played by Eddie Cibrian) as a nanny to his five kids.

But here's the twist: Those kids are all musically gifted. As Bailey navigates the family dynamics and becomes a mother figure to the kids, she finds the band she's been missing — and may find her way back on the road to stardom.

In photos exclusive to PEOPLE, we see Bailey folding laundry — she's so domestic! — as Beau looks on, as well as her performing with Eric Balfour's character and playing music with Beau's kids. Country Comfort is the second of a four-month streak of star-studded new sitcoms joining their lineup between now and May.

The first, The Crew, starring Kevin James, launches on Monday, Feb. 15. James plays the crew chief for a NASCAR racing team. When the team's owner steps down and hands it to his daughter (Jillian Mueller), James' character tries to protect his teammates from too many changes. Freddie Stroma (Bridgerton) and Sarah Stiles (Billions) also star.

Jamie Foxx's new series, Dad Stop Embarrassing Me!, is inspired by the Oscar winner's relationship with his daughter Corinne. Foxx plays Brian, a father struggling to balance the pressure of running a family cosmetic business with raising his teenage daughter Sasha (Kyla-Drew) — who's regularly mortified by Brian and her grandfather (played by David Alan Grier).

Created by Regina Hicks and Wanda Sykes, The Upshaws is a return to the complicated and relatable Black family sitcom. Mike Epps, Sykes and Kim Fields star — and Epps and Sykes also serve as executive producers alongside Hicks, Page Hurwitz and Niles Kirchner.