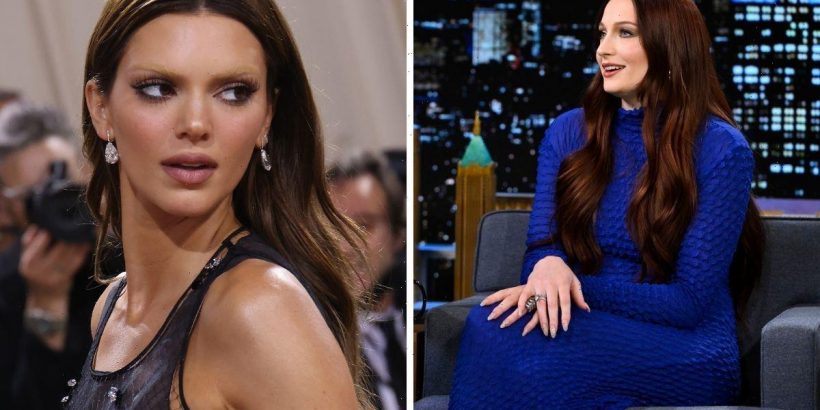 The Sansa Stark actress made the admission while chatting with Jimmy Fallon on The Tonight Show. It came as the presenter asked the Game of Thrones icon if she still became “star-struck” around celebrities. As the 26-year-old confessed she is “bad around celebrities”, she shared an awkward interaction with The Kardashians’ Kendall Jenner in which she “shut down” her offer of attending a party.

“You’ve been to the Met Gala before, do you get star-struck anymore?” Jimmy asked.

He continued: “Are there any celebrities you’re like, ‘Ohh, wow’?”

“Like, I can’t quite fathom that I’m actually invited to these things and I’m not like a competition winner, you know?

“So, I mean, every celebrity I come into contact with, I act up or say something stupid.

“And recently, it’s been if a celebrity interacts with me, I immediately just shut them down and I’m like, ‘I don’t want anything to do with you.’

“And secretly I’m like, ‘Oh my God.’ But I’ve gone too far the other way before.”

“What’s a recent example?” Jimmy probed, leading Sophie to share the story of the uncomfortable encounter.

“So, Kendall Jenner was,” she continued as Jimmy reacted to the big name, prompting Sophie to joke to the audience: “Have you heard of her? She’s very…”

Jimmy laughed as Sophie continued: “Yeah, she was at the Met (Gala), and I love the Kardashians.

“But I think she’s like, so gorgeous in real life. And I was so like, struck by her beauty.

“And she invited me to this afterparty, this low-key afterparty.

“And then I just sat in bed and ate pasta and I was like, ‘Could be somewhere else right now.'”

“That sounds pretty good, by the way, sitting in bed and eating pasta,” Jimmy replied.

“You know what, it wasn’t bad,” the actress laughed.

Talking about her new role in The Staircase, which is based on a true story, Sophie explained: “This woman, Kathleen Peterson, she either fell or was pushed by someone down the stairs.

“And unfortunately, she passed away. And the whole documentary is following the trial of her husband, Michael Peterson, who they believed pushed her down the stairs.

Game of Thrones seasons 1-8 are available to stream on NOW now.