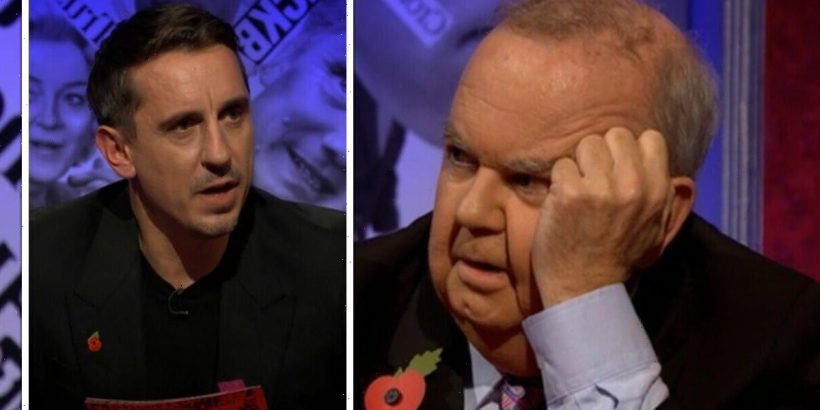 Former England footballer Gary Neville made his hosting debut on Friday’s instalment of Have I Got News For You. where was joined by Richard Madeley, Maisie Adam, Ian Hislop and Paul Merton. However, Gary was left “squirming” halfway through the episode when Ian called Gary out over his decision to be a commentator at the 2022 World Cup in Qatar following reports of the country’s “dreadful human rights record”.

Gary appeared sheepish when Paul asked how much David Beckham has been paid to appear at the Qatar World Cup which kicks off on November 22.

Gary tried to move away from the subject by asking Ian: “Ian, is it coming home?”

“What, your reputation?” Ian replied as Gary covered his face with embarrassment.

Ian continued: “The others have been very gentle with you Gary, but the elephant in the room is still there as you are commentating, aren’t you?”

Gary confirmed he will be reporting on matches at the World Cup and Ian was keen to know why.

Gary replied: “My view has always been that you either highlight the issues and challenges in these countries and speak about them or you don’t say anything and you stay back home. I’ve always said we should challenge them.”

However, Ian was not convinced and told the ex-footballer: “There’s another option is you stay at home and highlight the abuse, you don’t have to take the Qatarise’ money.

“I’m not trying to be [rude] but it’s just not a very good defence.”

Richard chimed in to ask how Robbie Williams or the Black Eyed Peas, who will be performing at the World Cup, will highlight the nation’s human rights abuses.

“Are they going to make a speech on the stage?” Richard asked the panel. “Of course, they are not.”

Gary disagreed and told Richard the issue can be highlighted during the commentary but he was ridiculed by Ian.

Ian pretended to commentate, saying: “It’s the kick-off here in this appalling country and honestly, someone is kicking a ball, but honestly, the amount of immigrant workers who have died, it’s a shocker.”

The awkward moment did not go unnoticed by Have I Got News For You viewers who took to Twitter to comment on Gary’s response.

Connor Andrews shared: “A very awkward moment for Gary Neville on #HIGNFY as Ian Hislop points out he could criticise Qatar’s human rights from home without taking their money.”

TP Smith said: “Gary Neville with absolutely no defence on why he’s taking a job with the Qatar national broadcaster for the World Cup. Credit to Richard Madeley for calling out the hypocrisy straight to his face #haveIgotnewsforyou #hignfy.” (sic)

Bumps added: “Have you ever seen Gary Neville squirm like a squid? #hignfy #QatarWorldCup2022.”

Archie said: “Neville looked like he wanted the ground to open up and swallow him! Hypocrisy exposed.”

Despite the backlash, Gary was praised by many Have I Got News For You fans over his presenting debut, with DJ Radders remarking: Well done @GNev2″ You did great on @haveigotnews.”

Have I Got News For You episodes are available to watch on BBC iPlayer.