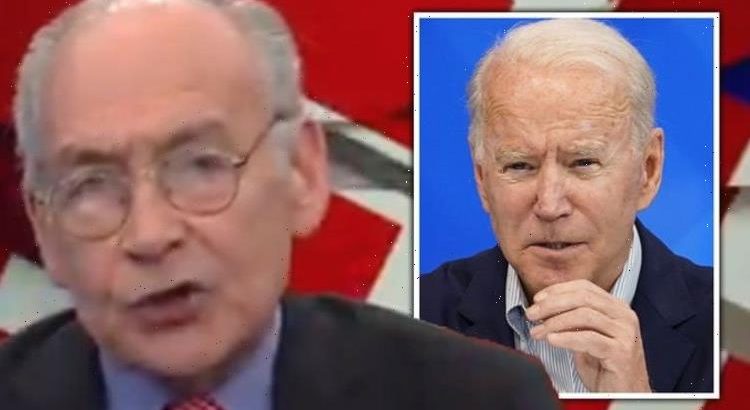 GB News: 'The rejection from Biden was brutal and humbling

Alastair Stewart launched an attack on Joe Biden on his Monday’s Viewpoint as he reflected on the withdrawal of US troops from Afghanistan. The GB News host blasted the US President for its “brutal” rejection of both the UK and Europe while revealing he’s dubious about what the future Taliban rule will look like.

Stewart began: “It’s the eve of President Biden’s deadline for departure from Afghanistan, the end of a 20-year incursion to crush the terrorists, whose act of terror humbled the United States with murderous and spectacular attacks on the twin towers on 9/11.

“Allies, ourselves included, begged for an extension to get more of their own people out to offer freedom and safety to Afghans good work with and for us, and to offer hope to other Afghans who prefer the status of refugee to battle hunted enemy of the Taliban.

“The rejection from Biden was brutal, and humbling for leaders, ours included.

“It was stark and with it came a brutal lesson, the United States has changed.”

“Biden backs Trump’s America first, with it needs to be a twist. America alone.”

“Well, tonight we look at what that means for the world before complacent in its post-war comfort of the United Nations, NATO, G7,” he continued.

“Now shaken to the roots by an America, pulling its full weight in public, and even global gaze.

“Also, what is the Afghanistan that we leave behind in the immediate term the seeds of a familiar Civil War blossom in the form of ISIS, suicide bombers seeking to attack an airport, which for a few more hours is under joint Taliban allied control as one group of US service personnel shuffled the last Afghans to go onto a mighty transport plane, and then themselves, others deep in the Nevada desert pilot drones to take out those anti-Taliban terrorists, and with them, their suicide vests.

“ISIS say the Taliban are softies, but in truth are big players.”

“Many who fought in Afghanistan and have seen it all before,” he vented.

“Say the Taliban will likely welcome with open arms, bigger, more sophisticated terror groups, again, to plot, plan and deliver their brand of mayhem across the world.

“It is jihad. It is what they do. Nevertheless, Boris Johnson is not alone in dangling the prospect of diplomatic recognition to the Taliban in aid, and the release of huge amounts of money, currently locked up by sanctions.

“If and only if they respect human rights, have a free and safe passage to those who remain after tomorrow, and basically play by the rules.”

“Bluntly the evidence on the ground for optimism is not promising,” Stewart remarked. “There have been many reports of revenge killings, beheadings of traitors and the return of Sharia punishments of whippings and amputations.

“China and Russia, however, seem to have no such qualms over such caveats. It’s more my enemy’s enemy is my friend, neither have such troubles over human rights and ultimately, as with the mafia, it’s business.

“There’s the second biggest copper mine in the world and reserves of precious metals vital to much of the new manufacturing from smartphones to electric cars, Chinese and Russian relations with Afghanistan, even under its new management grow stronger by the day.

“So two questions tonight: What can we expect from and within Afghanistan in the future? And, how will the democratic world reset the structures of the old post-war era, into something more viable, with a semi isolationist America, and a new heir to Second World War, fascism, and Cold War communism jihad?”

“I’ve lived with that post-war settlement and reported on it for 14 years. Gradually, it’s become clear to me that it no longer reflects the world that we now live in,” he shared.

“What’s more, the supremacy of democracy and a free market is no longer absolute as China grows and grows, what’s the point of a system that excludes them and will challenge them?

“Russia’s banded economy and oppressive foreign policy leave it sanctioned and accused to have state-sponsored murder. But under Gorbachev they became friends, under Putin, they’ve become a dangerous and corrupt spectre.

“I’m not sure what system if any can deal with all or any of that. But truly, the world needs something, not only to address a resurgent jihad, but also those two powerful outsiders making friends and cutting deals with those very people, and that is tonight’s viewpoint.”

GB News begins with the Great British Breakfast daily at 6am.