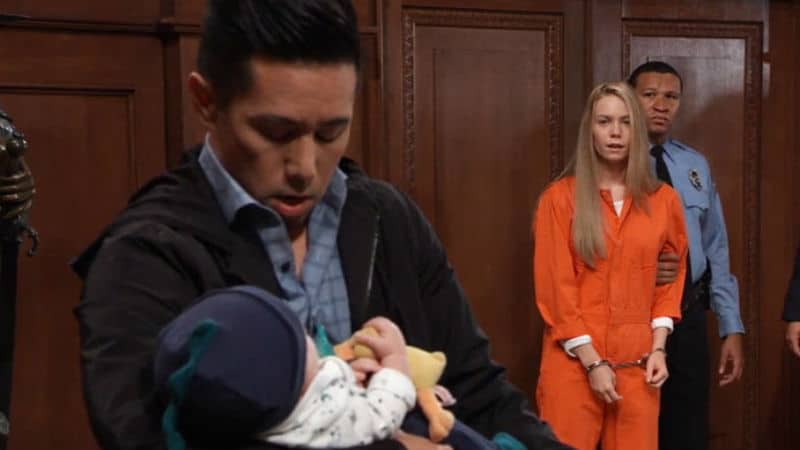 General Hospital fans are on the edge of their seat waiting for Nelle (Chloe Lanier) to drop a bombshell that could ruin several lives among Port Charles’ finest. Will she or won’t she?

Friday’s cliffhanger was a jaw-dropping sequence of events that stacks the deck for today’s dramatic action in the courthouse. Nelle was there to testify about her evil-doing, but at the same time, she managed to dig her deceptive knife further into baby daddy Michael (Chad Duell) and Carly (Laura Wright).

Dressed to the nines in her orange jumpsuit and prison bracelets, slimy Nelle informed these two that she had something important to tell them, and then, all hell broke loose!

She locked eyes with Brad (Parry Shen) who happened to be holding “their” baby, Wiley aka Jonah. Who was more gobsmacked, poor Nelle or stunned Brad?

It was hard to tell, but Nelle walked over and called the baby by his name, which made Carley’s hackles rise up and she got a puzzled look on her face. How does Nelle know about this little one?

Of course, she’s the one who birthed the baby, duh! But, that’s a secret between her and Brad for now.

Nelle leaves it up to fate. #generalhospital #gh

Nelle looked very motherly at the babe in Brad’s arms. Brad looked like he wanted to flee, but stood his ground. The reason he’s at the courthouse is to get a passport for the baby, presumably so they can flee the country and any legal jurisdiction?

Everything climaxes on Monday when Nelle must make a decision. Does she buckle and decide that she wants to keep her beautiful baby? Or, is her hatred of the Corinthos clan stronger?

You do not want to miss a single minute of the action as delivers her own devious verdict in the courthouse!