As Showtime’s new limited series “George and Tammy” lays out, George Jones and Tammy Wynette may have had a messy personal life, but they made beautiful music together. Michael Shannon and Jessica Chastain play George and Tammy, respectively, in a musical drama that’s filled with, surprisingly, a lot of facts. (It might not be that shocking considering it’s based upon their daughter Georgette Jones’ own memoir.) Creator Abe Sylvia’s six-episode series isn’t afraid to show the toxic love between the pair, as well as their individual high and low points.

But with a series like this, liberties are of course taken. So what’s real and what’s fiction?

Was George and Tammy’s first meeting that disastrous? (Possibly) FICTION.

The first episode sees Tammy Wynette meeting George Jones after a night of hard partying on his part. Knocking on his hotel room door Tammy is greeted by a half-naked woman. Jones and Wynette proceed to attempt to have a discussion about touring together while he’s in bed with two women. This might be something Georgette Jones talks about in her memoir but it’s not a story that’s popping up in any articles or online research about the pair’s first meeting. The most commonly repeated story is that the pair met in a recording studio in the late-’60s before deciding to go on tour together. No doubt this hotel room scene better encapsulates Jones’ rollicking ways.

Did George Jones really cause his tour bus to crash after firing a gun inside? (Possibly) FICTION.

In another example of Jones’ quick temper, especially when he was drinking, we see how a fun time with his bandmates almost leads to a fatal car crash. Jones, at one point, pulls out a gun and proceeds to start shooting holes in the roof of his tour bus. The driver, scared out of his mind, crashes the bus leaving Tammy and her then-husband, Don Chapel (Pat Healy), to pluck Jones from the wreckage and give him a ride home. This appears to be a way to bring George and Tammy closer together quickly on the show, but there’s no other information out there about this ever happening.

Did Tammy Wynette and George Jones declare their love for each at the family dinner table? FACT.

Episode 1 concludes with George being invited over to dinner at the Wynette/Chapel homestead only for an argument to ensue between George and Don. George gets angry and declares his love for Tammy, before asking her to take her daughters and leave with him. This is actually what really happened, albeit the circumstances are a tad different. According to biographer Jimmy McDonough’s book “Tammy Wynette: Tragic Country Queen,” Wynette’s three daughters came down with food poisoning and had to be taken to the hospital. Jones showed up and supported Wynette through the ordeal and came to the Wynette/Chapel house the next day for dinner. 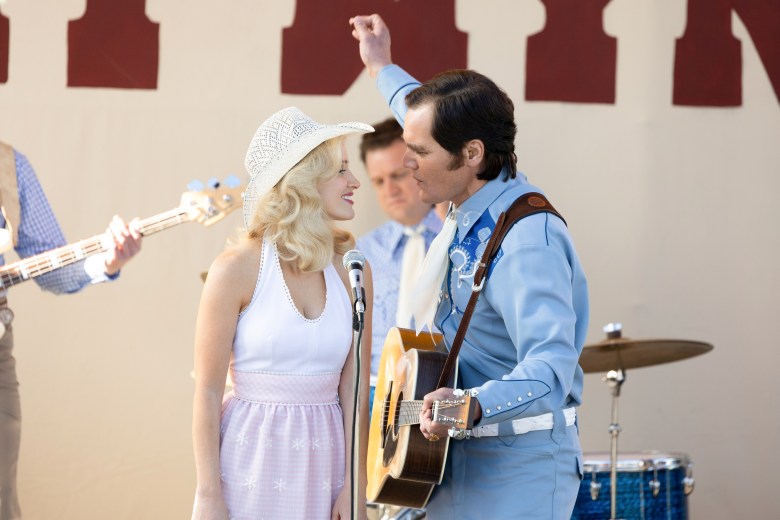 It’s here where the argument between Chapel and Jones started. Chapel started speaking derogatorily to Wynette and as Jones laid out in his autobiography, “I felt rage fly all over me. I jumped from my chair, put my hands under the dinner table, and flipped it over. Dishes, utensils, and glasses flew in all directions. Don and Tammy’s eyes got about as big as the flying dinner plates.” The TV series keeps the basic facts and streamlines them, while also firmly situating Jones as the hero in the situation.