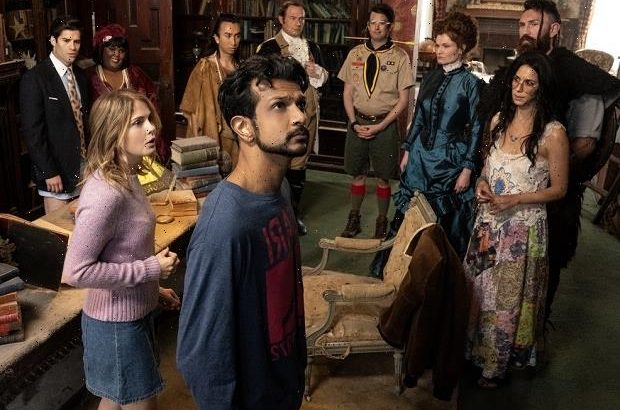 When it comes to TV spirits, we’d run in the opposite direction from anything on, say, Evil. But we totally wouldn’t mind being haunted by CBS’ Ghosts, which delivers laughs more than frights in its debut.

Based on the BBC One sitcom, the two-episode premiere begins with Manhattanites Sam (played by iZombie‘s Rose McIver) and her husband Jay (Never Have I Ever‘s Utkarsh Ambudkar) discovering that her great aunt left behind a big estate. Jay’s hesitant to uproot their lives, while Sam is excited about the free mansion she just inherited. 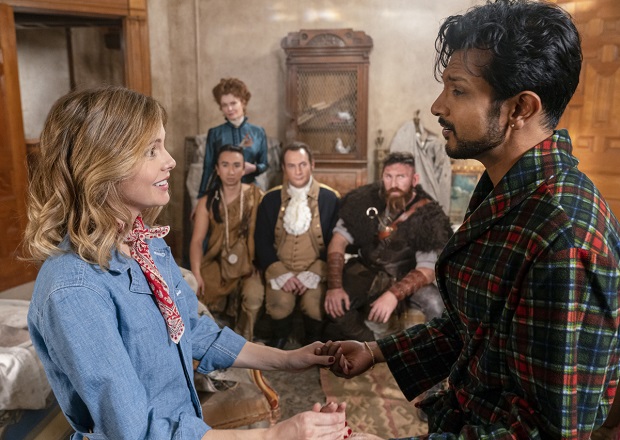 When Sam and Jay first arrive, the ghosts are thrilled by the prospect of a fun, young couple to watch (and something to do besides listening to each other’s daily lectures). But their excitement soon turns to horror when they learn that the pair are planning to turn the place into a hotel, which means it will be overrun by people constantly walking through them (aka the worst pain for a ghost). They decide to haunt “the livings” to scare them off. The plan is for Thor — who was struck by lightning — to make the lights flicker a little, and when Sam and Jay walk through Isaac, they’ll smell how rank he was when he died of dysentery. Meanwhile, Trevor will just barely knock over something after exerting all his energy, and Alberta will hum a “spooky” ditty. 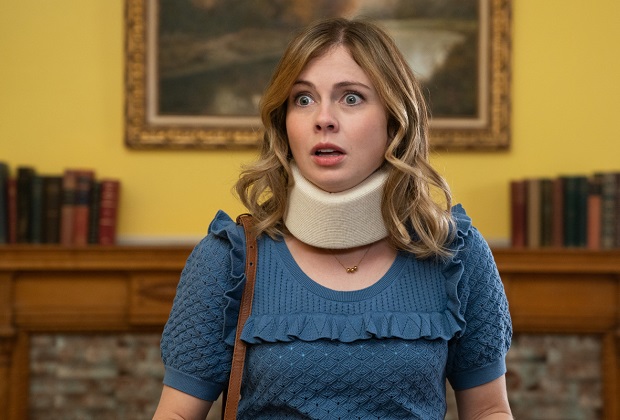 Instead of being frightened, Sam and Jay accuse each other of farting, then later get into an argument. He thinks they’re in way over their heads with how run-down the place is and wants to go back to Manhattan. An upset Sam storms off and trips over the vase Trevor knocked over, stumbling down the stairs. When she wakes from a coma two weeks later, Jay surprises her with the news that he hired contractors to fix up the estate. But Sam gets an even bigger surprise when she can suddenly see all the ghosts and communicate with them.

After that, the ghosts pester Sam so that she’ll acknowledge them and acquiesce to their request that she and Jay call off the hotel remodel. They keep bombarding her to the point that Sam Googles “psychotic break” and goes to see a doctor, who turns out to be a ghost, too! This is reassuring to Sam, though, because if she’s seeing different ghosts at different places, then they’re not just in her head. Jay, of course, is disbelieving of his wife’s new abilities until she takes him to the basement full of ghosts who died of cholera. Relaying the spirits’ detailed instructions, she dictates to Jay how to fix the boiler. And how could she possibly know how to do that if the ghosts aren’t real? 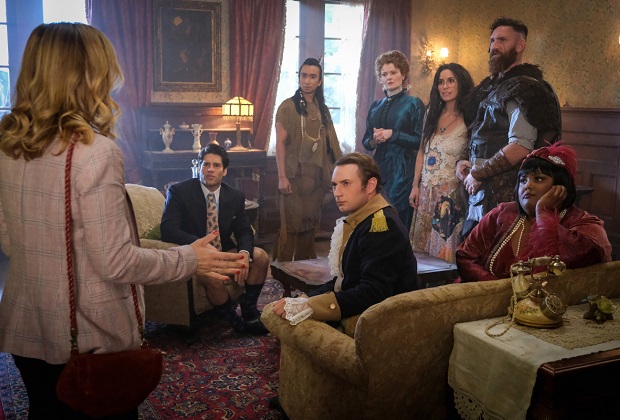 Sam also finally acknowledges the upstairs ghosts and asks each of them what he or she wants, since they can’t go on cohabitating the way they have been. Having learned that he’s just a footnote in history while his rival Alexander Hamilton went on to become famous, Isaac requests that freelance writer Sam pen his biography and adapt it into a musical. The others chime in with their requests — world peace for Flower, the return of the Vikings in the “sorcerer’s window” (aka TV) for Thor — and for now, the livings and the dead seem to have reached a peace treaty of sorts.

What did you think of Ghosts‘ premiere? Grade it below, then hit the comments!